During the time I’ve been driving this 2020 Infiniti QX50, I’ve touched on the subjects of its VC-Turbo engine and CVT transmission and the combined performance they deliver, fuel consumption, comfort, the interior’s instruments and level of luxury, cargo space and on-road behaviour. That leaves the most superficial but by no means least important element, the looks of the thing. Today we turn art critic and examine its esthetic appeal and what we’ll call the capital of sympathy it enjoys.

Winning arguments
In touching on the physical looks of the QX50, I know I’m tiptoeing into a minefield. Beauty in the eye of the beholder and all that. But still, let’s be honest, when a Hollywood actress takes the stage to accept her Oscar wearing an outfit that makes jaws drop, few will wish she’d dressed in flannel PJs instead.

Of course, some folks might actually prefer flannel PJs – who’s to say? Maybe to them it’s the height of elegance. But for the (more-or-less silent) majority, that’s not so.

In any event, there are moments we all come together before an object and declare as one that it is beautiful. Or not. I humbly submit that the QX50 is one of those objects. It’s very attractive. Period.

Its beauty comes from its winning mix of boldness and overall harmony. Examples of the first are the broken line of the rear fenestration and the skillfully curved metal. As for harmony, you find it in the proper proportions of what I’ll call the HIT combo: the hood, interior and trunk. These three key elements, sitting on wheels that are at once sporty and elegant, effectively communicate dynamism.

While it’s not to the point of giving this SUV the appearance of being a speeding-ticket collector, the QX50 does make it clear it assimilated the concepts of speed and agility prior to its silhouette and lines being locked into place.

More specifically, the inspiration for the major revision of its outer shell thet debuted with the 2019 edition can be traced to two prototypes: the QX50 Concept and the QX Sport Inspiration. To the designers, I say Well done! When I’m done with this long-term test drive I’ll miss the muscle-bound hood, the roofline that suggests speed without even moving and the cavernous trunk.

A question of image
Now about that capital of symphony I mentioned.

By this I mean: that consumers often choose a brand for what it says about them. The brand’s image suits our own. The reputation that brand enjoys enriches the buyer’s.

For example, look no further than Lexus, with its brilliant name that suggests exceptional Toyota reliability wrapped in a luxury cocoon. Or Mercedes-Benz, indelibly associated with century-old automotive expertise. BMW, once a brand associated with the so-called ‘yuppy’ demographic, has cemented a reputation for delivering very distinctive on-road performance.

Other brands continue to work very hard at crafting and recrafting their image. Some, like Cadillac and Lincoln, are saddled with a heritage that’s rich but has become heavy to bear. The top brass at those companies have the daunting challenge of modernizing their image without throwing tradition overboard.

Ok, where is Infiniti in all this? Well, when I say Infiniti to you, what do you think of? Nothing in particular, right? In my many years of working in this business, I have always followed with interest the progress of the luxury divisions created almost simultaneously by the big Japanese automakers: first Acura, in 1986, and then Lexus and Infiniti in 1989. 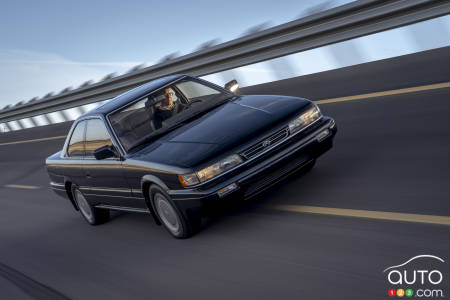 Some 30 years later, Lexus with its 10+ million vehicles sold has sprinted far ahead of the others. Meanwhile both Acura and Infiniti have attempted at various times to redefine their brand image so that consumers have no trouble answering right away when asked what the name evokes. But each time, there have been hiccups and failures. In 2019, Infiniti even announced it was effectively pulling out of Europe to focus on North America and China.

While it produces exceptional vehicles, Infiniti still has much work to do educate and seduce consumers. Here’s a telling anecdote: not so long ago, Nissan Canada’s head of public relations Didier Marsaud confided to me that some of my colleagues in the media were still referring to the automaker’s luxury brand in print as… Infinity.