Nice, France – For 2020, the Jaguar XE compact performance sedan has been given a comprehensive once-over by the manufacturer, with a focus on a more aerodynamic design, more luxury and more tech. Indeed, the compact luxury sedan segment is a tough nut to crack what with perennial leaders the BMW 3 Series (new for 2019) and the Mercedes-Benz C-Class consistently upping their game, not to mention the AWD chops displayed by the Audi A4.

Well, the XE certainly has the AWD part covered: for 2020, the only way you’ll be able to get one in Canada is with AWD; the RWD version has been dropped for this year in North American markets (though European markets still get one). 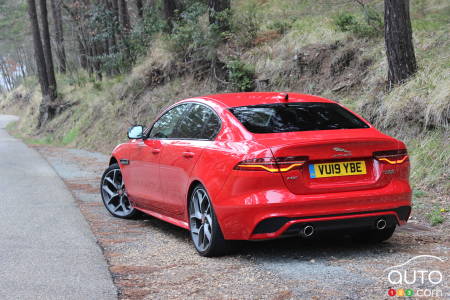 Not popular enough, the V6 is gone
Jaguar has also reduced the trim count for 2020, offering just two models: the SE ($49,900), and the R-Dynamic SE ($55,800). Both are powered by a turbocharged inline-4 cylinder in different states of tune. Yes, if you know the XE you’ve thus noted that the V6 has been dropped for this year. According to Jaguar, this was a response to the V6 not enjoying much of a take rate in many markets – mainly those in Europe.

The diesel engine has also been scrapped, leaving the regular 4-cylinder to do the heavy lifting both in the performance and driving-efficiency departments. Power is rated at 247 hp for the P250 model and 296 hp for the P300 model, with the two making 269 and 295 lb-ft of torque, respectively.

A number of styling updates have been applied that work both as form and functional additions. The new headlights are slimmer, the grille is wider and all four corners of the bumpers have been shaped to provide better aero, combining to lower drag from 0.26 cd to 0.25. That’s not a huge amount, but Jaguar insists that every little bit helps. There are also new wheels for 2020 ranging from 18-20 inches, with the two-tone 20-inch wheels on our tester being the best of the bunch. 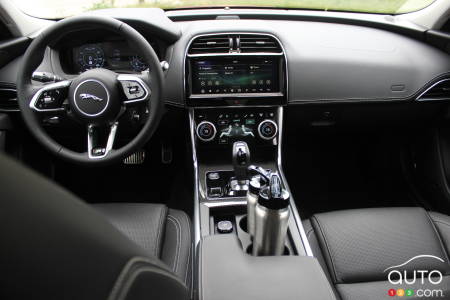 An interior that pampers
Inside, special attention has been paid to make the XE feel more luxurious. The presence of hard plastics has been greatly reduced and mainly replaced by high-quality soft-touch materials and leather. Performance is one thing at this level, but you need to coddle your occupants, too.

Up front, the seating position is actually spot on, with the sport bucket seats being supportive without being too grabby. Thanks to a power tilt and telescoping steering wheel, even those like myself with what I call “T-Rex syndrome” – long legs with disproportionately short arms – you aren’t left feeling like you have to reach out and hang on to the wheel for dear life. Which wouldn’t be a terrible thing, necessarily, as the wheel is all-new to the XE (but borrowed from the I-PACE), chunky and leather-wrapped.

The one thing I did find, however, was that the heels of my palms would often hit the wheel-mounted voice-command activation button. Worse still is how the system ignored my “cancel” command, forcing me to ask my passenger to reach for the “x” button on the touchscreen so I could get back to my navigation screen, my music or what have you.

Rear seat legroom, meanwhile, is roughly on a par with the competition, but headroom has taken a hit back there, noticeably lagging behind the likes of the C-Class and 3 Series. The trunk is also a little snug – we barely fit two carry-on sized roller boards in there – but the rear seat does split 40/20/40 to add a little more flexibility for hauling your wares. 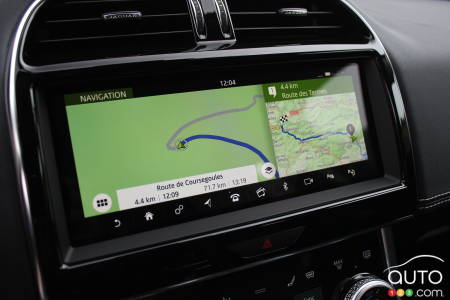 For 2020, the biggest interior addition is that of Touch Pro Duo infotainment. We’ve seen it before on the likes of the Range Rover Velar and Evoque, but now it migrates for the first time to a Jaguar. Essentially, Duo is a dual-screen set-up whereby the upper 12.3-inch screen provides access to all your navigation and communication needs (as well as Apple CarPlay and Android Auto – there’s also wireless charging), while the lower screen acts in a bit of a supporting role, allowing you to skip songs and so forth.

It looks very slick (the climate dials either side of the lower screen are also digitized and control either your main climate control or your seat temp by either pushing or pulling on them), and while I thought it would be a massive fingerprint dumpster, Jaguar has coated the screen with material that keeps this to a minimum.

The whole set-up, meanwhile, is complimented by an all-digital gauge display that’s incredibly crisp and intuitive, and changes depending on which of the four drive modes (Comfort, Dynamic, ECO and Weather) you’re in. I’m especially a fan of the way you can display your navigation map in between the gauges; the TFT display there is large enough that it’s actually usable in this capacity.

The Meridian audio system, meanwhile, is more than usable; the sound is incredibly crisp and without distortion, your bass and treble tones hitting all the right notes. It’s made all that much easier to enjoy thanks to the impressively quiet cabin. Even under full acceleration in the louder Dynamic mode and banging through the gears, my passenger and I had no problem carrying on at normal conversation levels.

There’s also what Jaguar calls a “ClearSight” rear view mirror. With a flip of the tab usually reserved for activating a mirror’s glare-reduction mode, the rear view becomes a screen. GM’s been doing this for a few years now and the tech makes sense in SUVs, often heavily laden with people and their wares that can obstruct your rear view.

I did find that my eyes had a hard time adjusting to the perspective through the mirror-become-screen, as the image is different than what we’re used to. No matter how hard I tried, there was a moment of delay as my eyes focused. This may be something that gets easier over time, but each time I tried it here, I reverted back to the traditional mirror fairly quickly. 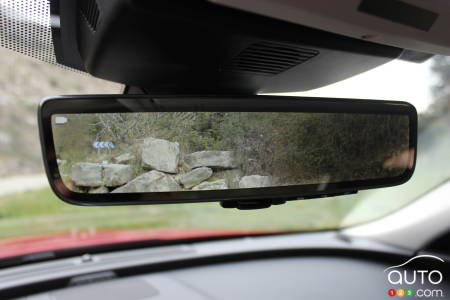 The drive
Of course, that rear-view mirror really became an afterthought as we proceeded to attack the unfamiliar – but spectacular – roads of rural southern France. I could swear I’d seen those sectional concrete “guardrails” and tunnels before while watching footage of Subarus and Lancias careening over the tarmac on the Monte Carlo rally. Just miles and miles of winding, spidering and undulating roads that are a supreme test for the balance of any car.

In the handling department, the XE responded well here. The AWD drive is mostly rear-biased, and the system can send up to 100% of power to the rear wheels alone. So what you have is a car that feels like it’s rear-wheel drive when driven at or near the limit, but one that uses brake-based torque vectoring to scrub off speed and get the nose back on line if you push things too far. I could spend hours just flowing over these roads, allowing the XE’s well-tuned springs and dampers carry me through with utter confidence and encouraging me to push just a little bit harder.

I was also compelled to keep the 8-speed auto in paddle shift-activated manual mode for pretty much the duration of my drive. Upshifts are clean and crisp, but I have to say that downshifting took a little longer than I would expect of a system like this.

Stick to Dynamic
I noted that the delay between gears – both during downshifts and upshifts – is magnified when in anything other than Dynamic mode, activated via a toggle switch left of the shift lever (replacing the previously used buttons). In the other modes, the gear changes are meant to be a little slower so as to not jar you too much, but I just found it slow. I much preferred to leave it in Dynamic as the progress through the rev band felt much smoother. 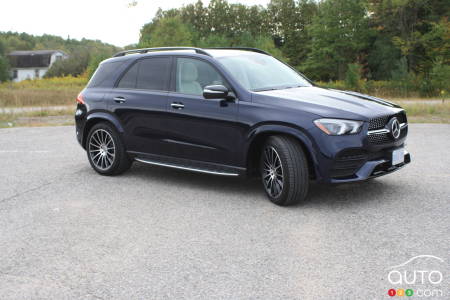 Unfortunately, you can only push so hard with the power that’s provided, especially if we’re talking about the P250 version. Even under foot-to-the-floor acceleration, I wouldn’t say the XE ever really blew my socks off in terms of acceleration. That may seem a nit-pick, but I tested the V6 version – back when that was a thing – and found it a properly fast thing that could compete with the more established entries in the segment.

I fear this version will have a tougher hill to climb in that regard. Then again, Jaguar-Land Rover has confirmed that they’re developing a new, hybrid inline-6 power plant that could be just the ticket for the XE.

Of course, with that larger engine will come more weight, and part of me would hate to see the XE’s 50:50 weight distribution affected by that, as it truly has a wonderfully sorted chassis at its disposal. It is truly the highlight of the package that should give pause to what’s offered by the competition in that department.

As far as the power goes, I guess you can always use more of it, but the XE is so well-sorted in the handling and NVH departments that I guess it does a good job of disguising the mild power on offer. Hard to fault it for that. 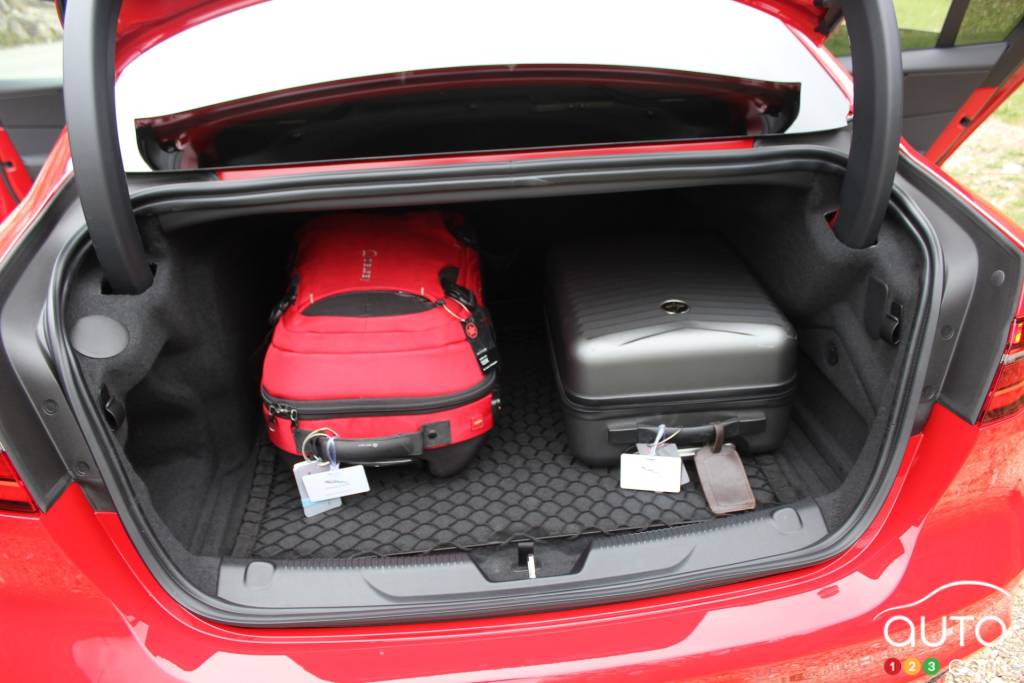 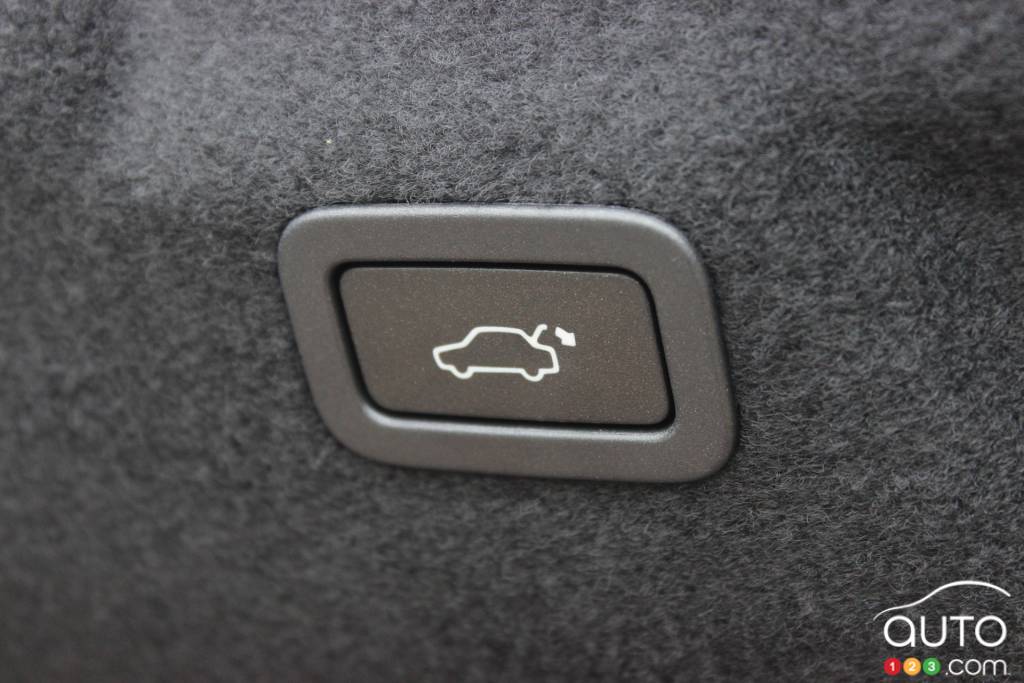 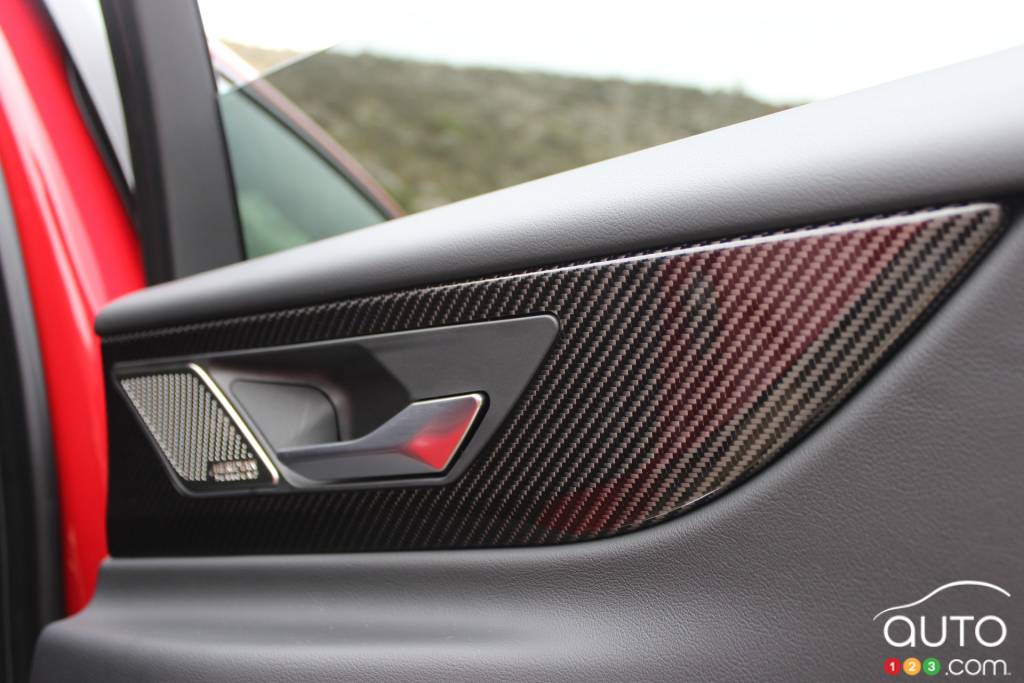 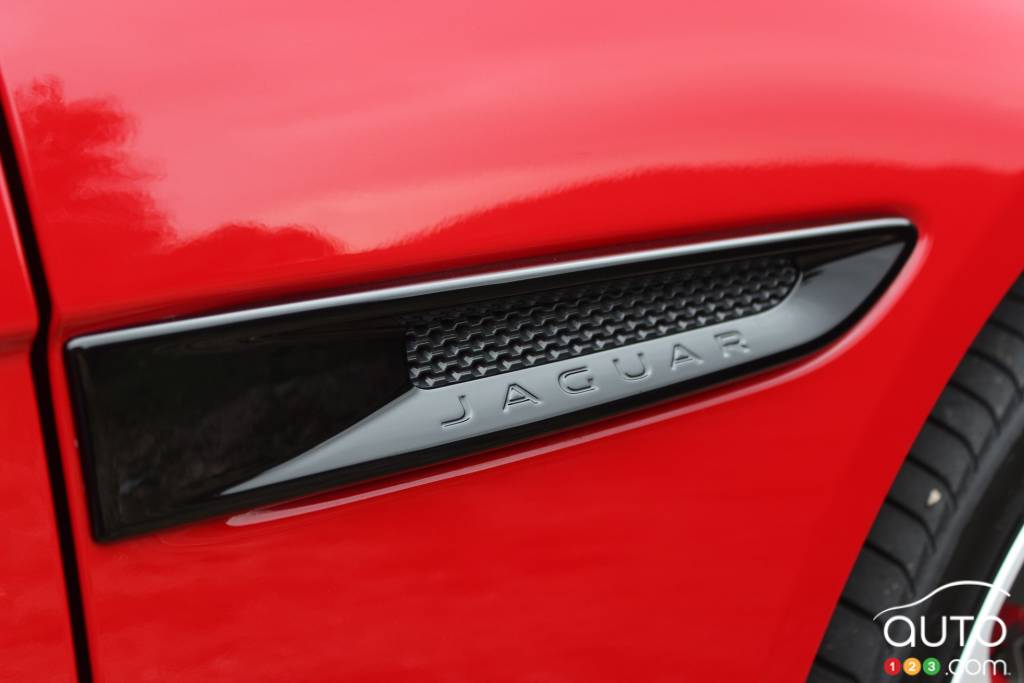 Jaguar has shared a few details and images of the new 2020 Jaguar XE in unusual style, by calling on the talents of an artist specialized in hyper-realism. T...

The most extreme Jaguar ever is coming soon!

Not satisfied with the 575-hp F-Type SVR, Jaguar is announcing a new performance model for the street that’ll be even more powerful and formidable. Say hello...