Here’s an understatement for you: Porsche does virtually nothing like others across the industry. In fact, the German automaker has always made a point of thinking and doing things differently, much to the delight of those who love difference... and pure driving.

Within the company’s engineering and design studios, half-measures simply are simply not part of the vocabulary. Everything Porsche produces generates emotion, from the sporty 911 to the Panamera sedan and the Macan and Cayenne SUVs. This is THE signature of the company. It's also what had to be preserved with its newest creation.

New mission
We’ve seen Porsche move quietly but steadily towards electrification over the last decade, first with hybrid products, but most strikingly with the Mission E concept presented in 2015 at the Frankfurt Motor Show. There, in its own backyard, the manufacturer revealed to the world its first all-electric vehicle. It came as no surprise that it would be the ultimate in terms of power and range.

A little less than five years later, the study is now on our roads as a production model. It may have changed its name in passing, but its spirit and "mission" remain the same. At Porsche's invitation, we installed ourselves behind the wheel and took the Taycan 4S from Toronto to Ottawa and back, to determine for ourselves if the newcomer is worthy of the logo it bears.

DNA intact
The program was simple. Make the trip twice between the cities mentioned, with on the schedule a stop in Brockville to test one of the ultra-fast charging stations on the rapidly expanding Electrify Canada circuit.

From the very get-go, the Taycan sends the clear message that it’s a Porsche through and through. Its handling is exceptional, its poise impressive. The feeling of connection it offers with the road is typical of the celebrated sensations delivered by a 911 or a Panamera. In fact, I felt like I was driving a car somewhere in between those two models, though without the sound, sadly. An electronic crutch is available to simulate one, but it's not convincing. This is one sacrifice that has to be made if cars are to go green.

The electrical configuration does have its advantages, of course. For starters, the centre of gravity is lowered and optimized thanks to the positioning of the electric-powertrain architecture. When attacking tight turns or sharp curves, the Taycan invites you to defy gravity... and allows you to do so. It doesn't exactly feel like the tires are sticking to the road, but rather like magnets are keeping the car tight on the ground.

And what to say about acceleration? It's mind-boggling when you dare put your foot down, and keep in mind we only took the wheel of the basic 4S version. Almost scary, it is, but definitely fun. Constant smile on our face fun. And it's just as impressive once you’re at highway speed. At 100 km/h, if you hit the gas pedal, you'll shoot to 130 or 140 km/h in the blink of an eye.

And what's responsible for all this? For that, we look at what's underneath the sedan's distinctive exterior shell.

Photo: Porsche
The Porsche Taycan 4S at a charging station

The cutting edge
Porsche wasn’t getting into the electric car universe with the notion of doing things simply. When you analyze the Taycan's technical specifications, you discover innovative approaches. Listing everything here would be endless and dull for most folks, but a few examples will suffice to give you an idea of the philosophy adopted, and by ricochet of its effectiveness.

First of all, it’s important to know that the Taycan is the only production electric car with an 800-volt architecture, double the general standard. This kind of platform offers several advantages, including a reduction in weight, but more importantly, faster recharging times due to its greater capacity. As for the lithium-ion battery the model harbours, its capacity can reach 93.4 kWh with the addition of the Performance Battery Plus package, which our tester with (otherwise, it inherits a 79.2 kWh battery).

As for the drive train, there are electric motors on both axles, ensuring all-wheel drive. A two-speed transmission is associated with the rear axle to provide maximum efficiency during acceleration, but also to stretch out range when the car is at cruising speed.

Even regenerative braking is different, as 90 percent of regular braking operations are performed by the electric motors. When the brake pedal is depressed, the electric motors become generators. At the wheel, you rarely notice any difference from a conventional braking system, which is not usually the case with an electric model.

And speaking of energy recovery, the Taycan's system allows lightning-fast recharging with ultra-fast terminals. The Electrify Canada system, used in Brockville, Ontario, allowed us to charge up almost completely in just under 30 minutes. Porsche talks about 22 and a half minutes to increase range from 5 percent to 80 percent and that's what we witnessed. Interestingly, with the purchase of a Taycan, the first 30 minutes of any recharging operation is free for the first three years on the Electrify Canada system. Normally, the cost is about $15 per operation.

Once recharged, we benefited from about 370 km of range with our 4S version. 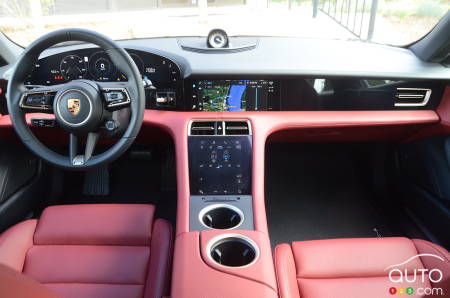 Interior design
Inside, Porsche offers a futuristic presentation, but hasn’t forsaken the classic elements for which it is famous. Gone are the traditional round dials on the instrument block; instead the driver finds round graphics on the curved screen in front of them. The advantage is that you can customize the information displayed and have access to what you want. The downside, however, is that depending on your driving position, you may not necessarily see everything in front of you at once.

A 10.9-inch touchscreen is integrated at the top of the centre console and regroups the multimedia system controls. A third screen is located underneath and provides access to other functions, including air conditioning. To be honest, the latter is too much, as it forces us to take our eyes off the road a little too often to make adjustments.

As for the steering wheel-mounted controls, they're not the most intuitive. Of course, as with any new vehicle, owners will get used to it, but there's clearly room for improvement here. 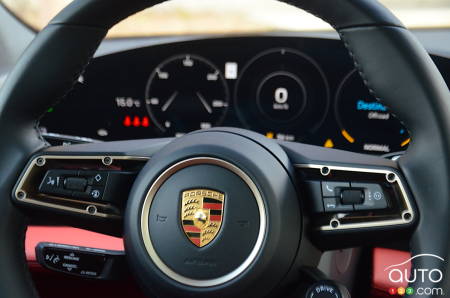 Otherwise, the driving position is perfect and made easier by the many possible adjustments offered with the seats. The quality of the materials and their assembly is also flawless. And because we're dealing with a vehicle with a green vocation, it's even possible to opt for a "vegan" interior in which leather, for example, is absent.

Conclusion
It’s frankly impossible not to come away impressed by the design and the on-road behaviour of the Taycan. As an entry into the world of all-electric cars, it's pretty darn attractive and heralds an interesting transition to other electrified products, as Porsche has promised with the Macan SUV, for example.

- The Taycan has a coefficient of drag of only 0.22, which allows it to split the air very efficiently, resulting in greater range
- The Taycan accepts a load power of up to 270 kW. The Electrify Canada charging stations allow up to 350 kW.
- It’s possible to recover 100 km of range  in just five minutes on an ultra-fast station.
- Different drive modes are offered, including Range, which limits the speed to 110 km/h. The on-board computer informs you range is getting low when you reach the 75-km mark.
- Unsurprisingly, the price tag climbs quickly – this is a Porsche after all. You can get just about everything as an option, including heated seats. Our 4S (blue) version was priced at $163,910, while its base price is $119,400. You've been      warned.

The price of the options
Too many touch controls (e.g. temperature controls)
Cold presentation of the instrument block 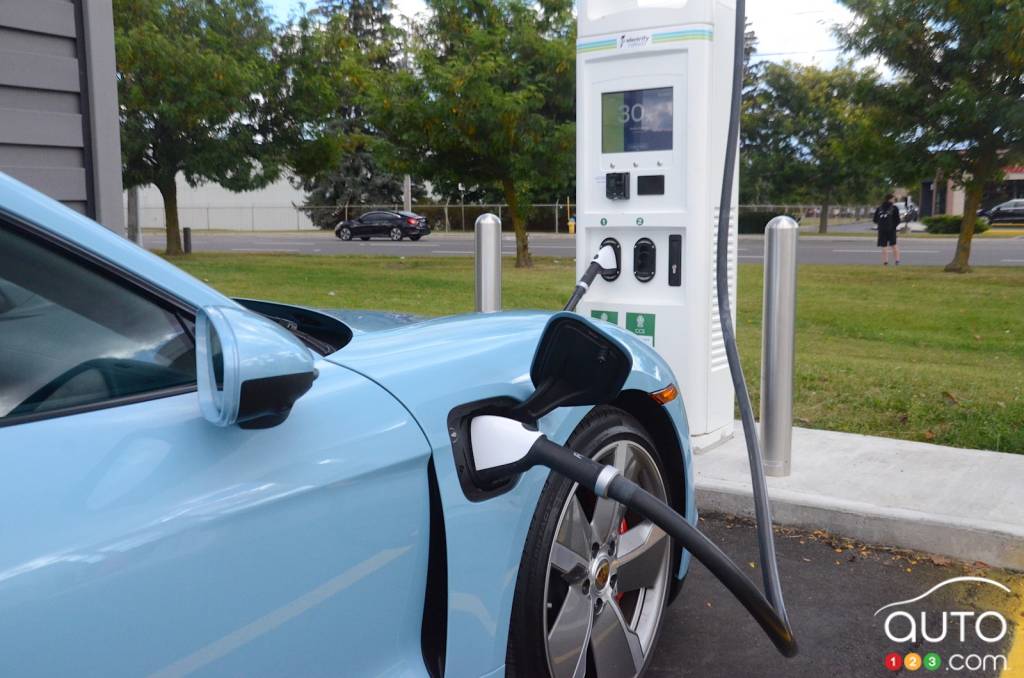 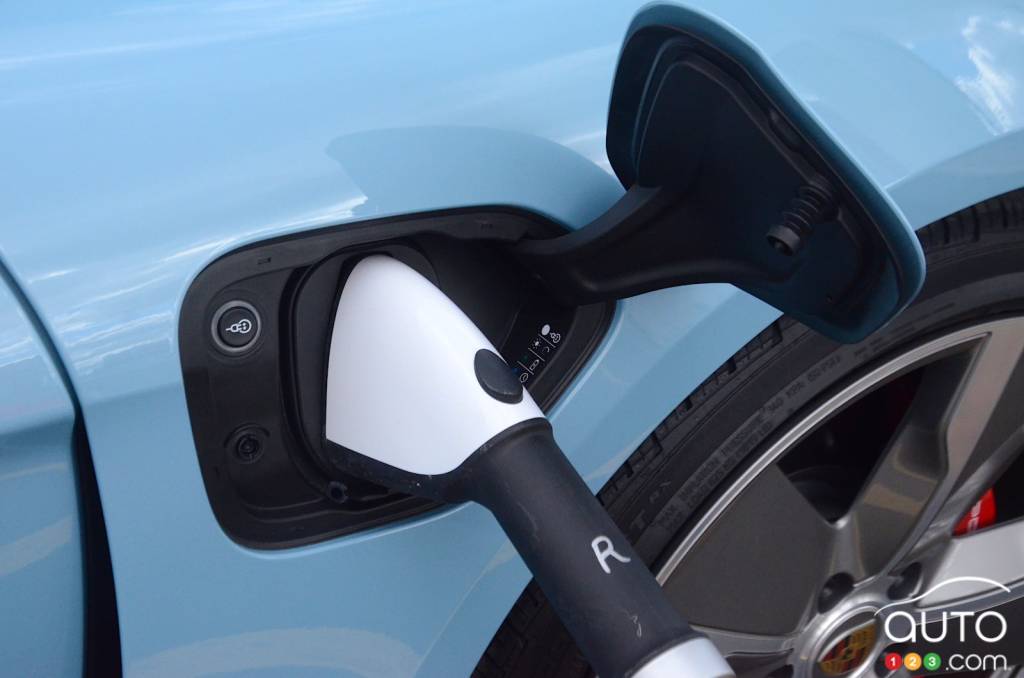 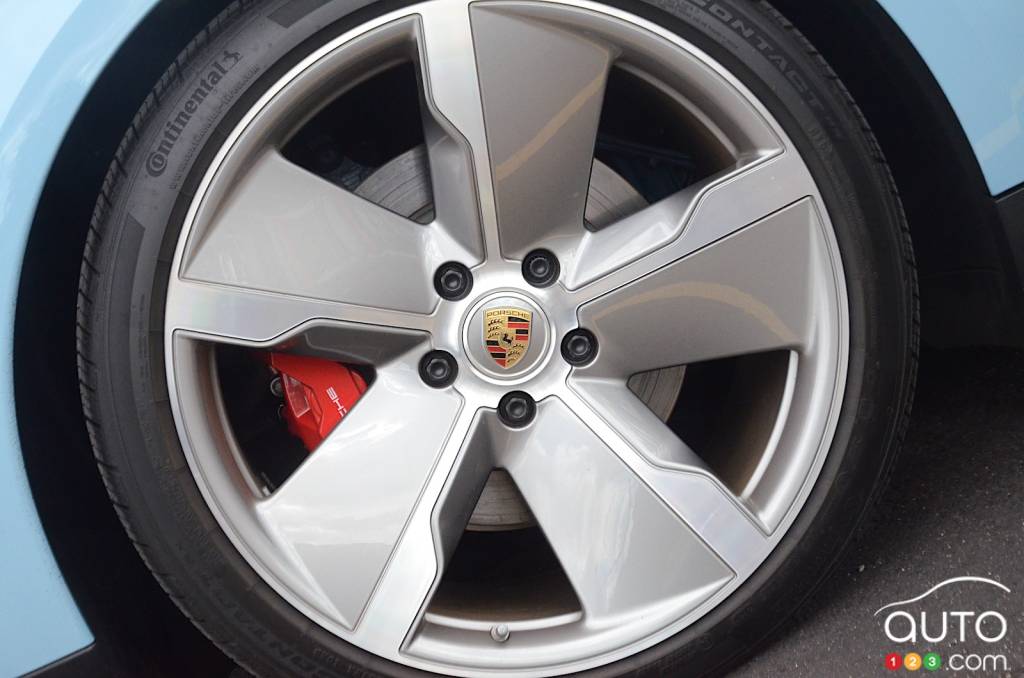 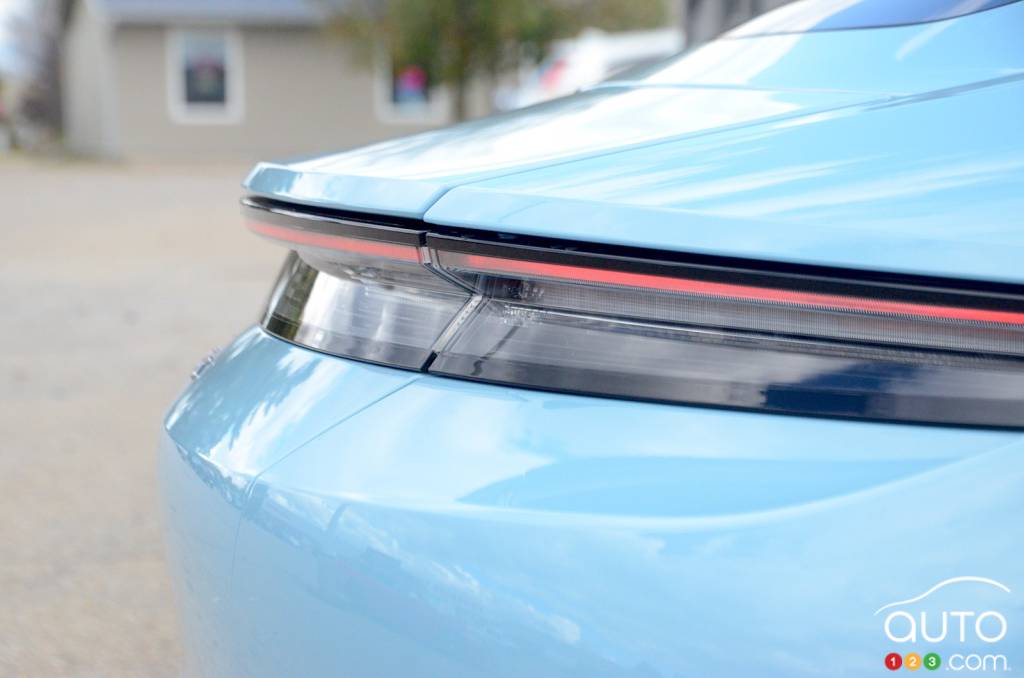