Atlanta, GA - Porsche took its time before wading all the way into the electric mobility waters, but now that it has, its first all-electric vehicle is nothing short of spectacular. After a long, impatient wait, we finally got to go meet the thing.

Porsche first announced its intentions with the E-Mission prototype, which gave an idea of the orientation the company was taking and collected its fair share of acclaim from automotive journalists. The Taycan that Porsche now proposes descends directly from that concept. The German automaker had to quickly adjust its original production schedule of 20,000 units in the first year to 30,000 due to demand, and it may well reach 40,000 once the assembly line putting the Taycan together has reached its cruising speed.

A genuine Porsche
The engineers and brand representatives on hand for the launch event emphasized the importance through the long development process of maintaining the very nature of a Porsche car, even in an EV. Which meant it had to be sporty, fast and powerful, whether it ran on electricity or gas.

To this end, the Taycan underwent multiple tests including a rigorous endurance test on the Nardo track in southern Italy, where it covered 3,425 km in the space of 24 hours. The Taycan then scored a record lap time of 7m 42s on the famed Nurburgring track. That’s as fast as a 911 GT3. 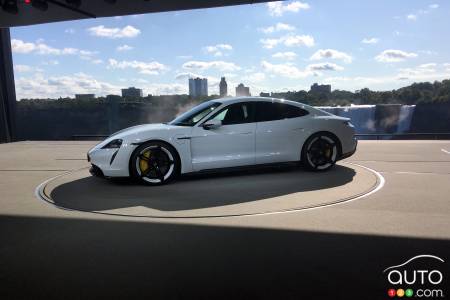 Turbos – what?
Porsche will offer the Taycan in two versions, the Turbo and Turbo S - names that may seem strange considering that we’re dealing with all-electric vehicles here. Porsche explains this was done to retain a way to rank different levels of performance that’s familiar to customers.

The base turbo version will benefit from 616 hp, plus there’s an "overboost" function that allows for a short added burst of power (for instance to overtake another car or on-ramp onto a highway), bringing the total of horses to 670, all via the push of a small button in the console. Just as impressive is the torque at 626 lb-ft.

The S-turbo offers staggering statistics, based on the same battery pack; here, push the button for the Overboost and you get up to 750 hp, and 774 lb-ft of torque. On this day we experienced the devastating thrust of the electric powertrain, which takes the car from 0 to 100 km/h in 2.6 seconds. It’s difficult to breathe when you accelerate that fast. The base version takes 3.0 seconds for the same exercise. To get to 200 km/h, it takes less than 10 seconds in the Turbo S, and the quarter mile takes 10.8 seconds.

I remind you that we’re talking here about an electric vehicle. The numbers surpass what you get from the fastest Tesla, but the numbers don’t tell the whole story. The drive in general is light years removed from that of any Tesla. 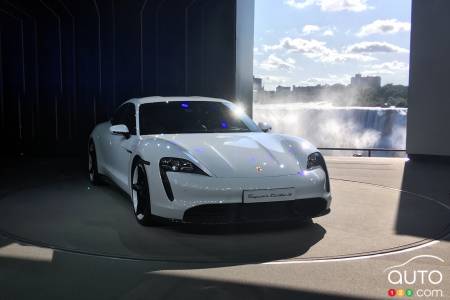 Family resemblance with the Panamera
If you glance quickly at the Taycan, you see some similarities with the company’s Panamera. Total length verges on 5 metres and the car is almost 2 metres wide.

The battery pack is made of 33 modules (each with 12 cells) and located under the vehicle; it offers a total capacity of 93 kWh.

The basic setup of the suspensions comes from the Panamera but with a different configuration due to the electrical nature of the Taycan and its electric motors located at the front and rear.

Like the Boxster, the Taycan has two cargo spaces at the front and rear. The trunk at the front has a capacity of only 80 litres but to worry, the rear one offers 400 litres of cargo possibilities.

Those two electric motors, meanwhile, mean that you’re entitled to an AWD vehicle. The batteries are 76 kg at the front and 170 kg at the rear to ensure the best possible weight distribution. The permanent-magnet motors operate with a 2-speed gearbox capable of handling both the enormous power available and the high top speed. The difference in power between the Turbo and Turbo S model comes from the more-powerful front battery in the latter model. 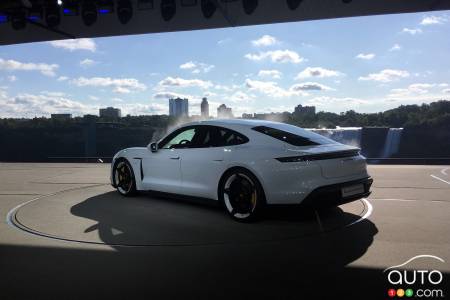 Futuristic cockpit
The origins of digital cockpits in Volkswagen Group models can reasonably be traced back to the Audi TT. Porsche includes here a configurable dual-screen in front of the driver and in the centre console and goes a step further with an (optional) third screen for the front passenger.

The angled display in front of the driver can reproduce the rounded gauges of more-traditional models like the 911, but can also show a full-size topographic map. The 11-inch central screen is for the multimedia system and sits above another 8.4-inch screen that handles temperature adjustments. The optional passenger screen gives that occupant access to the music menu, leaving the controls of the car to the driver (to the disappointment of side-seat drivers everywhere!).

You also have Mercedes-style voice commands, where you can give orders after starting with “Hey Porsche”. Apple CarPlay and Android Auto is included as well, but there’s a twist: Porsche is adding a new feature, making the Taycan the first car in the world to offer Apple Music.

What’s Apple Music
You already know Apple CarPlay. With Apple Music, users have instant access to almost 50 million songs, by title, by artists, by genre. You can, simply by pressing the + key, add songs to your personal list. You can request your favourite songs or groups via voice command; or you can request to hear only Queen songs for the next four hours. There’s also Radio Broadcast, by which you can listen via Apple Music to radio stations from all over the world.

With so many screens in the cockpit, there are few buttons, making for a streamlined sporty interior.

Just a little track time
Our driving time with a prototype Taycan (still slightly disguised) took place on a track at Porsche HQ in Atlanta, at the far end of a landing strip at Atlanta’s international airport.

To convey to us the potential of the beast, the driver started the car using a push-button to the left of the steering wheel, as per tradition. He then put the vehicle in Sport Plus mode (by simultaneously pressing the accelerator and the brakes) and within a few seconds later, our eyes were traveling backwards towards our ears. The thrust is phenomenal. At just past 80 km/h, the 2nd speed of the gearbox kicks in for another boost. 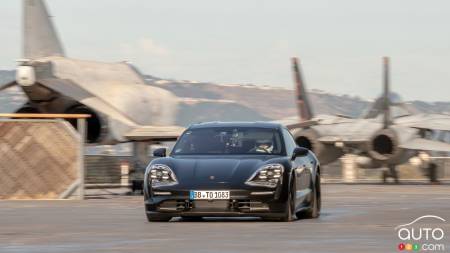 The other 10 minutes consisted of a few laps of the circuit, with a little drifting to demonstrate the sporty character of the car. The chassis is extremely solid and the steering is very intuitive. Like all other Porsches, it’s possible to completely deactivate the electronic driving aids.

The 21-inch wheels of our Turbo S (20 inches on the Turbo) stick very hard to the asphalt. Due to the absence of a combustion engine, driving is very quiet, and the Taycan offers far superior comfort than what you get in a Tesla. But push the machine and it becomes a real beast. Even the little whistle sound that comes from the electric motor is pleasant; with Sport Plus mode, the sound becomes a little more serious and almost gives the impression of having an engine (almost; it’s still muted).

Not a Tesla, no way, no how
To understand the difference between Tesla and Porsche, know this: Tesla is fast because of the battery. Nothing special was done to enhance handling, and fit and finish is average. Porsche built a sports car than handles like a real Porsche, but powered electrically.

Daily driving
The Taycan can be recharged on 800-volt charging stations. Porsche has committed to installing one of those in each dealership and plans to add 600 stations more in Canada by the end of 2020. This terminal allows for charing 100 km of range in 5 minutes. If your battery is at 30% of its charge, it will take 22m 30s to get an 80% charge in good weather conditions. There are currently 32 terminals of this type in Canada and 268 in the United States. For most owners who will have a Level 2 (240 volts) plug available at home, the time to recharge will be approximately 11 hours.

Conclusion
With the Taycan, Porsche makes a brilliant demonstration that it is possible to keep all its sports genes in a 100% electric version. The first models will arrive in Canada in the first quarter of 2020 and we have just received pricing for Canada for the two models: The Turbo will sell for $173,900 CAD, while the Turbo S will go for $215,000 CAD. 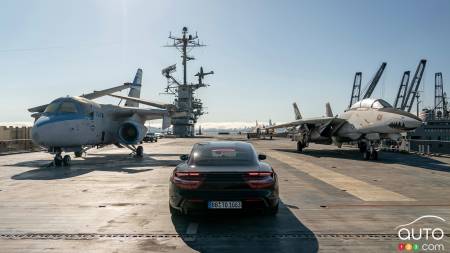 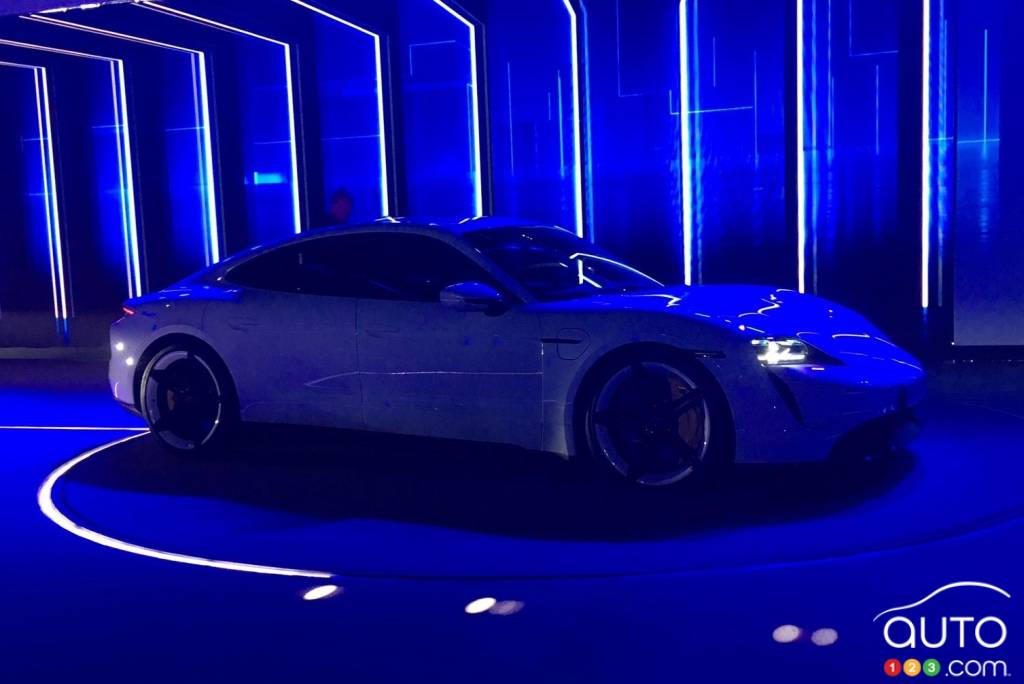 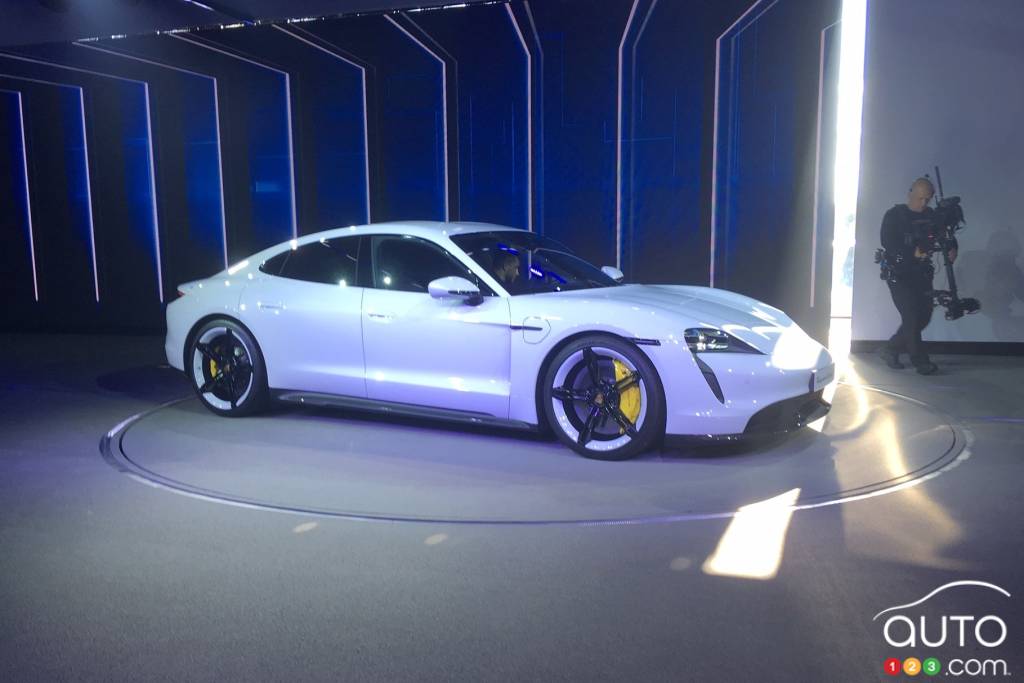 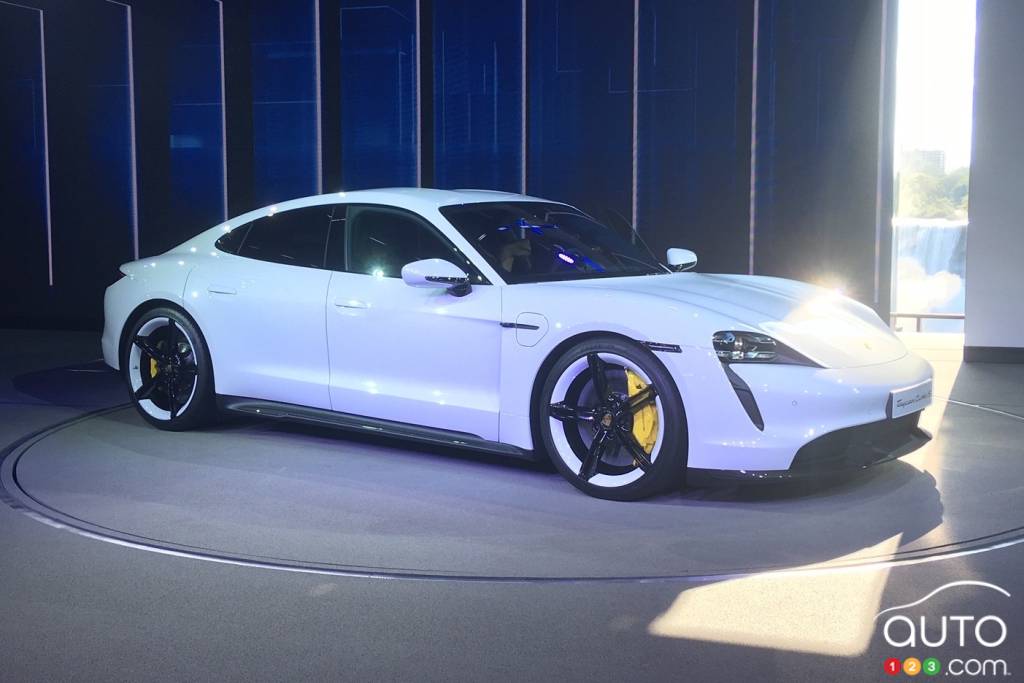 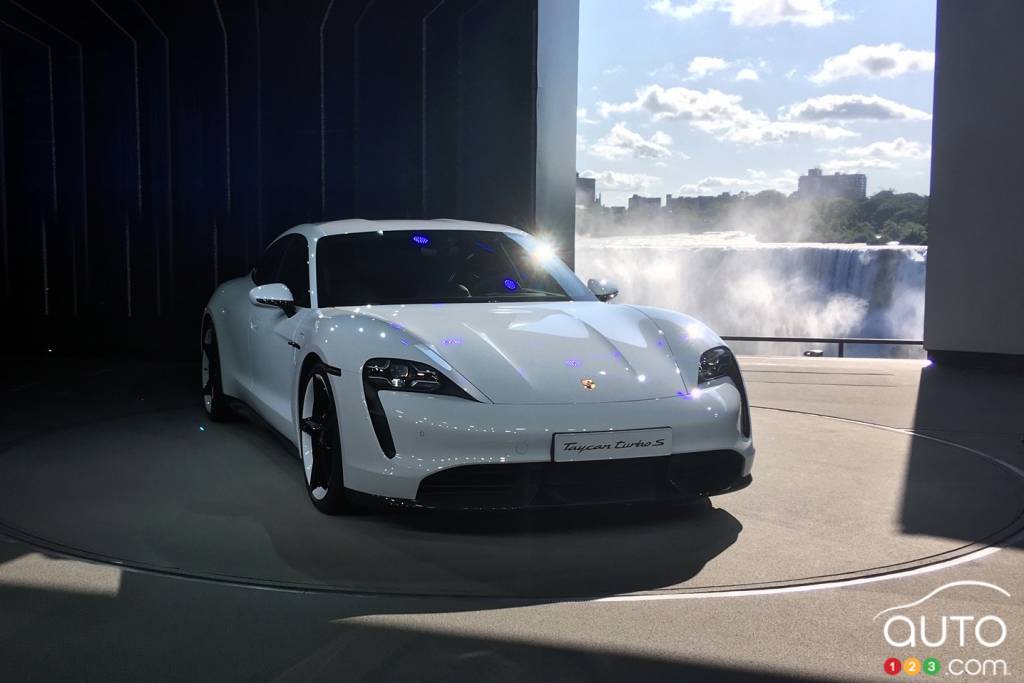