Auto123 reviews the 2021 Dodge Charger SRT Hellcat Redeye, you know, just in case anyone’s thinking of putting it on their Christmas wish list.

The Dodge Charger was originally born a coupe, and what we have here is a four-door sedan so, literally, they don’t make ‘em like they used to.

They certainly do not, but in the case of this particular Challenger SRT Hellcat Redeye, they make them better. They make them louder. They make them bigger. And above all else, they make them… insaner? That’s not a word, I know, but forgive me as my brain is still a little scrambled after experiencing what is probably the most off-the-wall car I’ve ever driven when not on a track. Heck, I don’t think I’ve driven anything this crazy when on the track either.

Those that have been following Dodge’s SRT division as of late will know that they’ve been up to some pretty bonkers you-know-what over the last half decade or so. The Scat Packs, Demons, TRXes, 392s and yes, the Hellcats they’ve been building have become the standard in the car world – well, the domestic car world, anyway – when it comes to how far you can push “showroom spec”, to the point where the SRT folks seem to genuinely not care about what anyone thinks. They’re going to push the ultra-powerful internal combustion engine to the brink for as long as they can, and nothing short of government regulation – which is coming, make no bones about it – can stop them.

Heck, one look at how they literally bragged about being banned by the National Hot Rod Association (NHRA) when they released the Challenger Demon back in 2018 shows that even on-paper regulation may not do the trick. The division and its products stand as one giant, supercharged V8-powered middle finger to the motoring establishment.

And boy oh boy, this Charger is a wild ride if ever there was one. A 797-hp, 707-lb-ft wild ride that is more powerful than the Mercedes-Benz AMG E63 S, the BMW M5 CS, Chevrolet Corvette and three Honda Civic Sis. There is no more powerful sedan for sale today, anywhere. This thing is like rocket-powered roller skates or the Concorde; it is ultra. 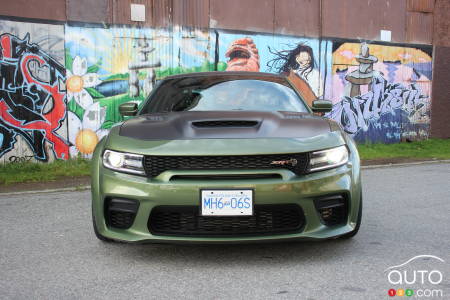 The looks pretty much speak for themselves, but I’m going to speak for them anyway because how can what we have here be real? The swollen fenders (the widebody adds 3.3 inches to the overall width, and it’s the only way to get the Redeye), fat 305-section tires wrapped around black 20s that themselves shroud red brake calipers, snarling hood intake and two-tone paint job (the latter a $1,395 option) do very little to hide the fact that this is not your rental car-spec Charger. You don’t even need the Hellcat badges (with red eyes – geddit?) to know that there’s a lot more going on here than meets the eye.

And yet, in this colour combo, the Redeye pulls a neat trick of kind of hiding in plain sight, like a stealth bomber. But then you lock eyes with its headlights and even though the engine’s off, you get the sense that somehow, it could wake up any second on its own accord – like Christine – and start some trouble. This finish is also called “F8 Green”, in a direct allusion to the 8th entry of The Fast and Furious movie franchise. And it’s great, although personally I think I’d rather go for a brighter colourway such as “Go Mango” or “Torred”. Go big or go home, right?

That hood bulge is not there just for show. Pop the top and you’ll see that the 6.4L Hemi V8 needs every inch of under-hood space Dodge can provide, to the point where they had to move the battery to the trunk in order to fit everything in there. The air intake is huge, the block is huge and the screw-type supercharger is huge. How huge? Well, it measures 2.7 litres, meaning that supercharger is bigger than the engine in the new Honda Civic Si.

You’re probably thinking you’ll get an earful from it when you really get on it, and that’s true. But you’d only be partially right: that supercharger whine is present pretty much the whole time, and while that kills this car’s NVH credentials, that probably doesn’t matter all that much to someone looking for a car like this. 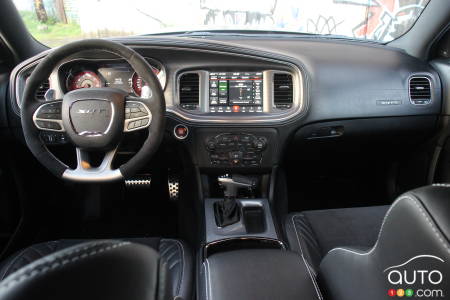 As wild as the outside is, the interior is actually much more subdued. It’s very monochromatic – some might call it “tuxedo-like” – and there’s precious little to separate it from other SRT Chargers. The seats are the same (which means they’re large and thickly padded), the steering wheel and shift paddles are the same (which means the latter are awkward to use) and the Uconnect display features all the same special performance data.

It’s like the opposite of the wolf in sheep’s clothing, this car. Of course, there are brighter interior colours available if you want a more-wolf like environment inside.

Be forewarned, while the front seat is a big, roomy place to be, the back seat is pretty snug for such a large car, especially in terms of headroom. Legroom’s OK so taller passengers can slide a little forward in the seat – the cushion is large – to free up some space up there, but compared to a Toyota Camry, Honda Accord or Genesis G80, it’s not even close.

Not that that really matters in this particular case, though, because any brushes with the headliner your rear seat occupants might have will be quickly forgotten once you show them, oh, I dunno, launch control for the first time. It’s activated fairly easily through the Uconnect system – Dodge/SRT doesn’t want the computers getting in the way, you see – and once activated, it’s simply a matter of holding the brake with your left, flooring it and letting go once you’ve hit the pre-selected revs. 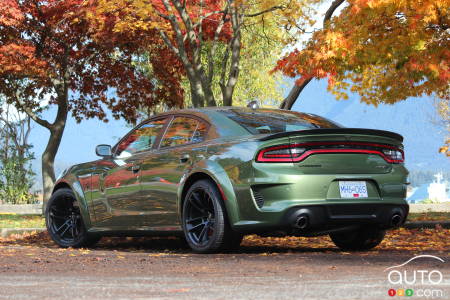 After that, the Pirelli P Zeros barely hang on as you tear down the road, supercharger banshee screaming its way up through the revs on tip in, underscored by a bloody great bellow from the massive dual exhaust. Indeed, even in 500-hp mode (selected via the computer, or if you start the car with the black key fob instead of the red one on your person) on a mildly slick surface, you will get that tail stepping out of line with 1/4 or maybe 1/3 throttle. There’s only so much the rubber can do to contain all that power and heft.

Once you’re ready for it, though, the potential for big lairy drifts is so present that you must constantly remind yourself you’re on a public road and no, you don’t need to enter the intersection at 45 degrees whenever the light goes green, no matter how willing a dance partner the Redeye is.

Not that the mods are all powertrain-based; you also get sport tuned suspension with adaptive dampers, for example. But don’t kid yourself: this is not a handling all-star, this Redeye. In fact, on high-traffic roads with their truck ruts, I found myself getting into more than a few tramlining situations that required immediate attention. That fat wheel will writhe around in your hands if you’re not careful. It’s almost as if they’ve stiffened things up too much in order to help the chassis keep up with the powertrain. It remains a handful, nevertheless. 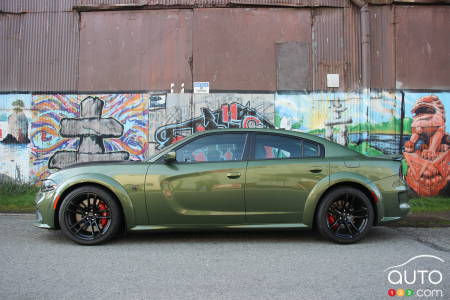 Which, I suppose, is where things go a little sideways – not in the cool drift way, but more in the askew way – for me and the Hellcat Redeye.

It is the most insane Charger you can get, and it takes everything to 11. Thing is, it’s very hardcore on the road and while you can fit a roll cage, get a crash helmet and have yourself a dragster (there’s even a cooling system for the supercharger, meant for use between quarter-mile runs), that does not necessarily a good daily driver make. You won’t get that mental power from the other Chargers, but models like the 392 Scat Pack still pass the eye test, but are easier on the body and wallet (there’s a $50 grand difference between the base price of the 392 and the Hellcat).

The Hellcat Redeye is a special car that comes specially priced, and it will find plenty of suitors. But those folks will be wise to already have something more usable in the paddock in addition to a halo vehicle like this. 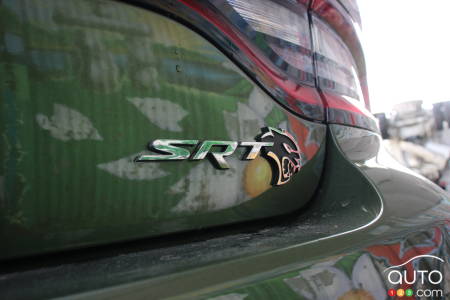 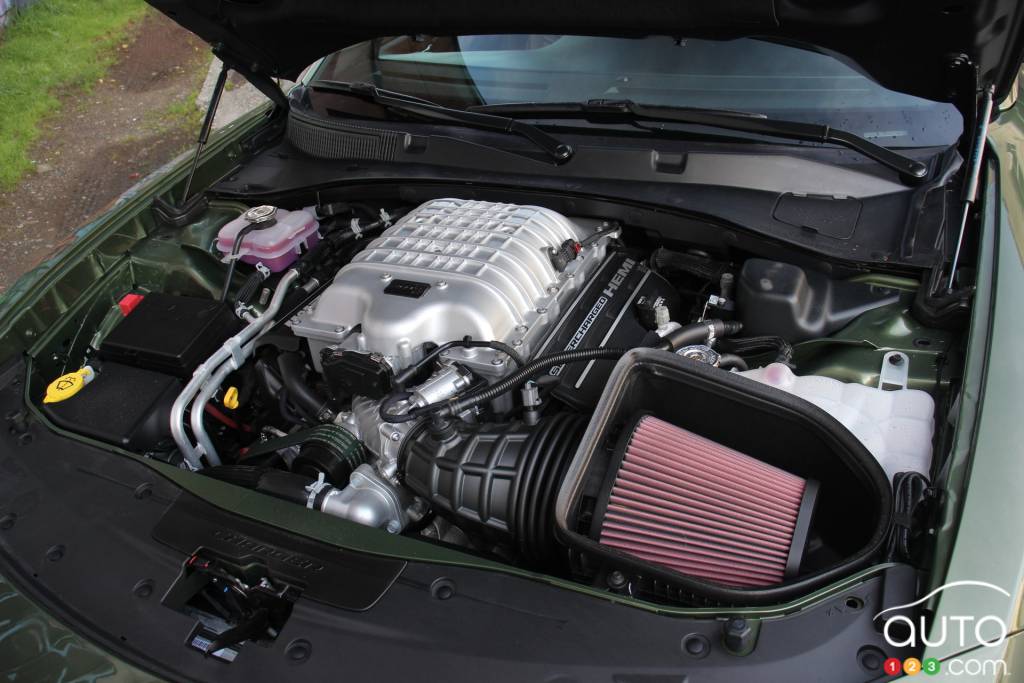 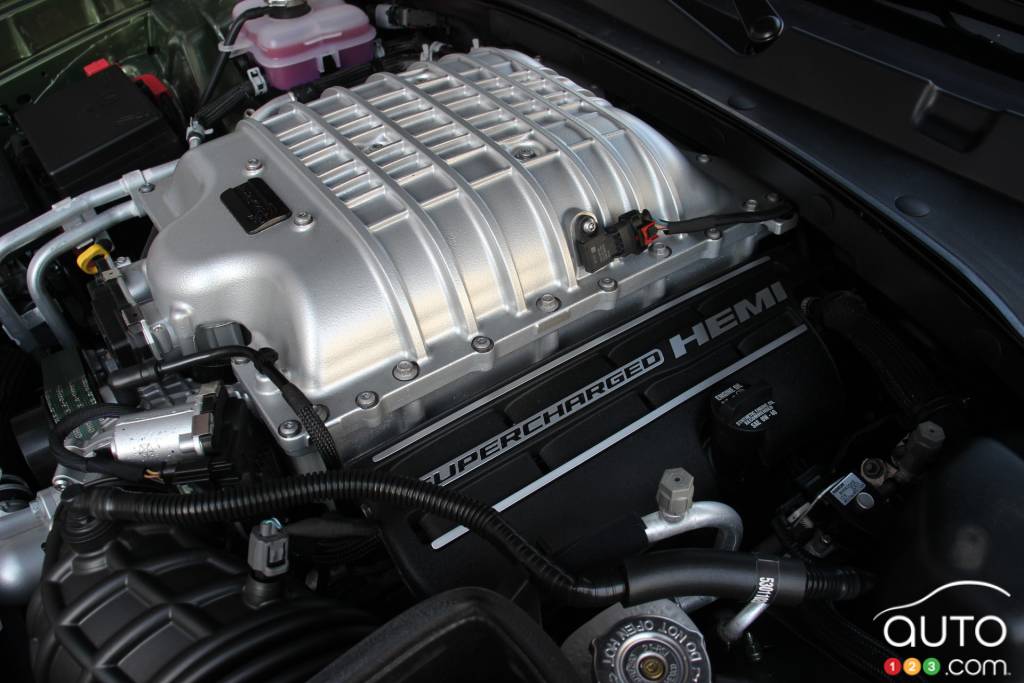 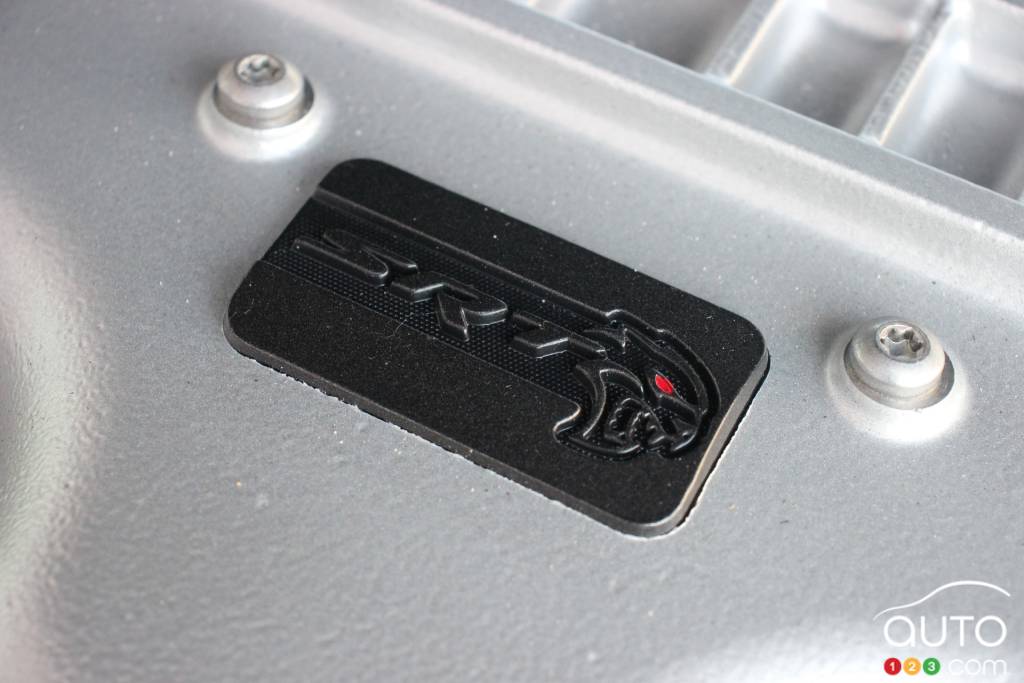 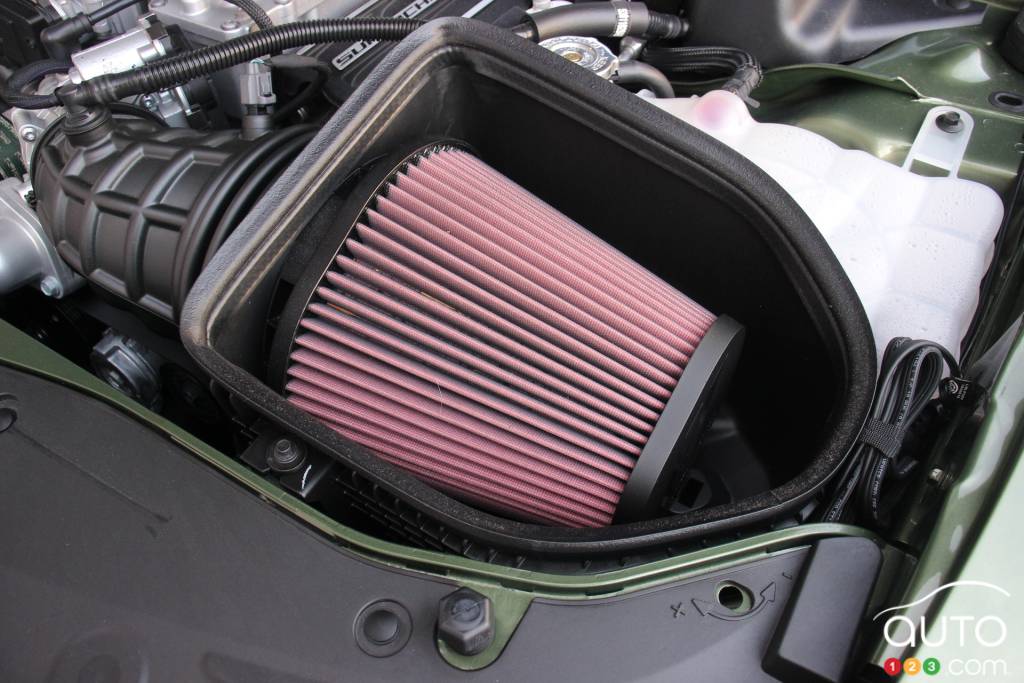