The last few years, you all certainly know by now, have seen automakers largely abandon car segments. Ford of course led the way, axing all but one of its cars, but GM, Toyota, Chrysler, Buick and Honda, to name just those, have all left one or more sedan/coupe categories.

Yet there are those hanging on, even doubling down on their commitment to the genre. Like Nissan, the current portfolio of which includes its share of sedans. In a nutshell, the company is hoping to benefit from the relative lack of competition in these segments. The calculation is intriguing and understandable, I’d say even brilliant and bold. If this were a poker game, I’d call Nissan’s strategy ‘all in”.

That’s great, but when you push all your chips to the centre of the table, eventually you have to show your hand. Are you going to lay down four aces or have you been bluffing with a pair of sevens? That’s what we’re wanting to see in regards to the Nissan Versa. 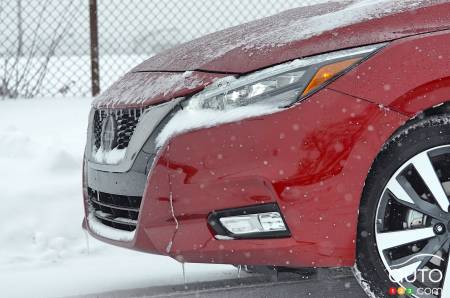 A comeback of sorts
The first Versa appeared for the 2007 model-year, and it actually caused a sensation at the time, greatly raising the level of luxury in the sub-compact segment. It even overshadowed the Sentra, which had been renewed but poorly at the same time. In 2011, Nissan redesigned the Sentra, bringing it back to a simpler format. The sedan didn't last long here in Canada, but the hatchback variant, the Versa Note, made a humble niche for itself on the market.

Which wasn’t enough, evidently, as Nissan chose to pull the plug on it for our market at the end of 2019.

The sedan version of the Versa continued on in the U.S. market, however – not that surprising given the stronger preference by Americans for sedans over hatchbacks. In 2019, the Versa four-door was completely redesigned, but though we could admire it American auto show, that was as close as Canadians got to it.

But then, you know what they say: Only fools and dead men never change their minds. 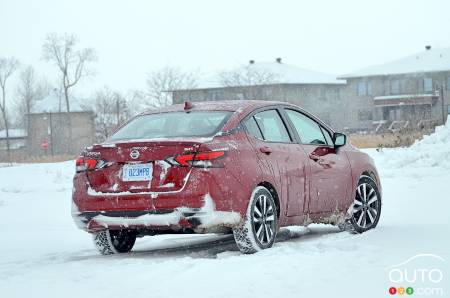 A Nissan kind of style
The 2021 Versa cuts a pretty attractive figure, much more so than the older-generation model in any case. That it’s wider, longer and lies closer to the ground has much to do with that. On the other hand, let’s not get too excited, because frankly the Versa looks kind of like a Sentra shrunk in the dryer. No matter, we’re guessing they were designed at the same time. From the looks of them, we’d say the design suits Sentra better.

The 2021 Nissan Versa comes in three different iterations - S, SV and SR. The S base model is offered with either a 5-speed manual transmission or a continuously variable transmission (CVT); the latter is your only option if you go for the SV or SR. the only one that comes with the last two.

The offer
The S version gets a sticker price of $16,498, or $17,998 with the CVT. While those are certainly attractive numbers, what you get for that is a little on the thin side. The equipment list does include certain welcome items like automatic headlights, push-button start, hill start assist, cruise control, fog lights, Bluetooth telephony and Google's Siri Eyes Free assistant.

However, you’ll search in vain for heated seats and, less forgivably, the Apple CarPlay and Android Auto applications. Also, if you want the practicality of a 60/40 split rear seat, you’ll need to get a CVT-equipped Versa, not one with a manual gearbox. Honestly, can someone explain that one to me? Is it a question of cost? If that’s Nissan’s reason, count me skeptical! 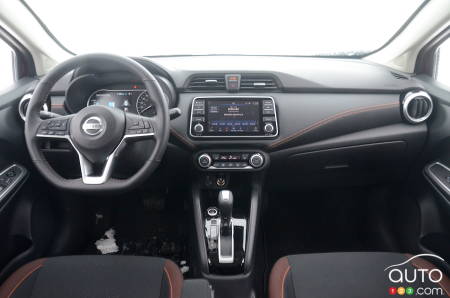 Switching to the SV model, you get more of what you want, namely those Apple and Android apps via NissanConnect plus heated front seats, plus an armrest grafted to the driver's seat, rear door warning, automatic climate control and driver attention alert system, as well as 16-inch aluminum alloy wheels. Price for the SV is $19,498.

Now from that info, tell me this: In your opinion, does Nissan want to sell base versions? Hmm...

And if you want more, you can opt for an SR version at $20,998. It adds a remote starter, Nissan's Intelligent Key, a 6-speaker audio system (instead of 4), 17-inch aluminum-alloy wheels, leather-wrapped steering wheel and gear selector and rear spoiler, as well slightly more upscale materials for the interior.

There was another irritant lurking in the product range, in my view. Nissan offers its Safety Shield 360 safety suite with the Versa. Only, with the base version, four of the six features of that suite are present. Starting with the SV trim, you get all six. Basic safety should not, if at all possible, be a function of money. 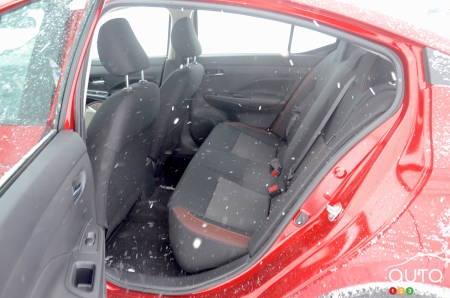 The driving experience
And what of the experience on the road? Well, as long as you’re realistic in your expectations, you’ll be fine. Because the Versa is precisely as you’d expect: not exciting, but not mediocre. The Versa’s job is not provide deliver thrills, but to get you where you want to go. It does that very well and in pretty good comfort, thanks to Nissan's zero-gravity seats, which provide great fit and really do help keep the body from getting too tired.

The soundproofing remains iffy, however, especially when it comes to keeping out noises coming from underneath the car.

Accelerations are ok but no more. Which only an inveterate optimist would be surprised to learn, because the Versa runs on a 1.6L, 4-cylinder engine delivering 122 hp and 114 lb-ft-feet of torque. Asking too much of it verges on downright cruelty. In the middle of a snowstorm, as was the case during our test drive, it tends to spin rather easily up front, but it handles well. And a handbrake is present (a rarity these days), which not only allows you to have a little fun if you want, but can also correct the trajectory from time to time. 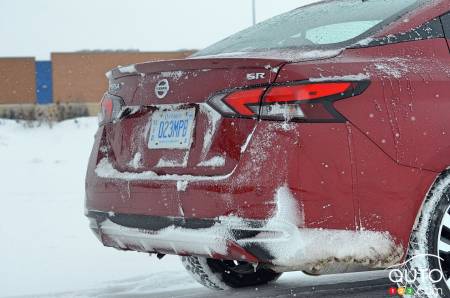 As for the CVT, it does decent work thanks to the simulated shifts. Note that the manual available with the base model has only five gears, which in 2021 is questionable. It’s one thing to make do with such an outdated component in the $10,000 Micra, but for a 2021 model priced at over $16,000, not so much. In 2012, the Kia Rio, for example, was available with a 6-speed manual transmission. And this of course brings us back to our conclusion on Nissan's sales intentions, which are to kindly and subtly nudge you towards the SV variant, or even the SR. 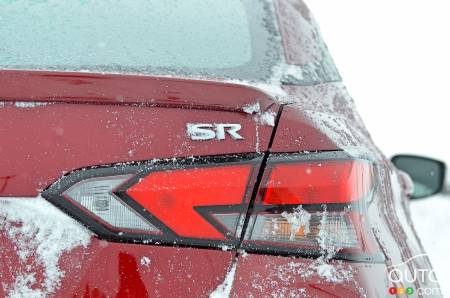 The strategy
Thirteen months ago, when the revised Nissan Sentra launched, the automaker offered a basic version without heated seats and without Apple CarPlay and Android Auto, as well as an SR variant without a manual transmission. Faced with criticism and objections, Nissan adjusted the offer by offering these elements, to its credit.

Might we see the same thing with this Versa? No, answered Claudianne Godin, Marketing and Public Relations Manager for Quebec, who elaborated on that succinct answer by explaining that “because the Versa is our entry-level car in the subcompact category, we had to balance the feature offering between the S and SV models. And since we wanted to have an attractive starting price on the S model, we put certain features such as Apple Carplay, Android Auto and heated seats on the SV model, in order to be able to offer this attractive price.”

And as for the manual transmission on the SR version, she added that “our research shows that the typical Versa buyer is more rational and looks for convenience. That's why we think they'll be more attracted to the CVT transmission.”

Two cars, two realities. But the fact is the initial offering of both models, this year's Versa and last year's Sentra, raised questions. 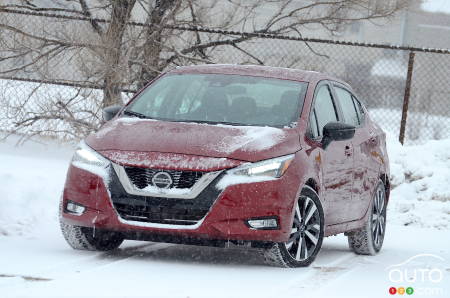 Conclusion
So, is this Versa a success? Yes. But will it be enough? The Kicks sell for about $3,000 more, but offers additional versatility. The bet Nissan is placing is risky, because the Versa is a bit thinly equipped, especially in base configuration.

At the same time, it’s a calculated move, with the company betting on a great price point... and the lack of competition. In fact, to return to our poker analogy, Nissan is placing its chips on the table with a pair of sevens in its hand.

It could work, or it might not. Consumers will be the ones to decide. 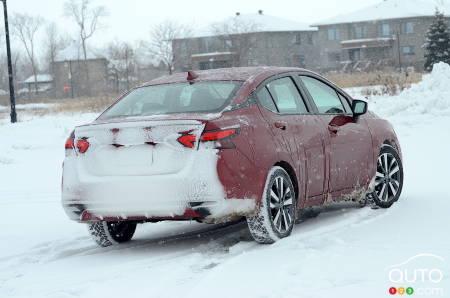 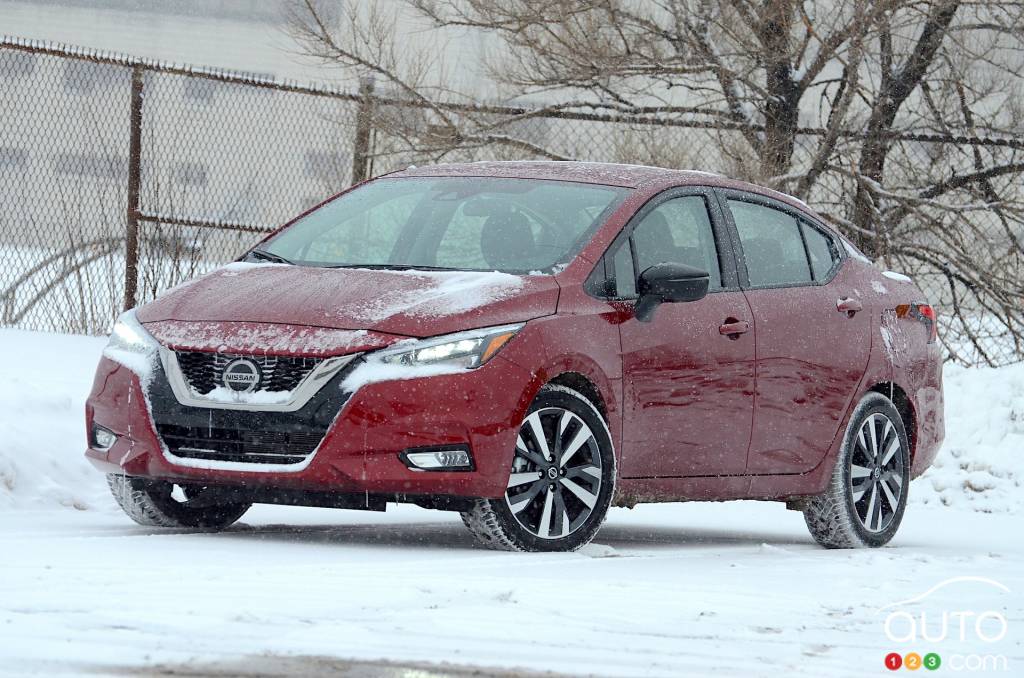 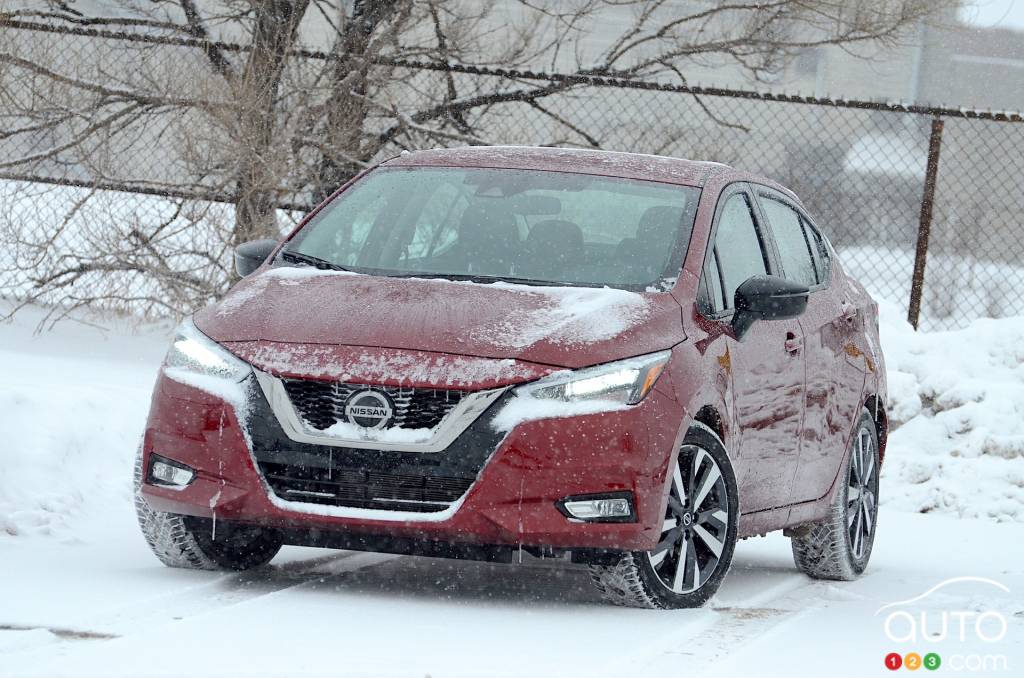 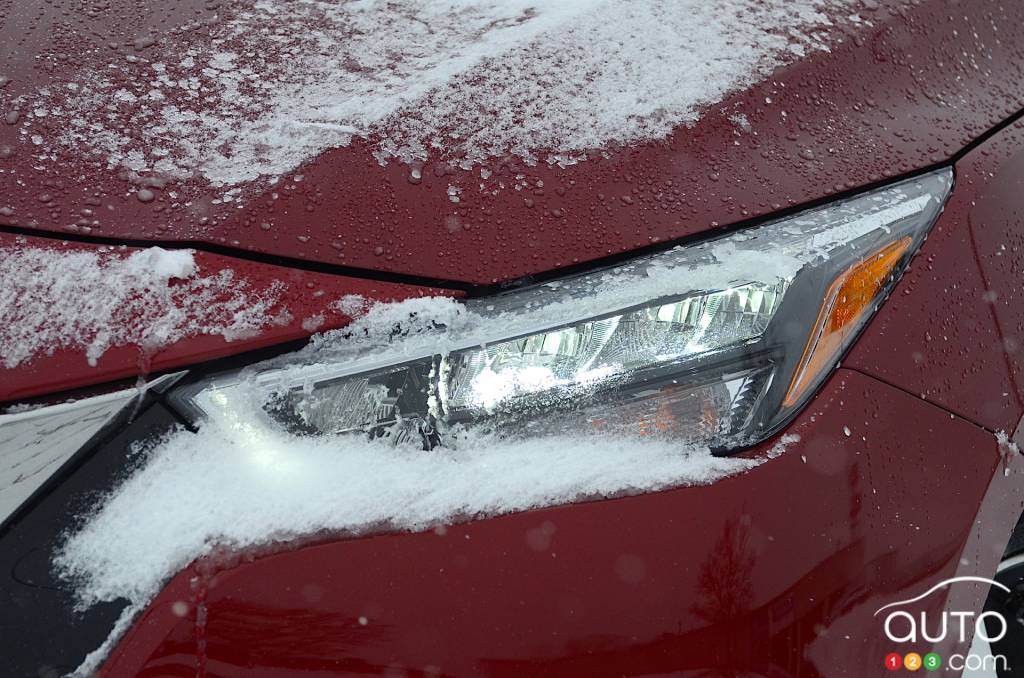 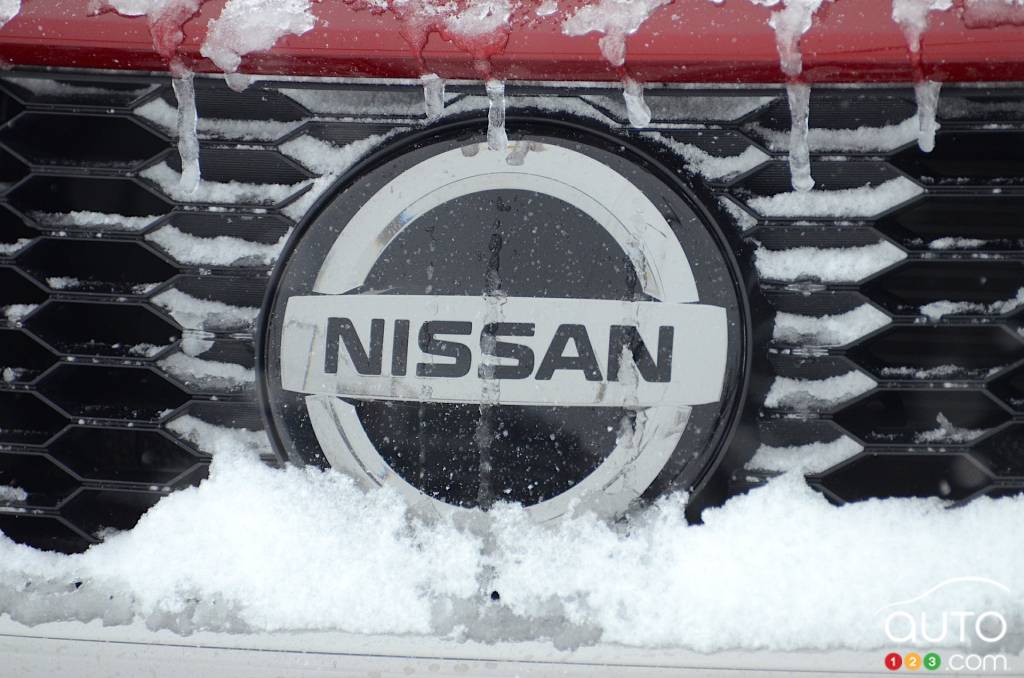 Here’s what you need to know about the 2021 Nissan Versa and its specifications and capabilities. That includes details about what’s new, the model range, th...

We now know the pricing and trim details for Canada for the 2021 Nissan Versa 2021. The remodeled sub-compact sedan gets a starting price of $16,498, which g...