Oro Station, ON – The Subaru WRX and STi models are synonymous with the World Rally Championship. This is where Subaru made its name and forged its image as a rebellious maker of rebellious sports cars. But the model has been frozen in time since 2015, and Subaru withdrew from the rally world in 2017. It was a hobby that had simply become too expensive for the “small” Japanese automaker. However, the WRX and STi duo remained on the Subaru roster, and their character forged from motor racing is still very much alive.

A unique event
To demonstrate the uniqueness of this duo, Subaru invited us to Oro Station, in Ontario, to the site of a future circuit that will be 4.2 km long (the same distance as the Gilles Villeneuve circuit in Montreal). The Oro Station Motor Circuit is still under construction and is not yet paved, which gave Subaru the opportunity to improvise a rally-race stage on dirt to show just what the WRX and STi are made of.

The current generation ends after 2021
The Japanese company has already announced that a new model will arrive in 2022. At the time of writing, we have little information, but we expect the engine will probably be a 4-cylinder 2.4L turbo that could, according to the latest information out there, deliver up to 400 hp in the next STi.

In the 2021 editions, the engine is the same as before, so you have a 268-hp turbocharged 4-cylinder, attached to a manual gearbox. Now, Subaru has never had the knack of producing smooth manual transmissions like BMW or Porsche, but theirs are still preferable to the optional CVT available with the WRX.

Overall, the STi is the rougher sibling and it can be a bit extreme for everyday driving, but the 310 hp of its 2.5L engine gives the model some real grit. With the STi, the manual transmission remains the only one available.

Playing in the dirt
After a slalom exercise in the WRX and some tricks in the dirt at the wheel of the STi, we took to a short 1.25 km dirt track to see what the cars can do in a rally context.

The idea of the exercise was simple: throw the cars headlong into the fray. Any who may still have doubted the solidity of this sedan's chassis had their doubts erased. Between 2nd and 3rd gears, with undulations worthy of a wheat field, we pushed the cars to the limit for a half-dozen or so laps, filling all nooks and crannies of the car with dirt, and still the car was asking for more. A fun way to prove the Subaru’s chops.

Less comfortable in everyday life
Of course, we know that out in the real world, no one is going to test their WRX and STi in such conditions unless they’re participating in the Canadian rally championships. So we also drove it on the road, where everyone else goes. In that context, while the power is still there, refinement is more of an afterthought. Accelerations shake every bone in your body and there’s a lot of jerkiness. That will be familiar to anyone who’s driven in rallies, but it’s not an asset for a touring car. The manual gearbox is out of sync and every gear you shift throws you forward, and you have to hold on to the steering wheel to stay on the trajectory you want.

Once you get past the little earthquakes of running up through the gears, however, driving at cruising speeds is much calmer. But if you're going to use this Subaru as your everyday car, know that the WRX is much more civilized than the STi, which remains stiff with a dry suspension even at highway speeds. 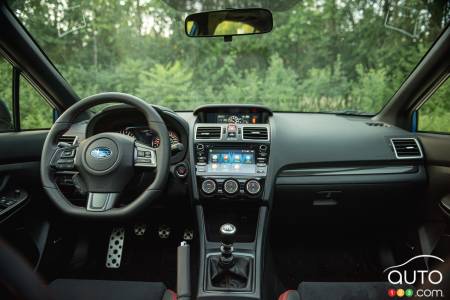 A livable interior
For a sport sedan, the WRX offers a spacious cabin in which four adults can benefit from the space they need. Visibility is excellent, with slim roof pillars and large windows as well as a large windshield that gives the driver a generous field of vision. The seats are comfortable and the driving position is upright as we like it. The sporty driving position is accentuated by the presence of Recaro seats in the STi version.

The touchscreen is small (remember, it dates to 2015), but it’s well-designed and easy to use. Like all Subaru models, the audio system sounds like it's straight out of an old Radio Shack stockroom. There's no navigation system, though nowadays with Apple Carplay and Android Auto you can just plug in your phone and the problem is solved.

If you have a manual transmission, you don't have access to Subaru's suite of safety features, which include adaptive cruise control, forward collision mitigation and lane departure warning. But then, is this really useful/wanted in a sports car like this?

Otherwise, the interior is well laid out, with properly positioned controls.

Conclusion
No other sports car has quite this ability to go out and get beat up on a rally course and then return to the asphalt intact. The WRX and STi are very solid and fun to drive. Subaru will just have to work on the level of refinement for the next generation. The car shows its age, especially inside. It's also relatively noisy on the road. Its lack of refinement, dearth of on-board technology, bumpy ride, slow throttle response in the city and fairly high cost of entry make it a less-attractive purchase.

Of the two, the WRX is still the best choice for now. But we suggest you wait until next year for the next generation, which might show some big forward strides. 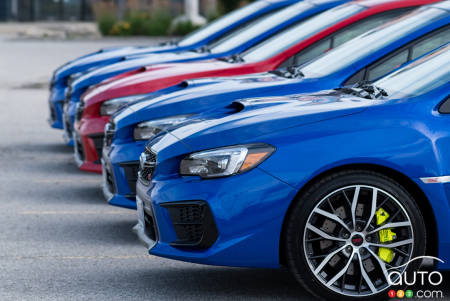 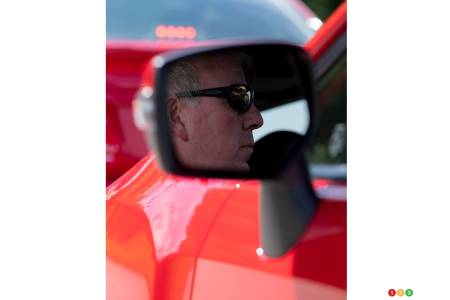 Photo: Subaru
The author, at work in the 2021 Subaru WRX 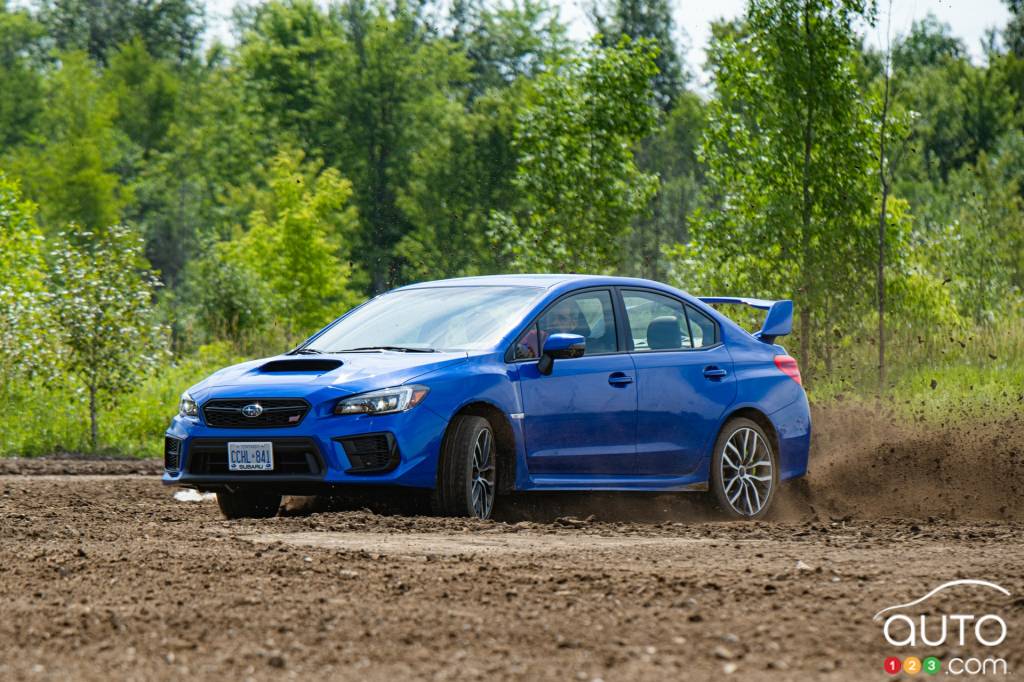 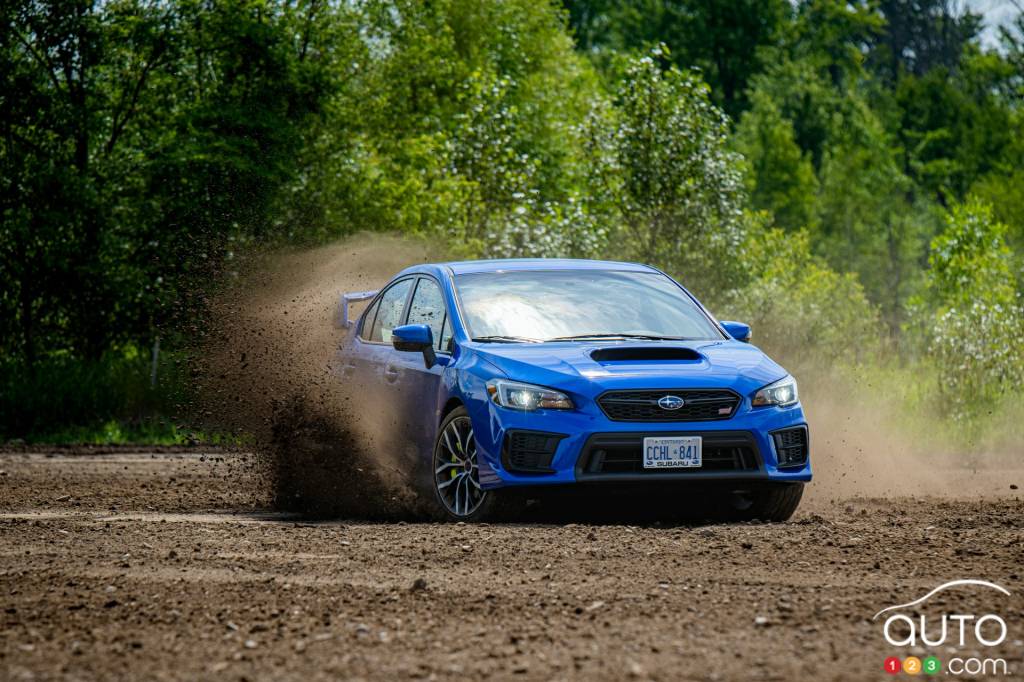 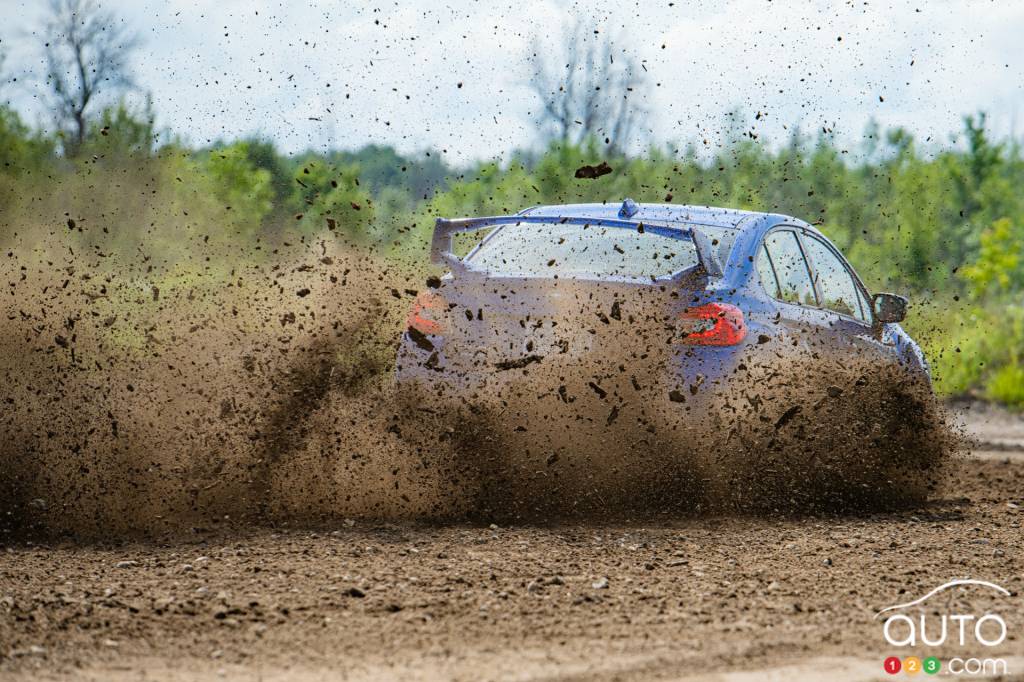 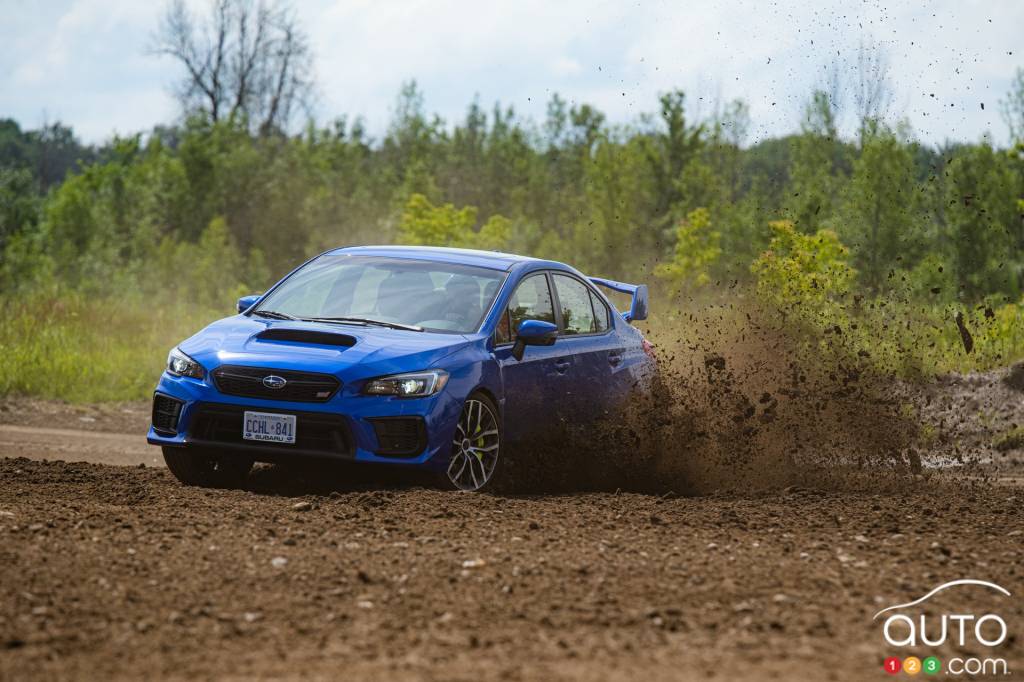 Next Subaru WRX and STI Expected in Late 2020

Subaru is working on the next editions of the WRX and STI models and should have them ready in the latter part of 2020. The two sporty models will likely get...