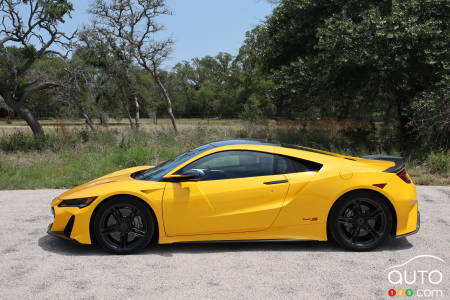 For 2022, the Acura NSX has been given its place in the world of Type S, that performance nameplate over at Acura that has already graced the likes of the MDX crossover and the TLX sedan. Indeed, it may seem strange that the NSX, the most performance-oriented model in Acura’s lineup, has had to wait its turn to get the Type S treatment, but when you consider just what all that entails for Acura’s supercar, you start to understand that indeed, this is a great example of how good things come to those who wait.

The power of S
First of all, the transition to S spec has done wonders for the styling of the NSX. What used to be a car that looked stuck between a McLaren and an Audi R8 has been transformed into something more bespoke thanks to tweaked headlights, front splitter, new wheels and, perhaps most notable of all, a massive rear diffuser similar to what you might see on the NSX GT3 race car. Add the Indy Yellow Pearl paint seen here with contrasting black badging, and you have one heck of a head-turning hybrid supercar. 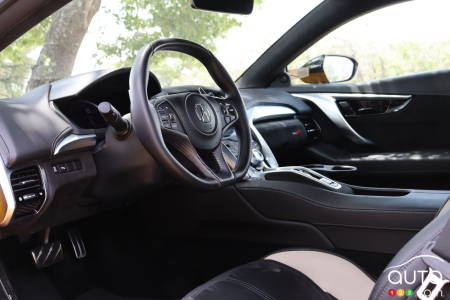 Look inside, and further details emerge. There’s more use of Alcantara suede (the entire headliner and a-pillars are covered in this more race car-like material) as well as NSX logos on the seatbacks. Under the rear hood, there’s also an all-new engine finished in red that looks a lot like The Predator before it bears its fangs.

Added to which, the NSX’s interior is a surprisingly roomy place to sit considering its looks. You shouldn’t have as much headroom, as much legroom and as much elbow room as you do, but the reality is taking a seat in the Type S takes little of the wriggling adjustments required upon entering low-slung sports cars and super sports cars not named Porsche 911.

Even with all that literal elbow room, the driving position is ensconcing enough, and the chunky steering wheel (trimmed here in carbon fibre thanks to my tester’s Lightweight package that shaves 58 lb of weight) well-placed enough, that you get the leverage required to saw through mountain roads and racetrack curves alike. There’s no shift lever to speak of – a pair of paddles and a button bank perform the combined duty of a traditional lever – but just as the cabin geometry is well orchestrated, the paddles are well-shaped so they’re easily reached by outstretched digits. 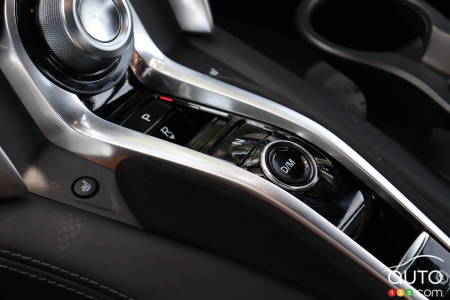 Speaking of the transmission buttons, many out there have bemoaned them, both here and on other Acura products, but I don’t take as much issue. Indeed, I’ve experienced systems like these from other manufacturers that are less responsive than I’d like, but I didn’t find that to be the case here. Hit the D button and you’re good to go; a switch to reverse follows suit, meaning three-point turns aren’t the laggy affair they can sometimes be.

Behind the wheel sits a fully digitized gauge cluster that isn’t quite as modern-looking as some of the competition, but the fonts are easily legible and the way the needle sweeps ‘round the tach is a nice and quick.

What I can’t so easily forgive is the infotainment system. Unlike the all-new Integra – or even the RDX and MDX SUVs – the NSX makes do with the older system that feels lifted directly from an older Honda. That means no volume adjustment knob, a small display with left-side touch panel filled with tiny buttons and retro graphics. Seems there’s no rule that says a $220,000-plus supercar needs to have the latest and greatest in terms of in-car entertainment… 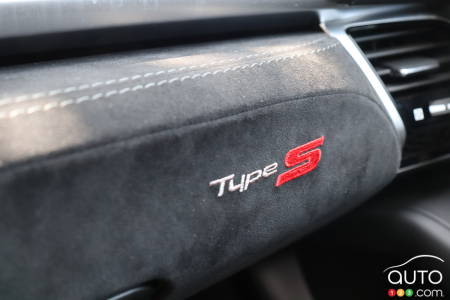 Acura will end production of the NSX after 2022. For its last lap, the NSX gets a limited Type S variant, and only that. Production will be limited to 350 un...

Acura has introduced the 2022 NSX Type S at Monterey Car Week in California, The automaker confirmed previously that this high-performance variant is its way...