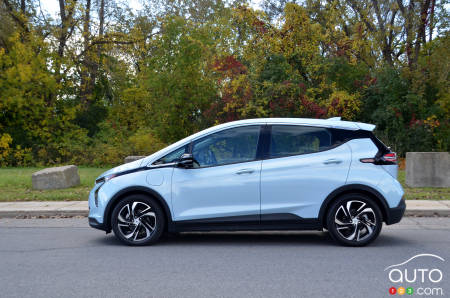 •    The new generation of the small electric Bolt had a very painful birth, to say the least.

•    Most notably, a massive recall campaign put the brakes on the electric car for several months.

The last time Chevy’s lovable electric city car visited my driveway, the novel coronavirus had just installed itself in the country. That was in March 2020, recall. It was a while ago.

More than a year later, in the fall of 2021, I had a new appointment, this time with the revised 2022 Bolt EV. Just days before that could happen, Chevrolet issued a massive recall affecting all Bolts built and sold since 2017. My test drive scheduled for the fall of 2021 would have to wait. And that wait would stretch a full year!

The large-scale and drawn-out recall campaign threw a massive monkey wrench into Chevrolet’s plans for a model it was just proudly introducing the new generation of. The company even reduced the entry price for its most affordable electric car.

There’s a silver lining in that, of course. With government rebates in place (provincial and federal), the Bolt EV suddenly became a much more attractive car for those on a budget. At least it would be, once it could be had again. Once it had finished stepping on all those banana peels.

Our newest, post banana-peels test drive of the 2022 Bolt EV took place in the fall with cooling temperatures. In the event, this was also the occasion for me to put to use my new at-home charging station, installed a few weeks earlier. House renovations had seemed to me the perfect occasion to have one of those beauties installed. For one thing, the number of EVs we drive as part of our work is increasing by the month; for another, it’s a chance to better experience the daily reality faced by EV owners. In any case, it's all well and good to have a public charging station 1 km from home, but it's far more practical to have one at home. 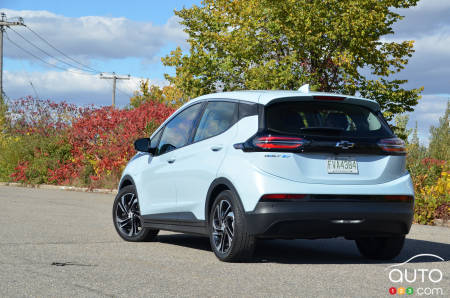 New design, same silhouette
On a personal note, I have no hesitation in saying that the new Bolt EV is more attractive with its intricately designed headlights and that massive panel in front of the bumper opening. Even the new running lights are nicer. As for that Ice Blue Metallic body colour, while it does force buyers to shell out an extra $495), it also catches the eye.

Overall, though, the revised Bolt EV retains its narrow, urban shape, which obviously isn’t for everyone. 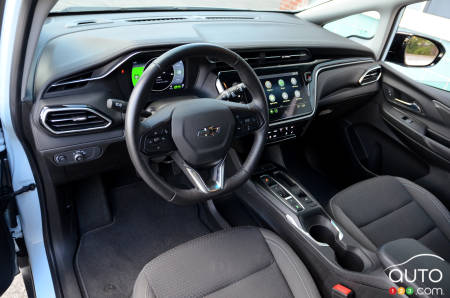 Slightly revised interior
The dashboard gets a new look with this mid-cycle redesign. The shape is similar, but the climate control buttons are now all placed in a row, like a piano keyboard. This new layout is more elegant, but it forces drivers to take their eyes off the road to choose the right control. Hopefully, over time owners will get used to the placement and order of the commands.

The central screen, though, is very easy to use on a daily basis. The menus are easy to find and the graphics are clear. Occasionally, the physical buttons on the left side of the screen can be confusing, but in general, the Bolt EV's infotainment system is simple - and that's a good thing!

The Chevrolet Bolt EV, despite its partial redesign, hasn't changed much. The body is taller than it is wide, so space is not the most generous on board. On the other hand, the roof height leaves plenty of headroom for taller passengers. Unsurprisingly, it's a bit tighter in the second row, although the flat floor doesn't penalize the person sitting in the middle of the seat.

While it's clear that the trunk is that of a compact car, it's worth mentioning that the removable floor reveals a surprisingly ample space in which to stash valuables.

Unfortunately, no matter how hard I looked, I couldn't find the promised added level of comfort on board the updated Bolt. The seats are too short and the seat and backrest are too hard. I should also mention that the car's suspension is a bit firm, which can make for a bit of bouncy car on rougher road surfaces.

Is the Bolt fun to drive?
Needless to say, the Bolt EV was not developed for the same purposes as the Corvette. The Bolt is an ideal car for the city with its slightly higher driving position, exemplary visibility and short turning circle. The very light steering is an advantage in city driving, but on the highway at higher speeds, the car isn't as reassuring because of the loose steering. Fortunately, the lower centre of gravity literally glues the car to the ground.

With 200 hp and 266 lb-ft of torque available, the Bolt isn't a turtle when it comes to acceleration, but it ain’t no drag strip champion either. Still, by turning off traction control, you can spin the front wheels with a little effort. Moreover, if you take a corner too quickly, the car will understeer. So you have to apply a little more pressure on the right pedal when the road twists. 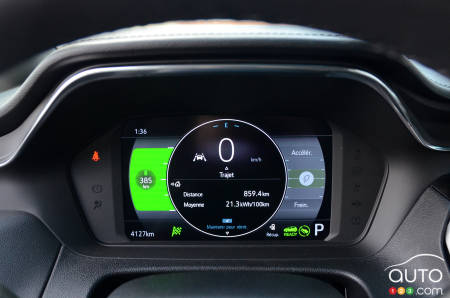 One-pedal driving is definitely possible, and the energy recovery lever on the left side of the steering wheel is another Bolt feature I like. The only problem is that the Bolt is no longer the most fun car in its class. But to be honest, it never was - and I bet Bolt owners don't care!

For those who do care, you’ll have to wait for the Chevrolet Equinox EV and Blazer EV, both of which will deliver more acceleration power.

417 km?
The mercury began to drop during my week's test drive, which robbed me of the Bolt EV's theoretical maximum range, which showed a possible 394 km after a night plugged into my new charging station. That's not as much as the 417 km promised by the manufacturer, but let's just say that nearly 400 km on one of the most affordable electric cars on the market is quite an achievement. 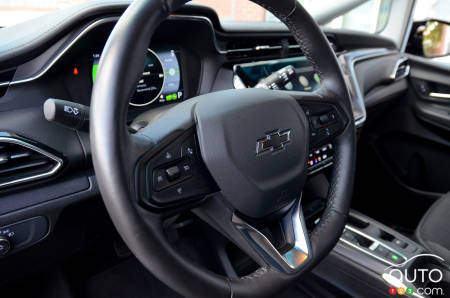 The final word
No matter what happens to the Bolt EV/Bolt EUV tandem in a few years, its place in General Motors' electric history is assured. It's true that the massive recall is certainly still fresh on many people’s minds, but the manufacturer has managed to replace the batteries on the vast majority of the Bolts on the road. In future, there will certainly be better and more sophisticated models built on the Ultium platform than the Bolt EV, but the small EV has contributed in its own way to the popular acceptance of the electric movement.

The Bolt EV isn't a perfect car, far from it, but with its current “reasonable” price tag, it's at least worth considering... if you're sold on the BEV format, that is.

The price (!)
The infotainment system
Super nimble in the city 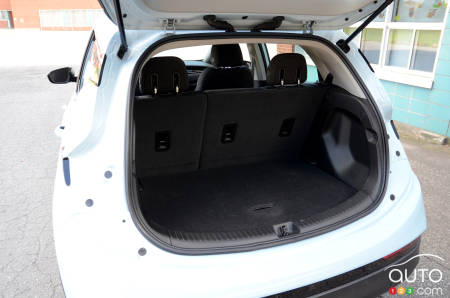 Chevrolet is putting production of its new 2022 Bolt on hold while it fixes a few problems. The most significant issue has to do with the LG-supplied batteri...