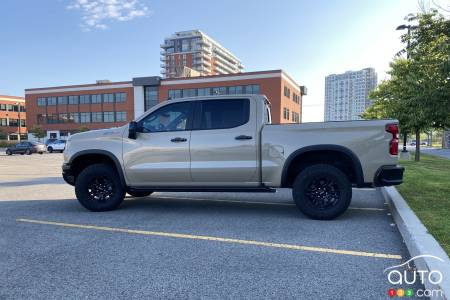 The current 2019 Chevrolet Silverado and GMC Sierra have seen mild updates this year.

We were able to drive the ZR2 version of the 2022 Silverado, the latest addition to the lineup.

As much as regular Silverados can blend into traffic, this ZR2 version is pretty unlikely to go unnoticed. With an aggressive gloss black grille, solid steel bumper, heavy-duty skid plates, bright red tow hooks, 33-inch tires and optional black tubular rocker panels, plus a slightly raised chassis, it's ready to climb over anything in its path.

You can see yourself going into the woods with this truck, aided by its raised seat and long-travel Multimac shocks that can handle any kind of surface, including absorbing any road imperfections. Dressed in a Dune Sable colour, the truck drew as many positive comments for its exterior finish as for its design during our week with it.

Another special feature of this version is the bumper, designed with removable end caps. This means that if you damage part of the bumper while driving off-road, you can change only part of it instead of the whole thing. The same goes for the dual exhaust system, which is housed just behind the rear bumper to reduce the risk of being crushed.

The other aspect that can be noticed or heard in this new version is the exhaust system. It might be hidden behind the rear bumper, but it’s hard to ignore. When the vehicle starts up, people know it. The sound is phenomenal, and tuned to allow the big 6.2L V8 to scream with a powerful roar that tells you – and everyone else within a two-block radius – that this is no ordinary Silverado.

In fact, having had to start it a few times late at night, I had some sympathy for my neighbours. 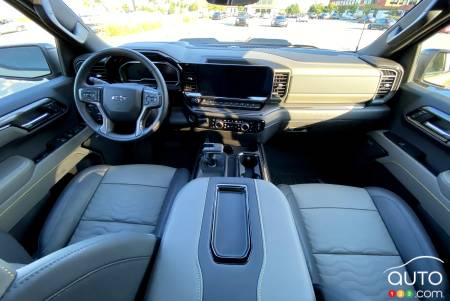 The interior
Other highlights of the new 2022 Chevrolet Silverado include the interior. The interior has been completely redesigned for the LT, RST, LT Trail Boss, LTZ and High Country versions. In particular, the horizontal dashboard allows for a larger cabin.

As for the gear selector, it’s not exactly typical of what we normally find in this type of truck. It looks borrowed from a Corvette or other sports car; the same goes for the center console.

The upper part of the dashboard is fine with its 13.4 inch touchscreen that’s very responsive and pleasant to use. Google is now fully integrated and offers assistance, navigation and Google Play. Apple CarPlay and Android Auto now connect wirelessly.

However, the centre section is sorely lacking in storage space. Poke around all you want, you’ll find too few of the storage spaces that are so useful in this type of vehicle.

In the back, fortunately, the storage spaces are more plentiful. There are spaces in the back of the rear seats, but also under the bench that can be raised. 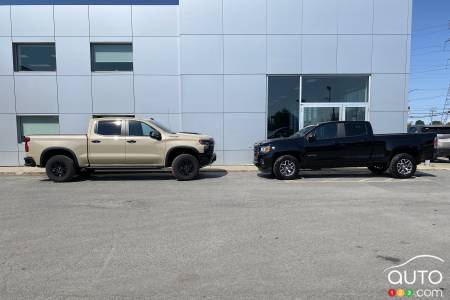 Again, the sound of this engine is absolutely unique. Fortunately, this truck is also a lot of fun to drive; that engine is responsive and offers great power. And if you keep things mellow, you'll also get reasonable fuel economy. We recorded a “mere” 15.0L/100 km during our test drive, and that was in mixed driving. 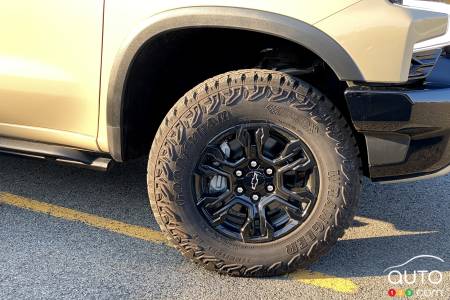 The final word
The ZR2 is meant to be an off-roader, but this variant of the Silverado is not as extreme as the Ford Raptor or the Ram 1500 TRX. That said, it's definitely more off-road oriented than the other Silverado versions, not to mention the F-150 Tremor and Ram 1500 Rebel.

Its major asset is the set of Multimatic DSSV shocks, considered among the best and most innovative on the market. These sophisticated shocks, combined with 33-inch tires, electrically locking front and rear differentials, 11.2 inches of ground clearance and a fairing designed for a steep approach angle, make this a very capable off-road machine. 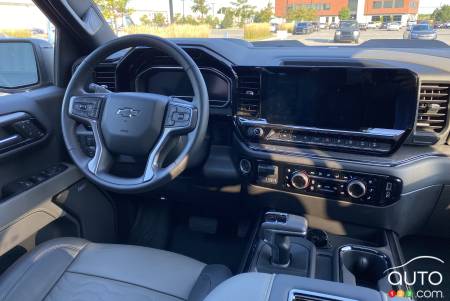 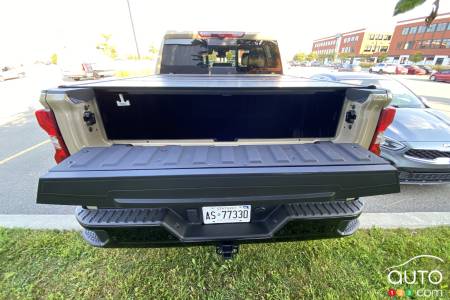 The 2022 Chevrolet Silverado High Country is, among other things, another one of those high -margin models there to help finance General Motors' transition t...

We trekked to Ontario north of Toronto to discover the new 2022 Chevrolet Silverado ZR2 on a rainy day recently. Here’s our first-drive review of an attracti...

Chevrolet has rolled out the new ZR2 version of its Silverado pickup yesterday. If the approach is as convincing as with Chevy’s Colorado model, it's promisi...