This summer, we give you a 6-part review of the all-new Wilderness variant of the 2022 Subaru Outback. Today, part three, in which we find ourselves, like Willie Nelson, on the road again.

Now that we’re through analyzing the exterior and interior of the 2022 Subaru Outback Wilderness at rest – accomplished of course with the help of Emiliano, my eagle-eyed soon-to-be-12-year-old neighbor, it's time to tell you about its handling whilst in motion.

Without Emiliano, alas. He’s enlisted in a day camp before the return to school.

A dfferent engine
Subaru has remained faithful to its defining concepts for ages. One of them is the flat engine.

You know the principle: instead of standing upright, the cylinders lie flat, one half facing the other. It's like cutting a V-shaped engine with a knife. Do that and the slices fall on either side and the pistons now move horizontally.

Other manufacturers have made use of the flat engine (VW for its Beetle, Citroen for its 2CV, Ferrari and Porsche too) at different times. But once the Japanese automaker introduced it in 1966 in its 1000 sedan, it liked what it got, notably a reduction in vibrations and a lowered centre of gravity that results in better grip on the road. It liked the results so much that it’s stuck with it ever since.

But if this type of engine is so good, why isn't it more common in the industry? Basically, it's because the design of the engine makes it harder for mechanics to repair and reduces the possibilities for adapting it to different vehicles. Manufacturers usually prefer inline engines that are easier to adapt to different models on the same platform. 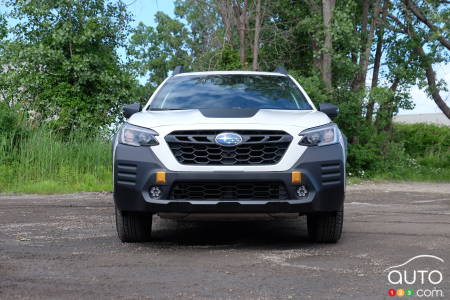 By the way, Subaru’s version of the so-called boxer engine is actually itself a type of flat engine, the difference being in the movement of the pistons. Fun fact: In 1996, Porsche launched the Boxster by combining the words boxer and roadster.

All this to say that the flat-4 in our Outback Wilderness has a displacement of 2.4 litres and the addition of a turbocharger gives it 260 hp and 277 lb-ft of torque between 2000 and 4800 RPM (like the two XT versions and like the 5- or 8-seat Ascent). In comparison, the variants below the Wilderness in the range make do with a 182-hp naturally aspirated 2.5L.

Acceleration from 0-100 km/h time take a bit less than 7 seconds, which means smooth highway entries and strong (though noisy) passing manoeuvres. Overall, there’s enough beef between the buns that you can hog the left lane without feeling like a fraud.

Under the hood, the sound is throaty, which is perfect for a vehicle designed for forest trails. Years ago, the sound of a Subaru reminded me of a farm tractor. With the Wilderness, it's more like the growl of a backpacker ready for a fight.

Auto123 puts the 2022 Subaru Outback Wilderness to the long-term test. Today, part 4, in which we decide to go out into the woods.

Auto123 puts the 2022 Subaru Outback Wilderness 2022 to the long-term test. Today, part 1: The origins and evolution of a wild idea that wasn’t so wild really.

Auto123 puts the 2022 Subaru Outback Wilderness to the long-term test. Today, part 6, as we give the wagon its report card.