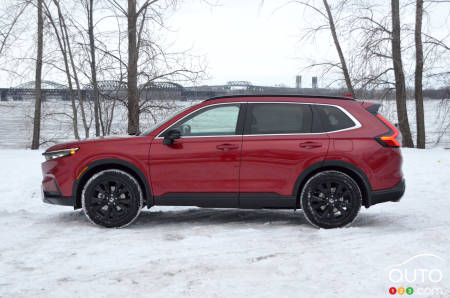 •    The CR-V Hybrid is the only CR-V variant to get the Touring badge.

•    The hybrid model is the only one to be equipped with 19-inch wheels.

Beyond the environmental concerns that compel some motorists to turn to electrified vehicles, there's a counterbalancing factor that should never be forgotten in the equation: cost.

And on that score, the new 2023 Honda CR-V Touring Hybrid isn't what you'd call the bargain of the century. With a base price of $48,890 before fees and applicable taxes, the new electrified version of the most popular SUV in Honda’s lineup costs closer to a luxury vehicle than to any its direct competitors.

At least that's what it looks like when you take the time to compare the prices of the most affordable versions of all the compact hybrid SUVs on the market. While the new 2023 CR-V Touring Hybrid is the most expensive, the Toyota RAV4 is the cheapest hybrid SUV on the market. In fact, the LE AWD livery of the RAV4 has an MSRP of $34,850.

In reality, the most expensive CR-V should be compared with models as well-equipped as this Touring trim, Touring versions being top-of-the-ladder trims at honda.

Still, I stand by my position regarding the asking price for the new Honda hybrid: it’s high, and frankly Honda shouldn't expect any massive stampede of buyers towards the SUV. 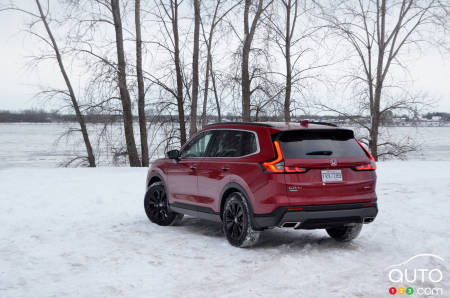 “Business as usual” on the outside... and on the inside
The first thing you notice when you look at the CR-V Hybrid is that it's identical to the lower trims, except of course for the blue HYBRID badge on the lower part of the tailgate and the TOURING label reserved for this electrified variant, which also happens to be more powerful than other CR-Vs.

The CR-V Touring Hybrid's wheels are painted black and 19 inches in diameter, the largest offered in the CR-V range (even the Sport model makes do with 18-inch wheels). The only other distinction this CR-V Touring Hybrid receives is a pair of silver “trapezoids” at the base of the front fascia. In other words, there’s little showing off by Honda of how green this model is. 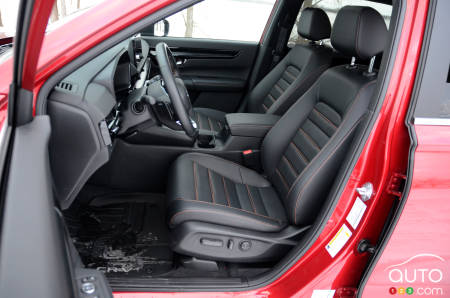 It’s the same inside the cabin. The hybrid technology doesn't change the layout of the controls or any of the other interior details. In fact, the only clue to the electrified powertrain is the letter "B" to the left of the gearshift, which you use to get more aggressive energy recovery when braking. There’s also a unique exclusive information gauge behind the steering wheel where you can see the energy flow.

The difference is under the hood
Where this CR-V Hybrid gets very different from its brethren is under the hood. The regular CR-V’s 1.5L turbocharged 4-cylinder engine is here replaced, like other hybrids on the market, by a powertrain based on an Atkinson-cycle gasoline engine.

Thus does the CR-V Hybrid rely on a 2.0L engine paired with a pair of electric motors. Honda in fact introduces its fourth-generation hybrid system with this model, which delivers 204 hp and 247 lb-ft of torque. 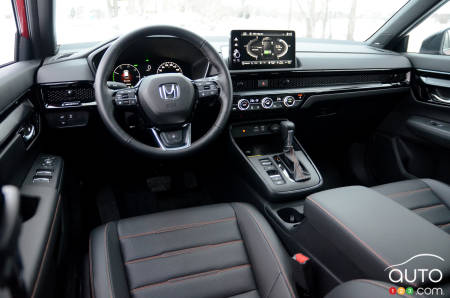 Honda did not abandon the mechanical connection between the two axles. Engineers chose to use the driveshaft instead of bolting one or two electric motors to the rear axle to ensure all-wheel drive.

Did Toyota's recent corrosion problems with its electrified RAV4 convince Honda's strategists to go with an older formula? Impossible to know for sure, but I would guess there's more behind the decision than just that. Don’t forget that that Honda will be moving to all-electric powertrains in the next few years.

On the road
I've already said my piece on the CR-V Hybrid's pricing, but what about its driving dynamics? Let's just say it's more appealing than the MSRP. While it's clear that Honda didn’t focus on delivering pure performance, acceleration doesn't seem to be a problem. The CR-V Hybrid is not as quick off the line as the RAV4 Hybrid, for example, but to state the obvious, raw speed and high performance are not high on the priorities of a family-hybrid SUV like this.

The light steering will appeal to drivers who spend a lot of time in the city, even if this lightness undermines the vehicle's handling on the highway. But to be fair, the CR-V Hybrid is an SUV that holds its own on any surface.

The comfort-calibrated suspension is firm enough to give the vehicle a healthy, if not particularly sporty, ride. As for the powertrain's somewhat limited output, do keep this in mind: you have to select the Sport driving mode to really feel the 204 horses. In fact, it's in the city that the CR-V does much better with its electric motors that give that little extra push when you start from a stop. 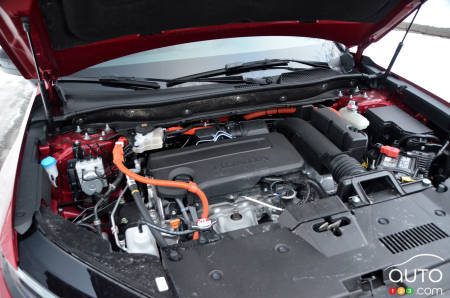 Of course, the CVT makes the combustion engine screech when you press harder on the throttle, but it's not too unpleasant. Honda's unit works relatively well.

And at the pump?
Here’s the litmus test for a hybrid SUV. And in this regard, the CR-V comes in… last in the category. Honda's official figures are 6.0L/100 km city and 6.9L/100 km highway, for an average of 6.4L/100 km. But to approach those kinds of numbers, you have to stick to Econ mode and be very gentle with the right pedal.

Those aren’t things most drivers will stick to all the time, so it's more realistic to expect around 8.5L/100 km - a noble result, but not quite in line with the manufacturer's predictions. In fact, the CR-V's electrified rivals are capable of doing better under similar conditions.

I should mention that a larger portion of my test was done on the highway at speeds not exceeding 120 km/h and that the outside temperature was wintery (-5°C on average), but not freezing. A little more city driving and the result would certainly have been lower. 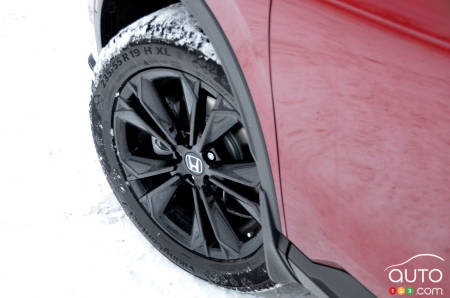 The final word
The Honda CR-V Hybrid is unlikely to eclipse the regular versions of the model, in fact it may remain a rare sight on our roads given the high asking price. At the risk of repeating myself, I wish Honda's strategists would reconsider and bring to market a version less heavy in equipment and amenities, but at a more reasonable price. The CR-V Hybrid is a quality SUV that gets gas mileage on a par with a compact car, but it just costs too much.

The PRICE!!!
The higher fuel consumption (than the competition)
The absence of cranks in the trunk to lower the rear seat

Some of your questions about the 2023 Honda CR-V Hybrid:

Is the new CR-V Hybrid assembled in Canada like other versions of the model?
Yes, at Honda's plant in Alliston, Ontario.

What are the power and torque figures for the 2023 CR-V Hybrid?
The powertrain is good for 204 horsepower and 247 lb-ft of torque.

Is there a purely electric mode on the CR-V Hybrid?
No, even though the vehicle often runs without the contribution of the combustion engine. But there is no button dedicated to this mode. 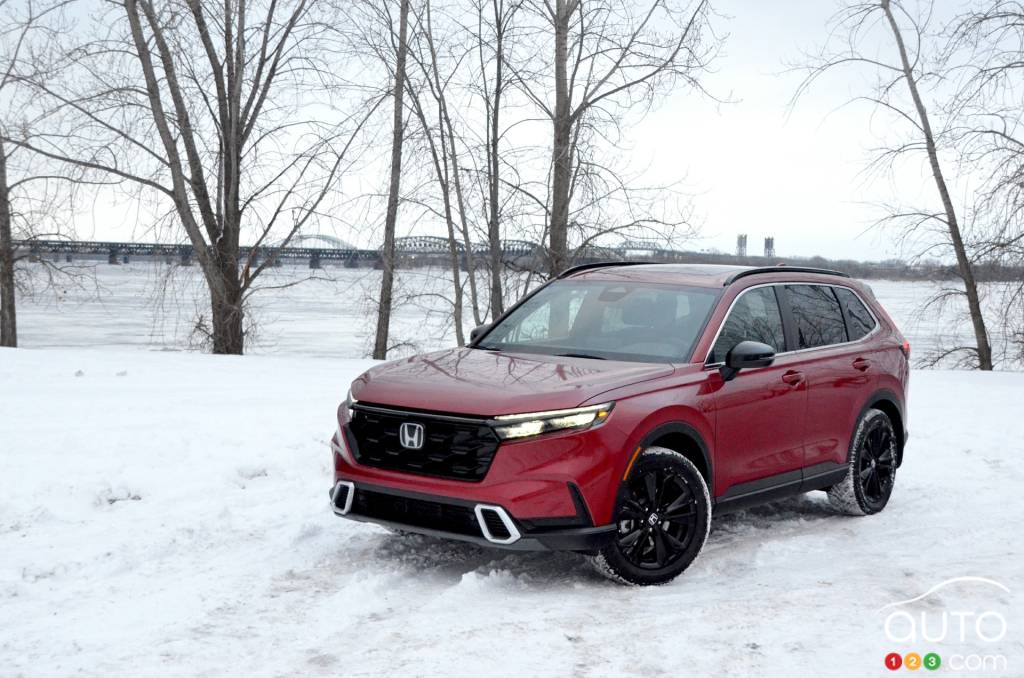 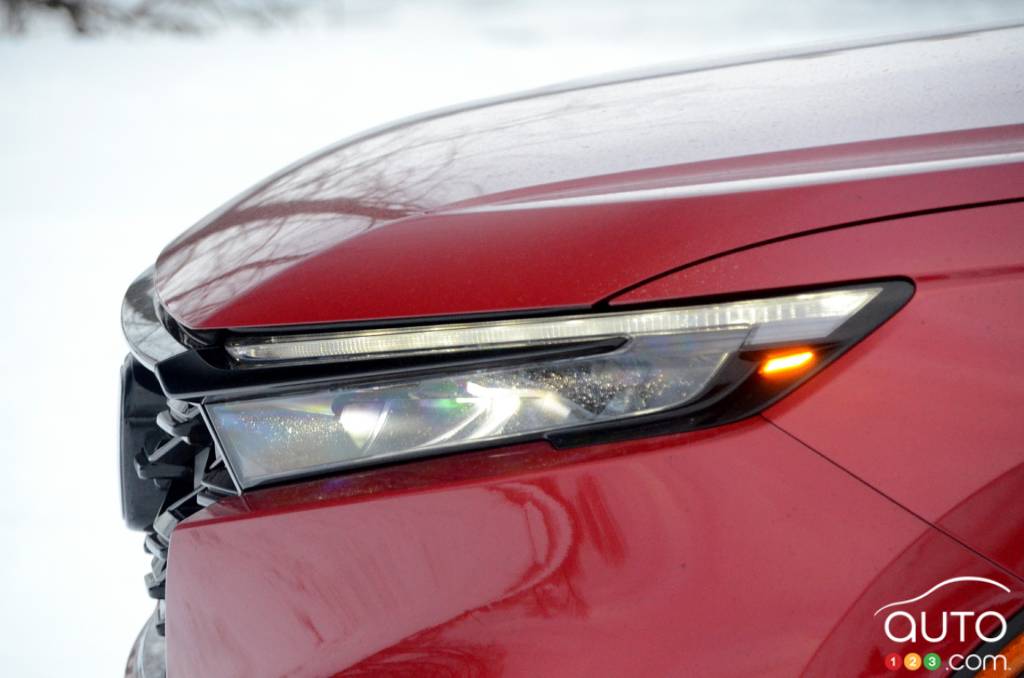 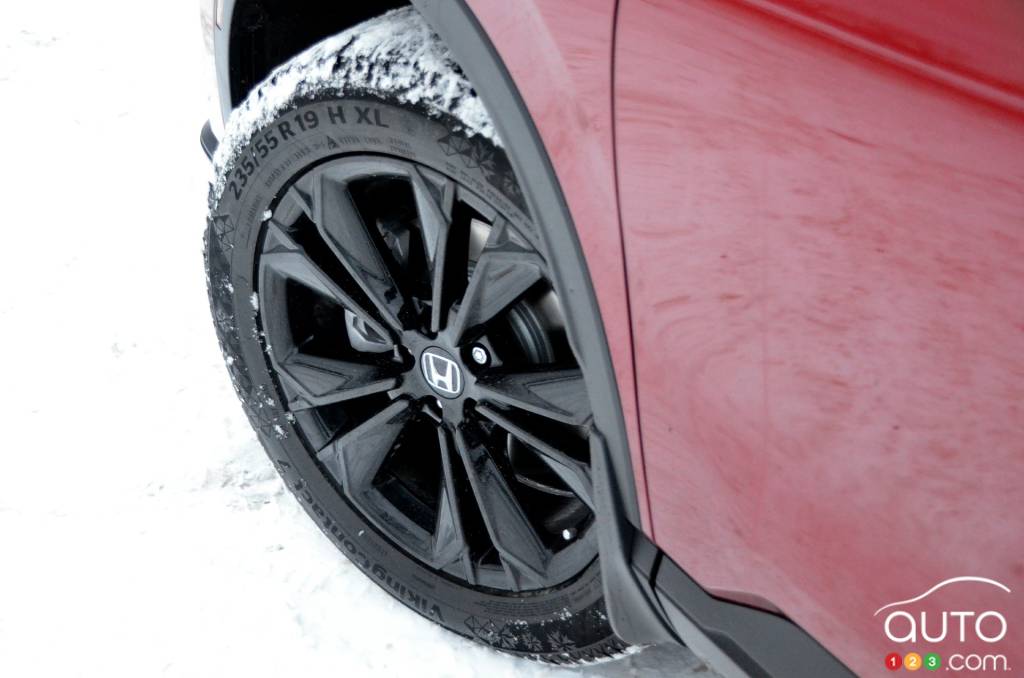 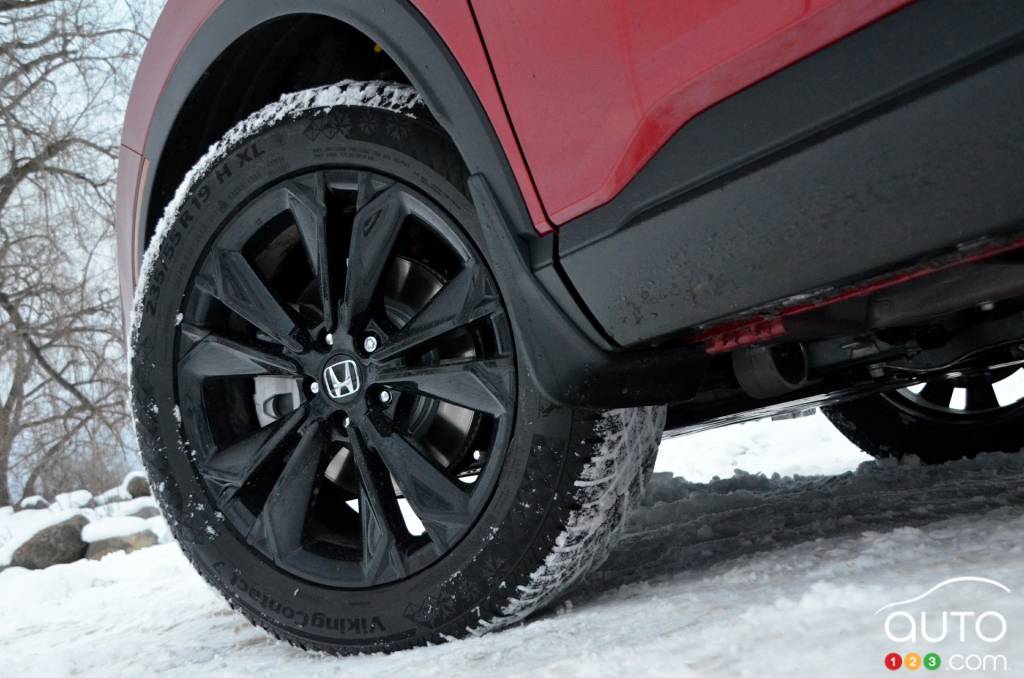 Honda Canada announced today that the revised new 2023 CR-V Hybrid will be built – and sold - in Canada, starting this summer. That’s great news for Honda’s...