Honda has been very busy renewing its model over the past 18 months Automotive columnist: Daniel Rufiange , Updated: 2023-01-10

Honda might not offer the most exciting model range in the industry, but it does promise impeccable quality and reliability; in both those facets the company continues to be a reference in the automotive world.

For 2023, the Japanese manufacturer is introducing revised versions of its Accord, Pilot, Ridgeline and Odyssey models, while the company's first electric SUV is expected with the Prologue.

The Accord is changing completely as the 11th generation of the model is upon us. The new sedan was introduced last November. On the company's Canadian website, the 2023 version does not yet appear at the time of writing.

We do know that three variants will be in the catalog here: EX, Sport, Touring. The last two benefit from a hybrid powertrain, an approach that was on the menu with the outgoing model. The company is banking heavily on this variant, estimating that it may make up as much as 50 percent of Accord sales. The powertrain is the same as in the CR-V SUV, and features a 2.0L, 4-cylinder engine good for 204 hp and 247 lb-ft of torque.

Otherwise, the base-model Accord comes with the 1.5L turbo 4-cylinder. It gets a few improvements but offers the same output (192 hp and as much lb-ft of torque) as in 2022.

The Civic was completely redesigned in the summer of 2021 for the 2022 model-year. Since then, the different variants have shown up in succession, from the sedan and the hatchback to the Type R and Si performance variants. Which means that though it will have taken over a year, all Civics are of the new generation in 2023.

Il also means that, other than the Type R making its debut as a 2023 model, little changes this year. While the Civic is still worth the money, the price hike across the lineup is a disappointment for consumers. The Civic has always been offered affordably. That is no longer the case.

See also: 2022 Honda Civic Hatchback Review: Is the Reign Over?

The smallest Honda SUV also has gotten a makeover for 2023. Here, you can look at the glass half full or half empty.

Those who loved the old HR-V and its incredible cargo capacity thanks to the Magic Seat technology in the back will likely be disappointed.

The HR-V we have now is based on the Civic. It offers less cargo space, but a much more luxurious and better soundproofed cabin. It's also more engaging to drive, but its 2.0L 4-cylinder engine with 158 hp and 138 lb-ft of torque shows the strain when you want to push it a bit.

That's not the point of this urban vehicle that will appeal to the masses, it must be said. Those who now find the CR-V too expensive will turn to this smaller model, even though it, too, is quite expensive.

Still, we can assume it will be as reliable as before and that the build quality is on point. A great value.

Here’s another model that’s brand-new for the 2023 model-year. We're mostly talking about a nice evolution, not a revolution. What's really new for Canadian consumers is the arrival of the hybrid version, which is offered in two ways, just like the gas model. The powertrains are the same as those found in the Accord, except that the 1.5L unit offers 190 hp and 179 lb-ft of torque.

With this model, we're on familiar ground. The quality is there and the driving experience has been enhanced thanks to a stiffer chassis. No question, the CR-V is more solid than ever.

The disappointment, like what we saw with the Civic, is the price range. The base version is close to $37,000, and you can expect to be forking over more than $50,000 for a hybrid variant. 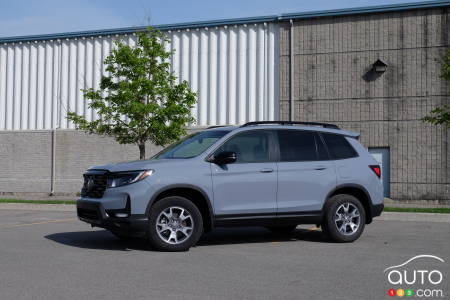 The Passport was introduced in 2020. This scaled-down version of the Pilot offers a five-seat interior layout and a slightly sportier, stiffer driving experience, without sacrificing comfort. After its styling was tweaked slightly in 2022 to match the brand's other new wave of models, there's little change for 2023.

Using the same engine as the Pilot, the Passport is once equipped equipped with a 0-speed automatic transmission.

Another model that has just been presented in a new configuration for 2023. It's probably the one that benefits from the most beautiful design improvement. From being a totally anonymous-looking SUV, it has gone to being a more assertively styled road warrior, especially with the new TrailSport version. It still offers 7- and 8-seat interior configurations, as well as a 3.5L V6 engine.

Note that this engine is paired with a 10-speed automatic transmission rather than the CVT found in most of the other models in the lineup.

This model is to be presented more officially during the year. The company's first electric SUV is the result of a partnership with General Motors, which means that this model is based on the American carmaker's Ultium platform.

The first images of the vehicle were shared last fall by Honda.

More details will follow later this year when the production version is presented, along with the technical specifications that will tell us everything we want to know about the EV. 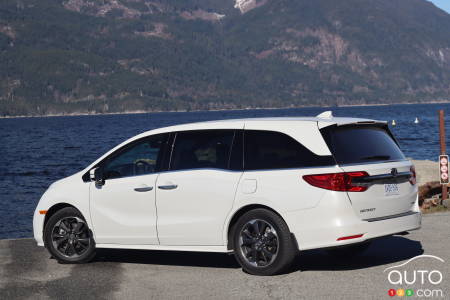 In the case of the Odyssey minivan, there’s actually little to report: the model was last renewed for the 2018 model-year. There is talk (unconfirmed, for now) of a new generation for 2024,; if that happens, we could expect some news during the year.

It's possible that hybridity will be in the cards with the next vintage of this minivan, considering that it's offered in two competitors (from Chrysler and Toyota).

In the meantime, the model is still a safe choice for die-hards who still find, with good reason, that a minivan remains THE most practical vehicle for the family.

There are no changes to report for the Ridgeline pickup in 2023, but considering that it's the oldest vehicle in the manufacturer's lineup (last big change: 2017), we can also expect an announcement soon regarding the next generation. Like the Odyssey, we have to imagine a new model late this year or early next.

In terms of styling, we only need to look at the Pilot to see what we can expect with the next generation, as both models share the same structure and mechanics. In any case, we shouldn't expect anything revolutionary from this model, which already has a loyal and established clientele.

Consult as well our our other 2023 model-lineup overviews:

Honda has announced Canadian pricing for its new Pilot 2023. While the model offers a lot in terms of equipment and features, its price range reflects the ne...

Mercedes-Benz Canada has shared pricing for its 2023 EQE sedan. The all-electric model is expected at dealerships in February.