•    With the Sorento and now the Sportage, Kia now has two PHEV SUVs in its lineup.

•    Of note, there are also regular and hybrid versions of the Sportage.

•    The electric range of the Sportage PHEV is estimated at 55 km.

What gained momentum in 2022 looks set to positively take off in 2023. In front of our eyes, the available of electrified models is mushrooming on the Canadian market. Not only are the number of all-electric vehicles growing every year, but so are plug-in hybrids. This is happening even as many predict the disappearance of the PHEV format as we move to a 100-percent electric future.

From Kia, one of the biggest, newest deals this year is the launch of the 2023 Kia Sportage PHEV. We drove the EX Premium trim of the model, which is likely to be of great interest to Canadian consumers.

In the compact SUV segment, a few models are available with a plug-in powertrain. The Mitsubishi Outlander PHEV, renewed for 2023, and the Toyota RAV4 Prime top the list. We shouldn't forget Hyundai in this equation with its two PHEV SUVs, the Tucson and the Santa Fe. Ford offers Escape PHEV SUV (with only two-wheel drive, however). 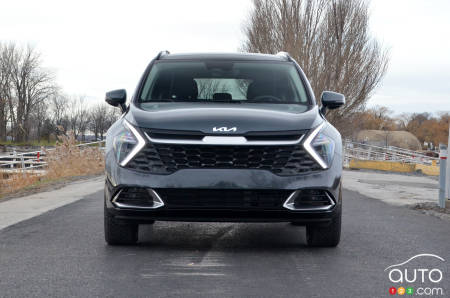 Nothing to report on the outside
As is often the case with these electrified versions, the brand's designers went for a more sober approach than generally used for all-electric vehicles. The Sportage PHEV is thus a carbon copy of the hybrid version of the Sportage, except for the small badge at the base of the rear hatch.

In any case, the current Sportage's rather unique design doesn't really need any extra tricks to distinguish it from other SUVs in the segment. With a fascia that doesn't look like any other vehicle on the road - not even any other Kia - the Sportage is easily recognizable, especially with its boomerang-shaped daytime running lights. 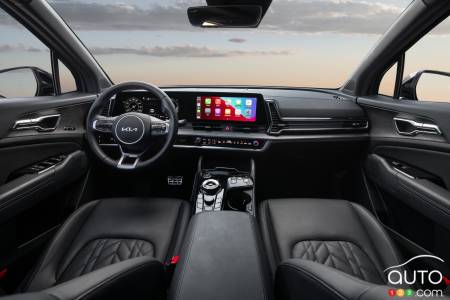 What about the interior?
The new Sportage's dashboard is very attractive, thanks in part to those stylish air vents, but also because of the clarity of its large two-screen panel. The display in the middle of the dashboard is of course touch-sensitive and easy to use thanks to large icons and simple applications.

However, I still have a hard time with the other dual-function touch panel (the screen displays the climate controls, but can also show the audio controls). It's true that you eventually get used to it, but other than making cleaning of surfaces easier, I don't really see any other advantage to this arrangement.

As for comfort, know that unless you insist on always pushing the mechanics to the limit, the Sportage PHEV is a vehicle that prefers smooth, uneventful rides. The soft upholstery and quiet interior are indicators of the kind of comfort the Sportage offers, even with the 19-inch wheels.

Frankly, I have no complaints about the comfort aspect of the Sportage. 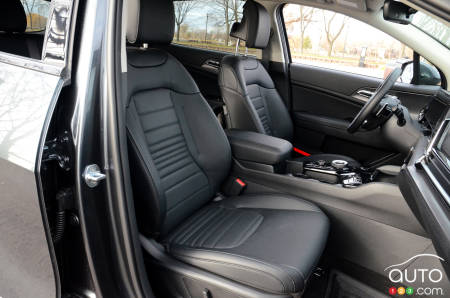 Roominess is another plus. This SUV belongs to the compact crossover category, and it’s mission is to be a family car - like all subcompact, compact and midsize SUVs, for that matter. The redesign of the model has also allowed it to gain a few inches in length, since Kia decided to imitate Hyundai (with the Tucson) and offer the extended wheelbase version. As a result, second-row passengers have more room than in the past. 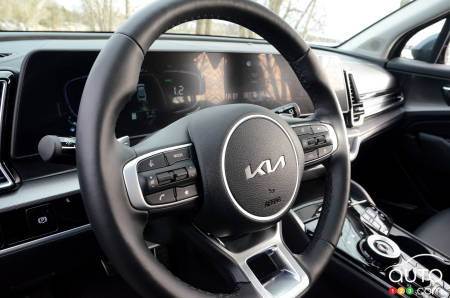 Behind the wheel
Since it's a PHEV, the powertrain is the fastest in the Sportage lineup, even though the small 1.6-litre turbocharged 4-cylinder engine isn't a beast by any means. Combined with an 89.7-hp electric motor and a 17.4-hp hybrid starter generator, the total output is a healthy 261 hp and 258 lb-ft of torque.

These are more than respectable numbers in the compact PHEV SUV segment, though not as impressive as those of the RAV4 Prime.

Note that the transmission is a 6-speed automatic unit and that the Sportage benefits from an all-wheel drive system, thanks in part to the electric motor housed on the rear axle.

Despite the injection of adrenaline aboard this PHEV version, especially in Sport mode, we’re not talking about an athletic SUV. The suspension is soft and ideal our weathered roads, and the steering is competent but not very precise.

In other words, in whatever format you get it, the Sportage is a family-moving SUV and not a sports model. 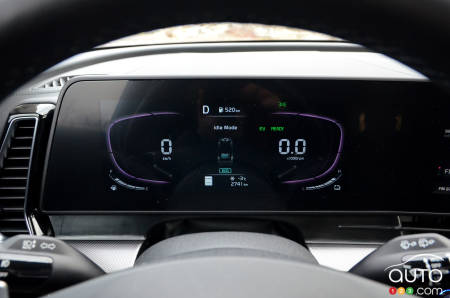 Once again, I enjoyed the chassis' response when the gearbox was shifting. However, the paddles behind the steering wheel don't add anything to the overall experience. For those who want maximum electric mode driving, know that the Sportage PHEV, even with a fully charged battery, does not automatically start in electric mode unless you force it via the EV/HEV button near the centre armrest. If you let the computer decide, the Sportage PHEV takes a while to switch to pure electric mode.

The Canadian EnerGuide calculation shows an overall average of 6.7L/100 km and 2.8Le/100 km. I averaged 4.5L/100 km during those few days when I had to use the heated seats, heated steering wheel and climate control, if only to clear the fog from the car's windows.

Unfortunately, I didn't make it to the promised 55 km in electric mode, but considering the cold (but not freezing) temperatures during my week of driving, I'm not surprised by the 42 km result. With the battery preconditioning feature, it would have been possible to get closer, for sure. 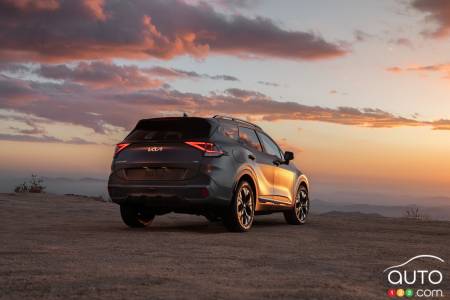 The final word
It's hard to predict how popular plug-in hybrids will remain in Canada in the short-to-medium term. As of now, their presence on our roads is still relevant - especially in regions where the charging infrastructure is not yet optimal - but in provinces where electric cars are in vogue, such as British Columbia and Quebec, PHEVs could lose favour fairly quickly.

Still, it's not surprising to see new models in this particular niche, given that demand remains strong. Mitsubishi and Toyota now have to deal with the non-identical twins that are the Hyundai Tucson and the plug-in Kia Sportage.

It's true that the electric range is a bit behind the best of the group, but for many, this shortfall shouldn't scare them away. The Sportage is all about occupant comfort, and it avoids falling into the sometimes screeching behavior other models with CVTs are prone to. 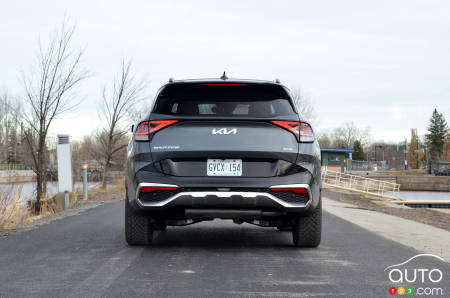 Some of your questions about the 2023 Kia Sportage PHEV:

What is the electric range of the 2023 Sportage PHEV?
Officially it's 55 km (according to EnerGuide Canada).

What is the base price (MSRP) of the 2023 Sportage PHEV?
This plug-in Sportage costs $47,010 CAD before fees and applicable taxes.

Is the Sportage PHEV eligible for government rebates?
The answer is yes, $5,000 federal and $2,500 provincial in Quebec or $2,000 for British Columbia residents. Additional rebates may apply in other provinces, among them New Brunswick, Nova Scotia and Prince Edward Island. 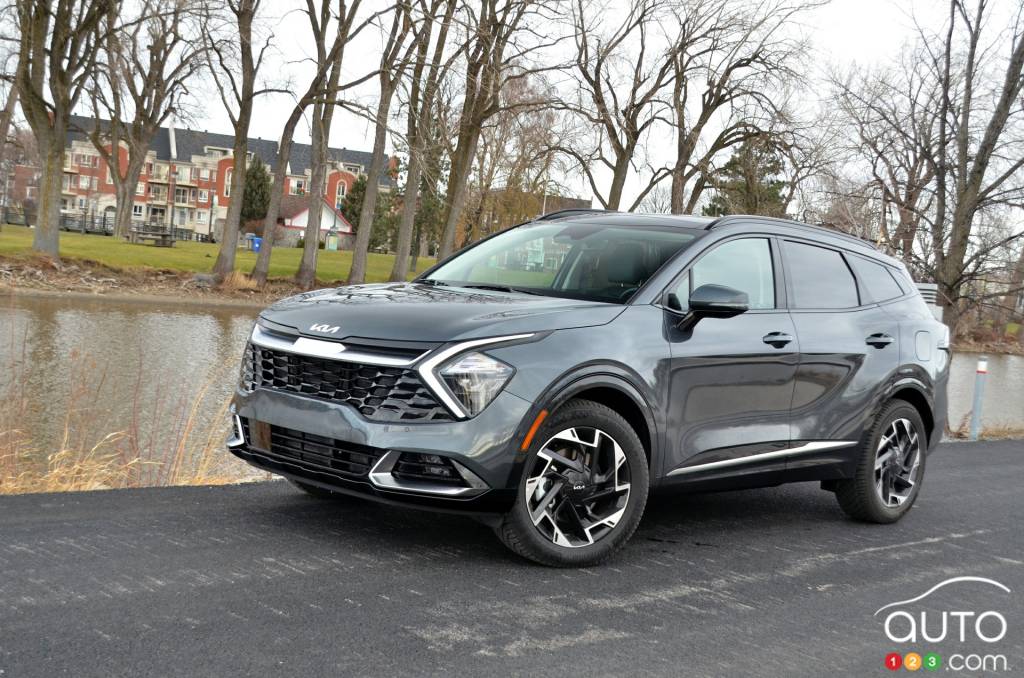 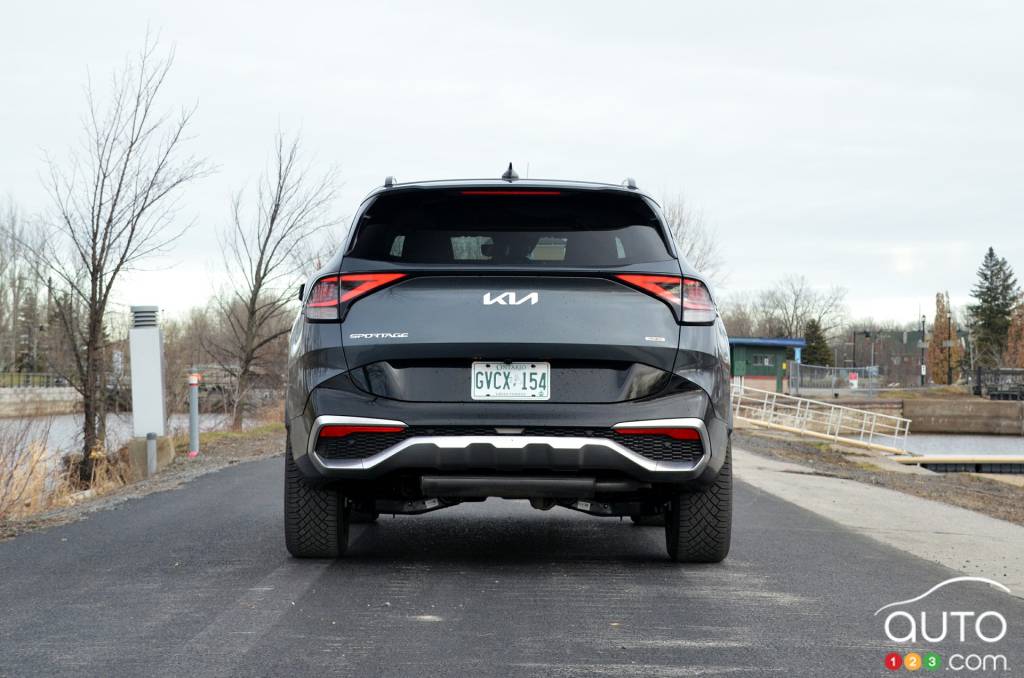 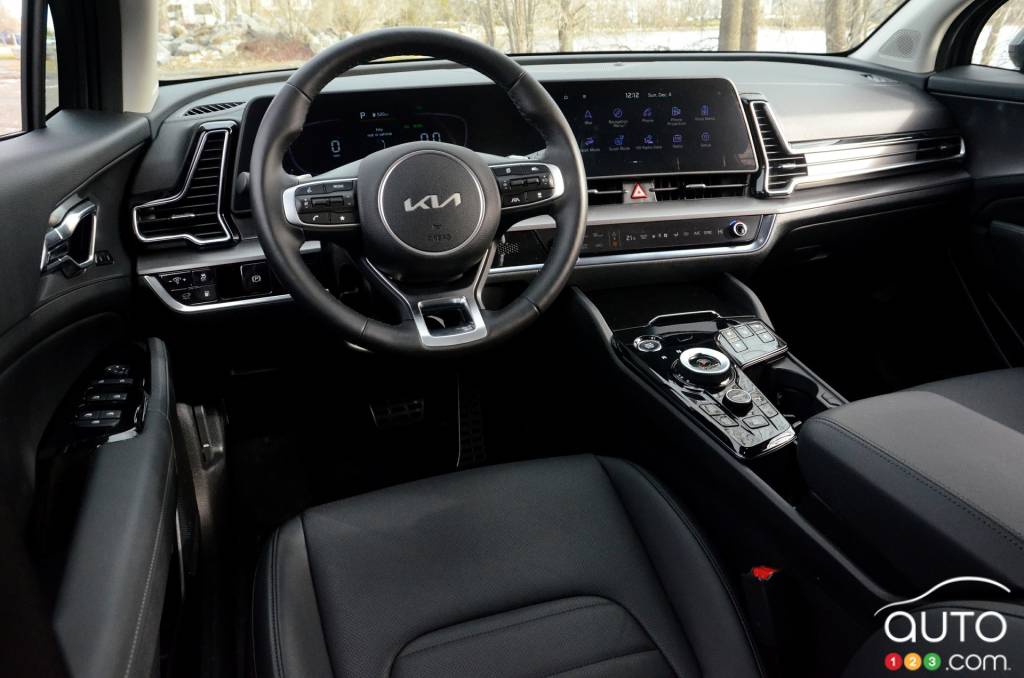 Here are the details about the 2023 Kia model lineup in Canada, including electric models like the EV6 and Niro EV, and the new Sportage PHEV version.

The 2023 Toyota Camry Hybrid is stalwart veteran that continues to prove its relevance. Here's our review, and all you need to know about the model, includin...