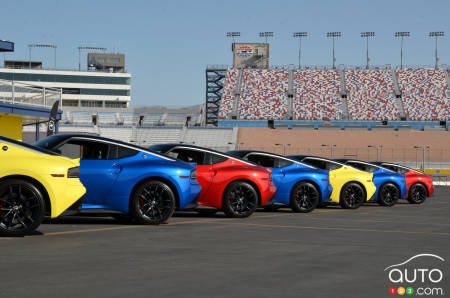 Las Vegas, NV – Nissan chose a desert setting for the first drive event of its new 2023 Nissan Z, to which a handful of eager automotive journalists were invited to test out the potential of the sports car, the new edition of which has been long awaited and highly anticipated by Z fans everywhere. The outgoing generation dated back all the way to 2009, after all.

All that to say the mood was festive – it’s not every day you get to sink your teeth into a new Z! – but there was also a feeling running though our group that the days of the Z such as we know it may be numbered, that the model is destined to pass into history, become a mythic thing of the past. Certainly, while the transition to electric is necessary and beneficial for the planet, something tells us the next Z – if there is one – won’t be the same kind of engaging machine for fans of driving as this 2023 edition is, or as any of its predecessors going back to 1969 were.

As if to remind us of that, Nissan had brought along for this event one of each previous generation of the Z. 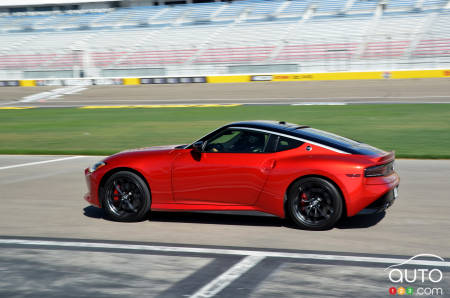 Wherever you sit in the debate surrounding this most iconic model of the Japanese brand in North America and its future, the new edition of Nissan’s resident sports car has a purpose above all others, and that’s to plaster a smile on the face of whoever drives it, and do it without costing buyers an arm and a leg. Maybe an arm, mind you, because at $46,498 for the Sport version with manual gearbox the new Z is not exactly cheap, but compared to other models that come with a 400-hp powertrain, the Z is reasonably priced!

Full circle
Here’s one benefit of meeting a car like the Z in person. I had to admit, it’s better-looking in person. That’s actually a fairly common occurrence, especially when it relates to a model that takes a retro approach to re-seducing customers who are starved for true sportiness. Back when the model got its global online reveal just under a year ago, I was skeptical regarding the new Z, but after spending a day with it, I changed my tune. Nissan’s designers did an upstanding job giving the car its own, beguiling styling. 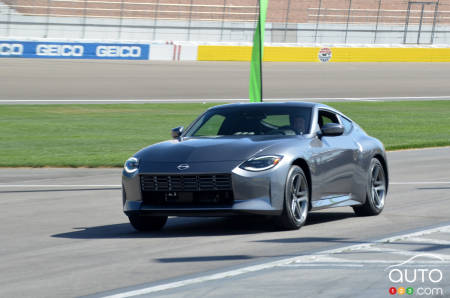 For example, the front end, longer than before due to the inclusion of two coolers supplementing the radiator sitting in front of the new 3.0L engine, pays tribute to the original 240Z with its almond-shaped headlights. The grille is not unrelated to the first Z’s, but it gets a modernized finish. As for the hood with its central bump, it also refers back to the early versions of the model.

Another detail worth noting is the silhouette of the car, much closer to that of the 240Z, notably because of the longer overhang, but also because of the silver band that follows the roofline to the end of the trunk and accentuates the impact of that back line.

The 2023 Z’s posterior, meanwhile, looks taken almost directly from the 90s-vintage model, its lights harkening back to that era’s 300ZX. Personally I have misgivings about that particular part of the car, but automotive tastes are like any other tastes – personal! Whether you’re a fan or not, the back end is better adapted to the car’s flanks, which gets softened curves on the rear wings, most notably. 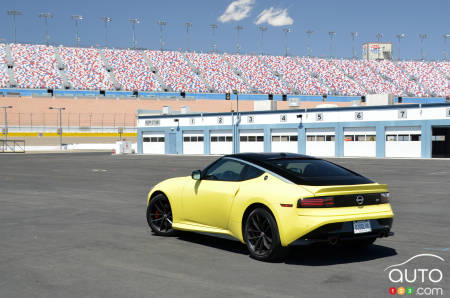 The result of the styling work is that the new 2023 Nissan Z won’t be mistaken for any other sports car on the road. Ford has its Mustang, Porsche its 911; Nissan has its Z, and it finally gets a modernized edition to show off.

Sport or performance?
Along with choosing the transmission they want – the Z comes with either a 6-speed manual or a 9-speed automatic unit – buyers will also be required to choose between the base Sport version of the Performance variant, which gets more equipment.

Note that there will also be a Proto Spec version, which pays homage to the 2020 prototype and rides on bronze-coloured wheels and gets an exclusive interior. But that limited edition will only be hitting the market in 2023.