The Honda Pilot and Acura MDX have long imitated each other, even as they both kept their distinct, respective places in the hierarchy within the midsize SUV segment. The clientele that gravitates to each of these two models is different, the Acura MDX being the more high-falutin’ cousin and the Honda SUV more discrete and family-focused.

But both utility models have been equally adept at meeting the needs of their clientele. And different though they may be, these are two related three-row SUVs that share a number of components within the Honda automotive group.

The Pilot is a versatile vehicle designed to satisfy the needs of the majority of medium-to-large sized families. The refont it’s gotten for 2019 makes it an even more attractive choice. And what’s more, it’s one of the few vehicles in its category to offer room for eight occupants thanks to its three rows of seats.

Specifications of the 2019 Honda Pilot 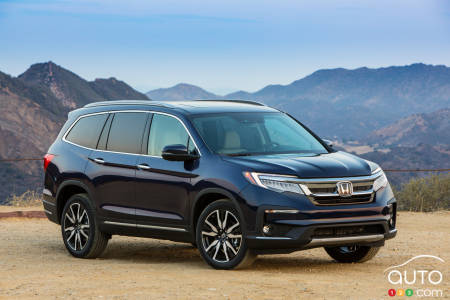 Pretty with a minimum of fuss
The Pilot doesn’t exactly stand out from the masses of utility models that have taken over our roads, but it manages to be fairly pretty nonetheless. It carries with poise – and conservatism - the burden of being the brand’s flagship SUV. The interior is handsome enough but definitely prioritizes comfort and practicality over flash. Buyers can add a few options to make things a bit more luxurious, like leather seating or automatic climate control, and bring it into sight of the MDX from Acura.

A wide range of technologies are present in the Pilot, starting with the standard Honda Sensing drive assist package, which includes adaptive cruise control, collision-attenuation braking, and lane keep assist. Climb up the product range to one of the top three trims and you get the Cabin Talk system. Other features can be had as additional options, for instance Apple CarPlay and Android Auto integration and safety features like blind spot monitor and rear transversal traffic monitor.

Never underestimate the Pilot
Those three rows allow the Pilot to take in up to eight occupants. Access to the third row is actually quite easy thanks to the second row that can be slid forward. Still, access doesn’t guarantee comfort, and be forewarned that that last row is strictly for kids - especially if you’re going to fit three abreast. 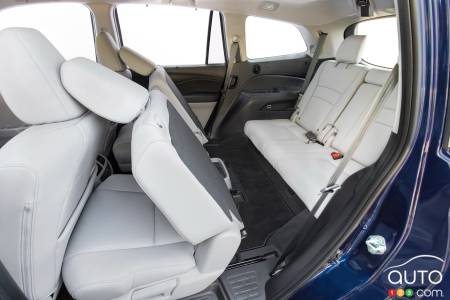 Under the hood of the 2019 Pilot sits a 3.5L V6 engine able to generate 280 hp and 262 lob-ft of torque. A 9-speed automatic transmission is available for Touring versions, with the default unit being a 6-speed automatic.

On the road, the Pilot is the quintessential everyday safe people-mover, but it shouldn’t be underestimated. It don’t give off the slightest whiff of sportiness, but it’s super comfortable and it can be relied to do what you expect of it. And mainly that’s getting the troops from point A to B in as much comfort as possible, safely and reliably. 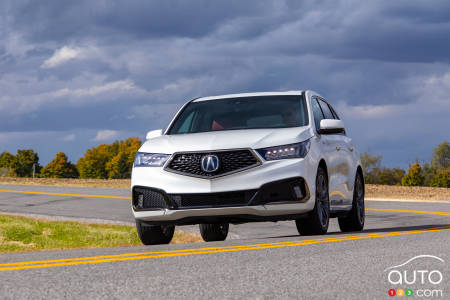 The Acura MDX is hands down the more dynamic of the two midsize utility models under our microscope, and it’s also the more luxurious – no surprise given its roughly $10,000-higher price point. The MDX’S styling is not meant to pass unnoticed, and it doesn’t. The pentagon-shaped front grille and the LED headlights are particularly noteworthy elements that stamp it as an Acura.

Specifications of the 2019 Acura MDX

Three rows of high-endedness
The added pound of flesh you pay for the MDX also buys you a far more luxurious interior than the Honda can muster. The materials are of premium quality, and the overall environment is very pleasing, looks-wise and feel-wise. From the 14-way power-adjustable seats to the ELS high-end audio system, everything tells you you’re in a luxury vehicle. Among the options you can add are
Apple CarPlay and Android Auto, Siri Eyes Free and blind spot monitor.

Like its Honda cousin, the MDX comes with three rows, except that here the last row is made for two, so the SUV is a 7-seater. The front passengers get a little bonus space compared to the Pilot, but the second and third rows are roughly the same in terms of room. 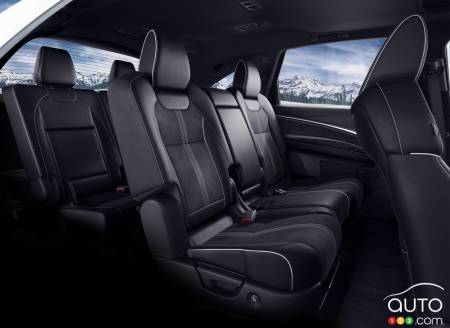 Two engine choices
The MDX is powered by a 3.5L V6 wedded to a 9-speed automatic transmission; together they deliver 290 hp. The second option is a hybrid system, two electric motors helping to bring the output up to 321 hp.

The MDX gets an all-wheel-drive configuration, but the system optimizes performance on dry roads by directing engine power depending on weight distribution.

On the road, the MDX delivers sufficient acceleration when called upon. The 9-speed transmission, which on the Pilot is found only in the Touring version, adds a welcome dose of dynamism and sportiness to the Acura’s performance.

If you have a decent-sized family and the kids aren’t too tall yet, the Honda Pilot has the considerable advantage of offering room for 8. Though if you don’t think you’ll use that third row very much, you might want to consider if this configuration is the best use of space for you…

Of course, there’s the significantly lower price point of the Pilot, which might be enough to have you say goodbye to the idea of vehicular luxury.

This one’s tailor-made for dynamic families, maybe those with teens instead of smaller kids. And that’s the way Acura skews the technologies on offer, such as the premium ELS audio system. Acura also offers the interesting Sport Hybrid configuration, which, once you’ve shelled out the big bucks at the outset, will mean lower gas expenses from then on.

Both the 2019 Honda Pilot and the 2019 Acura MDX run on a 3.5L V6 and the same 9-speed automatic transmission (though for the Honda you have to climb up the trim ladder to get it). Both have three rows, obviously, and the two models are pretty even-steven when it comes to fuel consumption.

The Honda Pilot and Acura MDX have many points in common and share many of their mechanical bits, but the differences are substantial as well, starting with the pricing. From that follows variances in the level of luxury and functionalities that are included. The big Honda has the advantage of being able to take in 8 people at once, but that ability can also be construed as a misuse of space when you’re shuttling fewer people than that around.

Overall, the Pilot actually edges close to the minivan format, while the MDX is a prestige SUV with at least some sportiness to it. If practicality and lower monthly payments are high on your list of priorities, the trusty Pilot is for you. But if you really like pretty things and sporty driving, and you don’t mind shelling out another 10 grand or more on your next ride, you could do much worse than the Acura MDX.

-    No hybrid option
-    The 9-speed automatic transmission is only optional
-    Don’t shoehorn adults into the last row!

-    Overall styling, both inside and out
-    Good number of standard features, and many options to choose from
-    The Sport Hybrid configuration
-    The luxury of it all

-    The luxury pricing of it all
-    No panoramic sunroof, even as an option

The 2019 Acura MDX A-Spec is the beautified trim of the carmaker’s popular mid-size luxury crossover, a version in which the styling finally does justice to ...