Denver, CO – Google “Denver Airport” or “DIA” and you’ll find pages and pages of articles talking about a number of conspiracy theories surrounding it. They range from a statue of a giant horse with glowing red eyes that fell on its builder, to the questionable placement of the airport’s six runways, to the weird murals found throughout that look strangely like Nazi propaganda. Its footprint is also the size of Manhattan and its construction went $2 billion over budget; who knows what’s going on underneath all that?

Like DIA, the F-150 diesel has become a bit of a mystery. Even after Ford announced that it would be happening, a refreshed version of the current F-150 arrived for 2018 without offering a diesel at the outset. Had VW Dieselgate taken its toll? Was Ford a little worried the optics surrounding a new diesel truck just wouldn’t work? Was it still coming?

Sure enough, it was and has arrived a very capable – and surprisingly refined – entrant into the F-150 lineup.

Powerstroke of genius
Keen to align the F-150’s powerplant with the rest of the diesel range from Ford, the new truck’s engine gets the “Powerstroke” moniker, the likes of which we’ve seen on F-250/350 pickups and so forth for decades.

Ford is also claiming 8.0L/100 km of highway fuel economy (about 30 mpg); we were given the opportunity to test this with an unladen truck and managed under 7 litres per. More impressive, perhaps, is the 10.9 L/100 km we saw while hauling 308 kg of dirt bikes on steep grades through Colorado’s Rocky Mountains. Engine auto start/stop comes standard on all trims, making it easier to achieve those figures in the city. It’s nicely un-invasive, hardly making its presence felt once it starts up again from stop.

Of course, when it comes to diesel engines, we all know that patented diesel rattle can be a deal-breaker for some. With that in mind, Ford has added sound deadening materials behind the dash and in the A-pillars to reduce interior noise, while a special insulated engine cover keeps it quiet for passers-by. Indeed, early on in our drive, I was totally surprised when I stepped out of the vehicle and heard a slight diesel rattle, as I’d forgotten I was in a diesel at all. Ford has done very well in the refinement department, to the point where it’s one of the defining features of the truck. That’s no small feat for something powered by a 6-cylinder diesel lump.

Ford turned to its EcoBoost engines for a bit of their tech, too, namely the diesel’s compacted-graphite iron block and forged-steel crank. They’ve also used an engine-driven cooling fan as opposed to an electronic one, providing better performance in adverse conditions.

Up and at ‘em
If you’re worried that all that refinement would get in the way of the truck’s abilities, you needn’t be.

Power is made effortlessly with peak torque coming at just 1,750 rpm; there’s power on tap no matter how much speed or weight you’re carrying. The 10-speed tranny, meanwhile, is very adept at keeping you in the meat of the powerband and doesn’t fuss about too much through the range. This is especially pertinent in tow mode, where gears are allowed to hang a little longer if that’s what it takes to tackle that grade or get up to highway speeds.

It’s not without its hang-ups; when we towed a 2,286 kg trailer, the truck would huff and puff on steeper grades, making that refined cooling system all that much more important. While the suspension has been modified to handle both the extra weight of the engine (about 172 kg more than the 3.5L EcoBoost V6) and the likelihood of doing more towing, the brakes have not been changed; a bigger brake option would likely please more hardcore towers. Having said that, we experienced no brake fade during our test which included descending some pretty steep grades.

Shaking the stigma
The other knock against the F-150 diesel will likely be the price; for retail customers, the diesel can only be had on Lariat, King Ranch and Platinum SuperCrew models, which means the cost of upgrading from a Lariat equipped with the base 2.7L V6 engine (base price: $43,449) is $7,500. At the other end of the spectrum, $5,650 will get you from the 5.0L V8 (Lariat base price: $45,299) to the diesel. The fact that the 3.5L EcoBoost can tow more than the diesel will be another point of contention, though you’re never going to get the same fuel economy when towing with a 3.5L truck. In addition, any truck equipped with the diesel gets the tow package as standard (upgraded radiator, transmission oil cooler, trailer back up assist, class IV receiver), meaning you don’t have to pay again for the stuff that makes towing – essentially the diesel’s raison d’étre – so much easier.

There’s no question that Ford has made sure to tick the most important boxes that make diesels so attractive. The F-150 can haul, it can tow, it’s got power whenever you need it and the fuel economy is there. The incredibly quiet operation, meanwhile, will quell the fears of those who love the idea of diesel power and economy, but can’t shake the fear of driving around town sounding like a class 8 big rig. 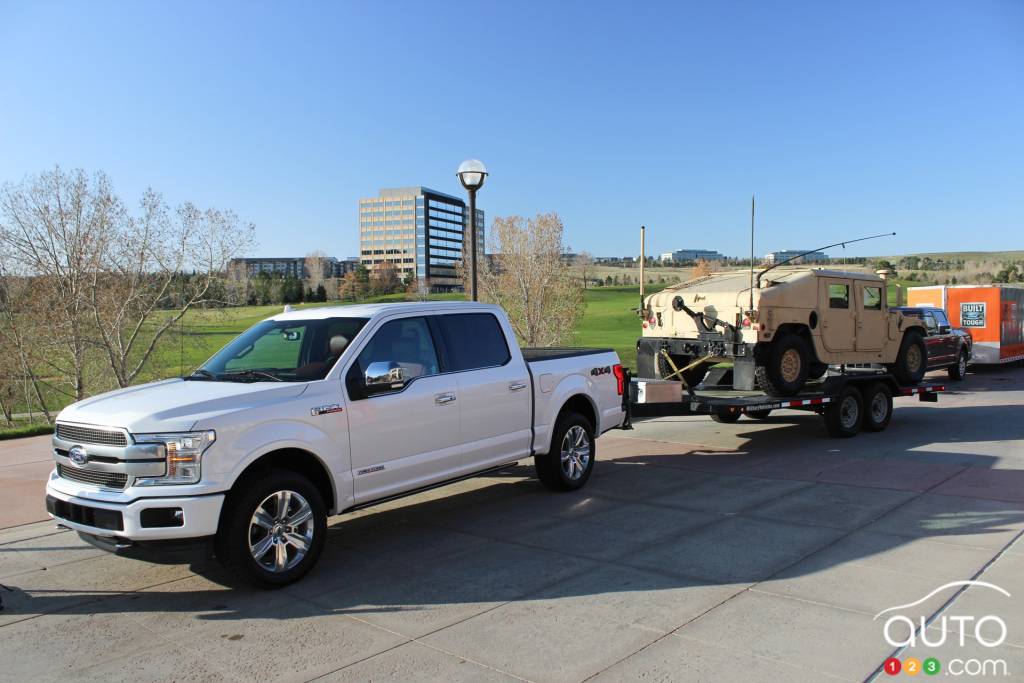 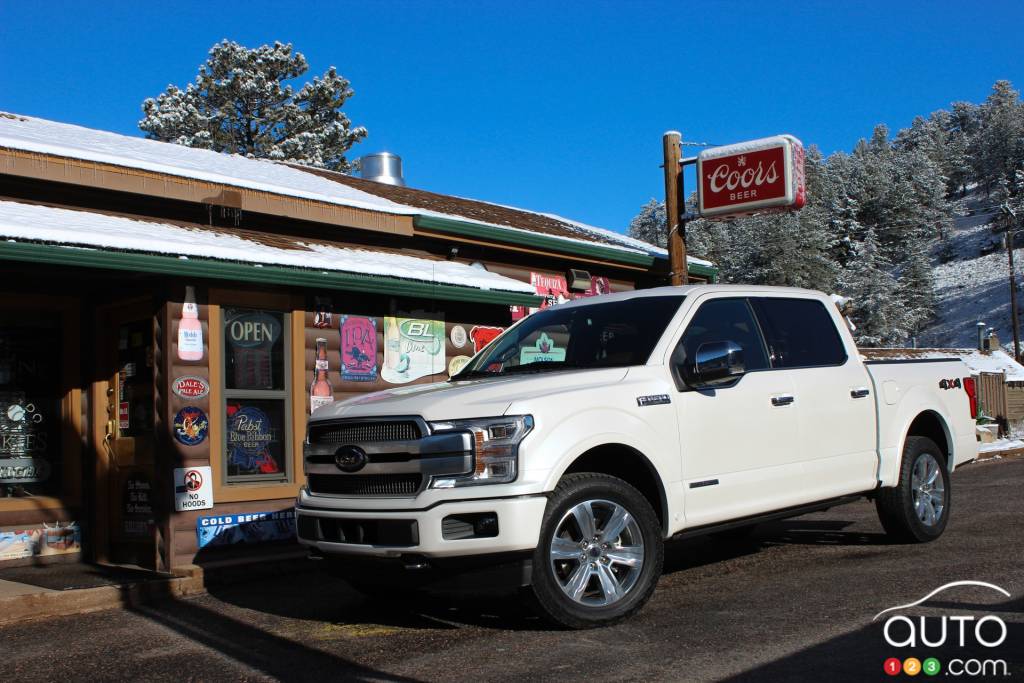 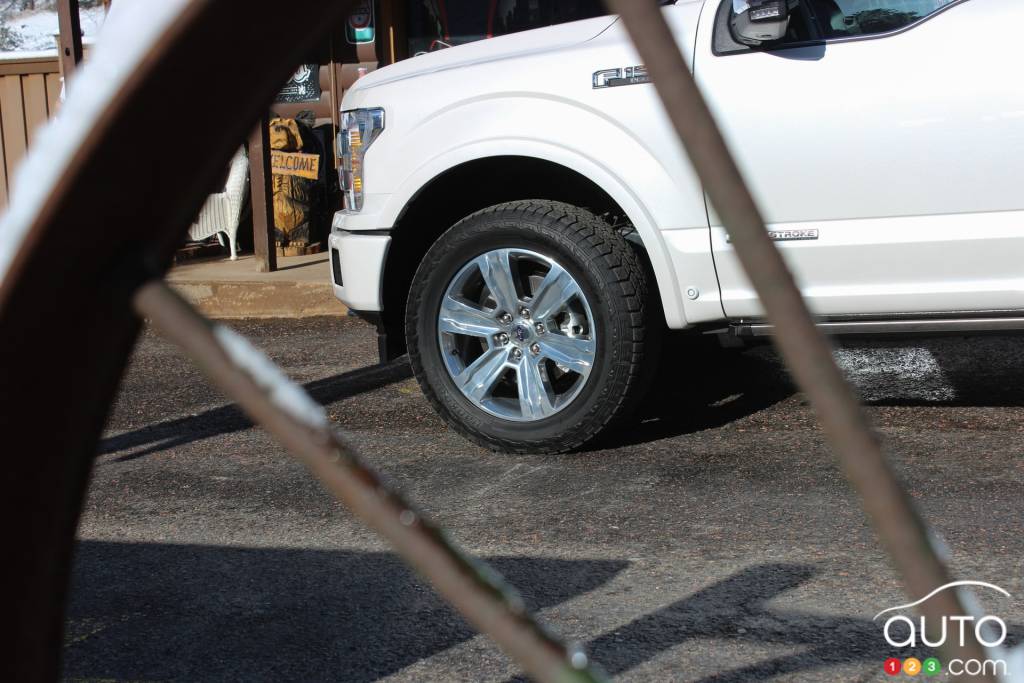 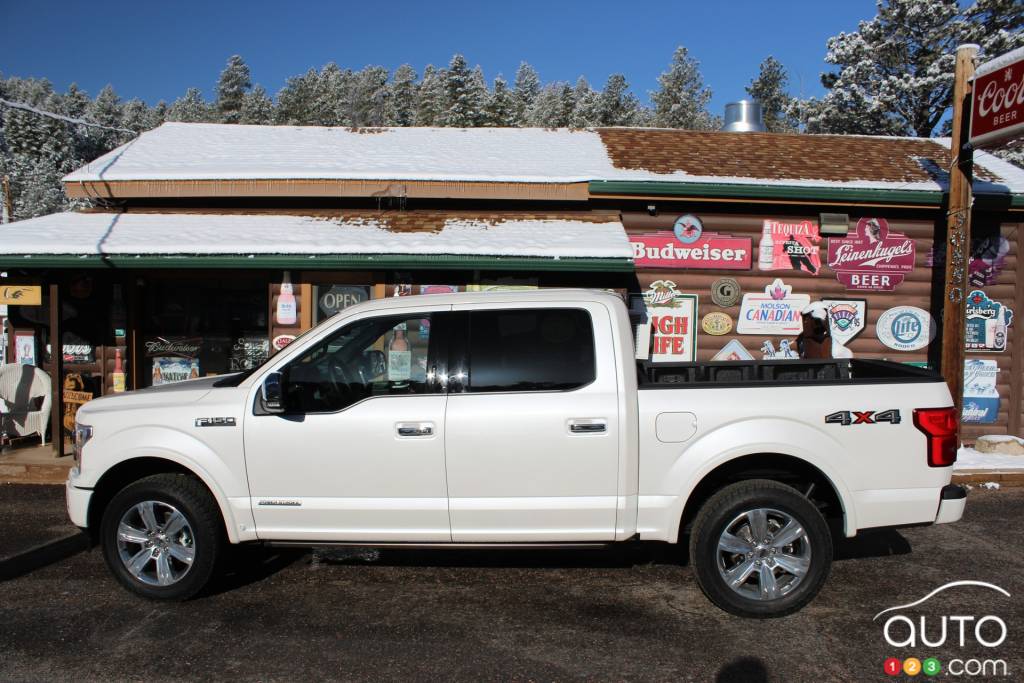