Toyota has issued a recall of around 1,700 2018 Camry models due to a rather unusual problem, one that could potentially to engine failure. An error at the assembly plant led to the affected models receiving the wrong-size pistons. The oversized components could cause problems when accelerating, and perhaps lead to the engine failing completely.

"In certain conditions, this may cause the vehicle to run rough, create an abnormal sound, emit smoke from the exhaust, and illuminate warning lights and messages. In some cases, a reduction of power may occur and the engine could stop running."

For the moment, no on-road incidents are known to have resulted from the problem. However, complaints made to the NHTSA (National Highway Traffic Safety Administration), the U.S. equivalent of Transport Canada, have detailed issues encountered when accelerating the vehicle.

If yours is one of the vehicles affected by the recall, Toyota will simply replace the engine of your 2018 Toyota Camry. 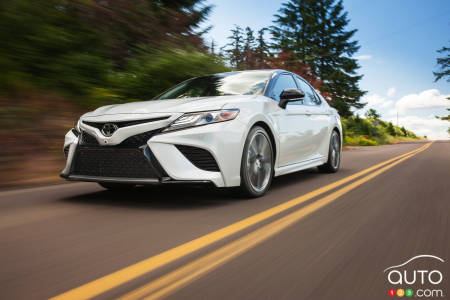 Toyota has issued a recall of just over 1 million vehicles, including 7,200 registered in Canada, over a fire-related problem. In Canada the recall affects 2...