The grandiloquent new 2018 INFINITI QX80 was unveiled today at the 2017 Dubai International Motor Show. It reveals the evolution of the company’s Powerful Elegance design language and has been upgraded with a more refined interior, as well as a number of new technologies.

Sales of full-size SUVs are on the rise in many markets around the world, and Nissan’s luxury-car division is poised to take full advantage – an especially crucial move since the brand’s competitors are putting in aggressive efforts of their own, as witnessed by the new Lincoln Navigator and the upcoming BMW X7, among others.

“The new QX80 will boost INFINITI's presence in the full-size SUV segment by evoking the spirit of inclusive luxury travel. Customers expect maximum comfort, practicality and style – and the 2018 QX80 delivers."

In addition to the styling changes and new colour choices, the new QX80 gains an INFINITI-first smart rear-view mirror, an updated interior decor and several new options packages. It will be powered by the same 5.6L V8 with maximum output of 400 hp as the previous edition.

Production of the 2018 INFINITI QX80 is already underway in Japan, and the car is expected to debut at Canadian dealerships by the end of the year. One of Auto123.com’s contributors will in fact be on hand for the North American launch, set for the beginning of December, and will be providing us with his first impressions in the days after.

Canadian pricing has not been announced, although we do know that in the United States the price for the 2018 model increased by less than $1,000. 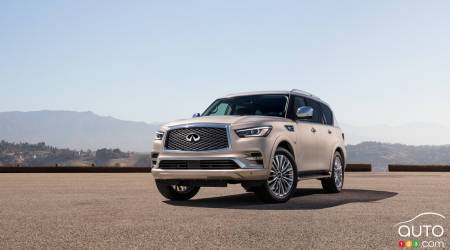 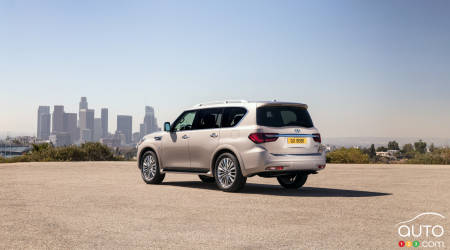 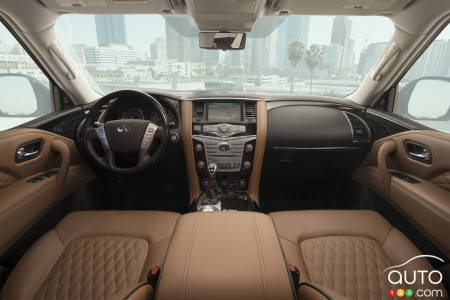 The 2018 INFINITI QX80 has been revised but stops short of a reinvention. The SUV can accommodate 7 or 8 occupants and is as versatile, comfortable and luxur...