After getting its world premiere last fall, the all-new 2018 Volkswagen Atlas 7-passenger SUV wowed crowds at North American auto shows this past winter and spring. Assembled at the German manufacturer’s American plant in Tennessee alongside the Passat, the Atlas is the largest SUV ever produced by VW in the United States.

Just in the past few days, the Atlas has been made available at Canadian Volkswagen dealerships, and is being offered in seven different exterior colours. A 2.0L, 4-cylinder TSI engine delivering 235 hp and a 3.6L FSI V6 producing 276 hp are available in the Trendline ($35,690) and Comfortline ($39,690) versions, while only the latter is offered in the top-end Highline edition ($48,990).

In case you missed our earlier reviews of the 2018 Volkswagen Atlas, we have road tests on snow and on dry road conditions for you. You’ll also want to check out VW’s hilarious marketing campaign for the Atlas, as well as the eight other ads that showcase the new model. 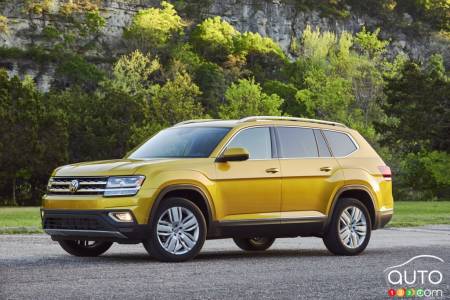 Learn more about the new Volkswagen Atlas and discover why it was chosen best in its category during our 2018 Auto123.com Awards.

10 Ways the 2018 Volkswagen Atlas Will Please Your Family

Here we go, revisiting the all-new 2018 Volkswagen Atlas, a seven-passenger midsize SUV available in Canada since a few weeks ago. Auto123.com gives you 10 g...

Articles By
Auto123.com
The Audi House of Progress Is Coming to Montr...
Article
The Penultimate 'Last Call' 2023 Challenger A...
Article
Volvo Introduces Driver Understanding System ...
Article
More from this author