Bidding to respond in kind to the freshly updated 2018 Ford F-150, Fiat-Chrysler is preparing to introduce a new generation of its standard-bearer truck. The 2019 RAM 1500 is a hotly anticipated truck by consumers, and this week we got an unplanned early eyeful.

According to the Automotive News website, strong winds lifted up the cover blanketing the model at FCA’s technical centre in Auburn Hills, near Detroit, exposing its redesigned fascia, headlights, badging and tailgate long enough for some photographers to reel off a few quick shots.

From those, we can glean that the large chromed grille has been made somewhat more discreet and forms a more harmonious whole with the headlights. In the rear, even though the manufacturer had patented a new dual-opening tailgate design (opening downwards and in the middle, French-door-style), it appears that was not used for the new 1500.

The 2019 RAM 1500 will get its world premiere in January at the 2018 North American International Auto Show in Detroit, then go into production immediately afterward and be ready for delivery by dealers during the spring. 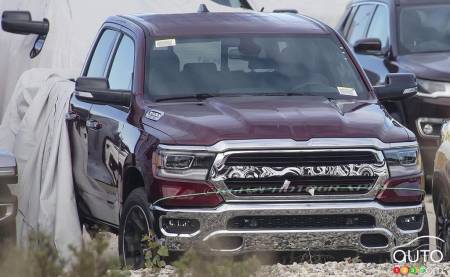 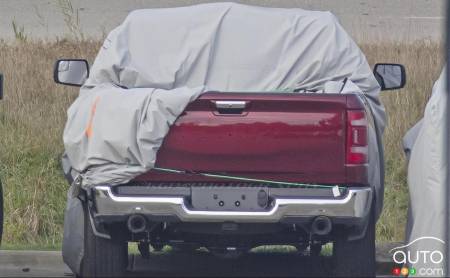 Scheduled to arrive at dealerships this spring, the Sport version of the new RAM 1500 will not be available in the United States; only Canadian consumers wil...

Outdoors enthusiasts will love the possibilities provided by the 2019 RAM 1500 and its catalogue of over 200 Mopar accessories. We take a look at how you can...