It’s not every day we report on news about delivery vans. But make no mistake, the two main segments in which the main players are products by well-known automakers (Ford, FCA, GM, Nissan and Mercedes-Benz) are as well-populated and competitive as any in the industry.

This week we’ve learned of a significant change coming to a Ford product in the domain. For 2020 the Ford Transit is getting a few tweaks and one bigger change that will interest potential buyers in Canada: the addition of all-wheel drive as an option.

This will make the Transit the second model in its class to come with AWD, after the Sprinter from Mercedes-Benz.

Ford says that the feature had been considered for inclusion when the Transit was first developed, and that therefore the vehicle’s floor won’t need to be adjusted (read: raised higher) to accommodate the system, so that loading and unloading cargo is not made harder.

The other notable point is that with the system being developed, torque can be sent entirely to the front wheels when needed to maximize traction. This is particularly relevant in cases where the weight in the back of the truck is insufficient to provide optimal road grip. Different drive modes will also be integrated into the system to improve road handling on different types of road surfaces and conditions. 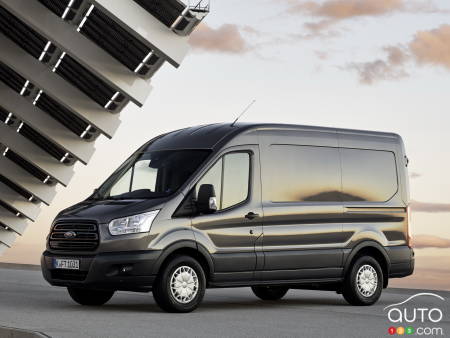 Other significant changes being brought by Ford to its Transit include the introduction of two new engine choices. One of them is a 3.5L V6 that will replace the existing 3.7L, and the other is a 2.0L 4-cylinder twin-turbo engine that will take the place of the 3.2L diesel engine of the current edition of the van. The 3.5L EcoBoost V6 will remain as part of the product offering.

Ford’s new 10-speed automatic transmission will also make its debut in the Transit for 2020.

Unsurprisingly, new drive assist systems are on the way as well, including pre-collision assist with automatic emergency braking and the Ford Co-Pilot360 system.

The FordPass Connect modem will be included standard, and it will bring 4G LTE WiFi connectivity. This system lets 10 users connect simultaneously.