Ford announced today it is recalling over 76,000 2020 models in Canada over an issue with the backup camera image displayed on the centre screen – part of a North American recall of more than 700,000 units.

The problem is due to a poor connection in the camera, and it can cause the image provided by the backup camera to blink on and off in the display screen. Obviously if that happens at an inopportune time that can raise the risk of an accident.

The vehicles affected include a range of Ford and Lincoln products: The Ford Edge, Escape, Expedition, Explorer, F-150, F-250, F-350, F-450, F-550, Mustang, Ranger and Transit, and the Lincoln Nautilus and Corsair. All are of the 2020 vintage. In the case of the 2020 Mustang, it's the second recall this week that points the finger at that model (the first involved defective brake pedal brackets).

The camera with the potential bad connection was supplied by Canadian supplier Magna.

Ford says that it is unaware of any injuries resulting from the issue, and has promised notifications will be sent to owners of affected vehicles starting in early November. 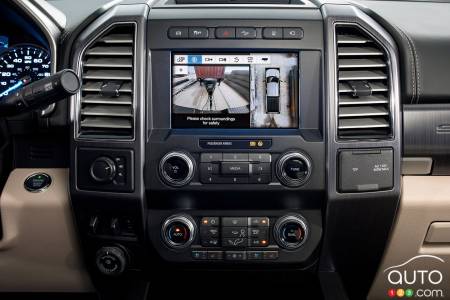 Ford must issue five separate recalls, all involving more than one million vehicles. Some of these concern problems that are less dangerous to users, but oth...