The first Genesis SUV has been officially unveiled in South Korea. We had a preview last week of the Genesis GV80, but there were a ton of holes in the information available to the public. With the official presentation that took place on the other side of the world, we finally know more about what this SUV has in store for us.

First of all, aesthetically, the model has remained faithful to the concept version and everything that we've seen so far. The general lines are fairly generic but make for a whole that’s not unattractive. On board, the presentation is more ostentatious. The company also did everything it could to keep its very first utility model as lightweight as possible. The hood, doors and tailgate are made of aluminum, for example. Aside from the styling, we learned more about the mechanics that will power it and the equipment that will be included. In the first case, three engines will be called upon to serve it, but the diesel powertrain will not be offered here. That leaves us with two choices.

The first is a 2.5L, 4-cylinder turbocharged engine that could be similar to the one set to power the next Hyundai Sonata N-Line. This unit delivers 290 hp and 310 lb-ft of torque.

The other option is a 3.5L 6-cylinder engine, but right now it’s not yet known which one it will be. In fact, the Hyundai-Kia group doesn't currently have a powerplant of this size. Are we looking at a reworked version of the 3.3L twin-turbo V6 that powers all three Genesis sedans as well as the Kia Stinger? If so, we can expect more power than the 365 hp and 376 lb-ft of torque that presently appear on those models’ spec sheets.

All engines will be mated to an 8-speed transmission. Rear-wheel drive models will be available, as will an all-wheel-drive configuration. For models destined for North America, the rear differential on all-wheel-drive versions will be limited-slip. 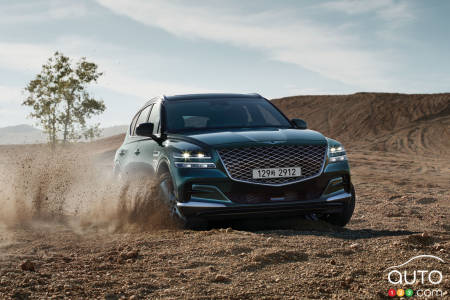 In terms of equipment, expect the latest and the best. For example, a camera reads the road ahead and send the information to the adaptive suspension, which adjusts accordingly - all electronically. The navigation system is of the augmented-reality sort, as you find in Mercedes-Benz products.

A 14.5-inch screen dominates the dashboard and is able to recognize handwriting done on the screen. The cruise control is also equipped with artificial intelligence that allows it to adjust to the owner's driving style. The fact that one of the options is heated and ventilated rear seats gives us an idea of what to expect in terms of standard equipment on this model.

Versions and prices for our market will be divulged when the model is presented here; slowly but surely, however, the product offering is starting to take shape.