Subaru Canada today announced its pricing structure for the different versions of the 2020 Forester SUV. The company also provided some details about the trims that will be available to consumers for the next year.

Most notable is the upgrade in included safety and drive assist systems across the product range. The EyeSight system that includes lane keep assist and rear seat alert is now standard equipment in all versions of the Forester.

That rear seat alert system takes the form of both sound and visual warnings. The function is rapidly spreading across the industry and will definitely save lives, but it will be impossible of course to know how many. Clearly, it’s one of the best innovations the industry has come up with in recent years.

In all, the lineup for the 2020 Forester includes six versions: Forester, Convenience, Touring, Sport, Limited and Premier. See below for the pricing structure.

It’s notable that right from the base model on up, Subaru is including an impressive array of standard equipment. All Foresters get X-Mode and SI-Drive modes, as well as a stop-start function that helps reduce fuel consumption in the city or in heavy traffic. There’s more, in the form of LED headlights, roof rails and a multimedia system with 6.5-inch touchscreen that includes access to Apple CarPlay and Android Auto, the aforementioned Starlink system, all parameters for Bluetooth and satellite radio. 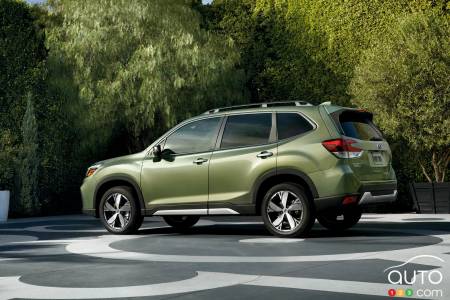 As you climb up the trim levels the list of included equipment gets longer as well. From the Limited version on upwards, your new Forester will include heated rear seats, heated steering wheel, a momeory function for the driver’s seat position, a 9-speaker harmon/kardon audio system and integrated navigation.

The Forester is scheduled to arrive at Canadian dealerships in September. Since its big overhaul last year, it’s still powered by a 2.5L 4-cylinder Boxer engine that delivers 182 hp and 176 lb-ft of torque. The only transmission is a CVT unit, the manual gearbox having disappeared from the product offering just under two years ago.

Obviously, Subaru’s all-wheel-drive system is included in all models, and of course it continues to be a major selling point for the Forester versus its rivals.

Subaru has divulged changes for its 2021 Forester, most of which have to do with more equipment now included standard. Overall, the changes remain minor for ...

The 2020 Subaru Crosstrek is a small crossover that deftly matches the body of a wagon with the "go anywhere" capability of an SUV. Here's our review.

Articles By
Daniel Rufiange
All Current Jaguar Models Likely to Disappear...
Article
Tesla Shuts Down Production at Freemont Plant...
Article
A V8 for the Land Rover Defender in 2022
Article
More from this author