To all those consumers who choose to shop in the compact SUV category – and there are a lot of you – I have to tip my hat. The most popular category among small families is a big one, especially since it's not uncommon for automakers to double up their offerings to ensure they cover all sub-niches and preferences imaginable. Given the wholesale movement in favour of utility models, strategists put a lot of effort into getting their share of this expanding pie.

At Subaru, you could call the brand's vision conservative. For fans of small SUVs, the Japanese manufacturer has the Crosstrek, while the new Ascent is built to meet the needs of those in need of a larger vehicle. Between those two extremes you have the Forester, the dean of the company’s utility-model family – though it will get an argument from the wagon-cum-SUV Outback, which launched back in the 1990s.

I had opportunity to get behind the wheel of a Premier trim (the most expensive) just as Canada prepared to enter its period of confinement in response to the coronavirus outbreak.

My first thought regarding the Forester is that it surely deserves a better fate than it has suffered in terms of sales. But the fact is, Subaru's SUV has to fight against models the makers of which are very aggressive in their strategies. And of course, that’s not to mention the solid-gold reputations of two heavyweight models that lead the pack in the segment: the Honda CR-V and the Toyota RAV4.

A very-familiar silhouette
To sum it up, the Subaru Forester looks like ... a Forester. “Remodeled” last year, the SUV has had a few details tweaked here and there, but the overall impression remains the same. Note that this extreme familiarity is actually a plus in the eyes of the brand's devotees; Subaru counts on the most loyal buyers in the industry.

That said, the 2020 edition does feature a more-mature front bumper, and the Premier trim  also gets a light injection of chrome under the grille and headlights. The Premier's exclusive wheels fill the wheel arches very well, while the rocker panels are dressed in a silver finish that adds a certain robustness to the car.

As for the rear end, the shape of the C-shaped taillights is the most eye-catching feature. Generally speaking, the Forester stands out from the competition with a slightly more adventurous silhouette than, say, the Honda CR-V or the Nissan Rogue.

A cabin, Subaru-style
I had occasion, earlier in 2020, to test drive the Crosstrek, a crossover that shares its dashboard with the Impreza model as well as with the Forester. In fact, for those who may not yet know it, the Subaru Forester has always been built around the same skeleton as the Impreza car.

Unlike the new Legacy and Outback, the Forester's dashboard doesn't feature a large touchscreen, but you’ll still find one in the middle of the central console. The older Forester still comes with a decent display with large icons and even a few shortcut buttons underneath it to simplify navigation through the many applications.

Everyday controls are also well laid out, Subaru’s designers thankfully having avoided the trap of making the climate control buttons touch-sensitive, for example. The steering wheel is also pleasant to hold, although some might find issue with the size of its flange. Nevertheless, the buttons found just about everywhere are also of good size and you quickly get used to their layout. Typical Subaru, after all.

As for the rest of the vehicle, the Forester is generally a larger compact SUV than in the past. Space in the second row is no longer on a par with that of a compact car, and the trunk reaches the 1,000-litre mark - as it should be in this segment. Moreover, visibility out of the model’s big windows are exemplary on board the Forester, which is more than you can say about many of its “sportier” competitors.

Behind the wheel
Unfortunately, last year's redesign has had a slimming effect on the Forester product offering. For one, there’s no more manual transmission available on base models, and the turbocharged XT trim is also gone. Interest in this more-dynamic version was pretty solid here in Canada, but weak sales south of the border doomed the Forester XT in the end.

The Forester does retain its naturally-aspirated 4-cylinder engine, a 2.5L unit that delivers 182 hp and an optimal 176 lb-ft of torque. The continuously variable transmission is the only unit available, while Subaru’s vaunted permanent all-wheel drive system is of course standard on this very versatile vehicle.

Just like the Crosstrek and the Outback, the Forester is very reassuring on the road for its occupants. The rigidity of its chassis and the impression that this is a very well-assembled vehicle contribute much to this. Like other Subaru products, the steering is heavier than average, and I found that the comfort-tuned suspension ensures there's a little more roll in corners that are approached at some velocity. As in the Crosstrek I tried a few weeks ago, I still had to make corrections on the highway, although to be fair I was dealing with some healthy crosswinds.

Of course, there's nothing explosive about the mechanics and the presence of the CVT unit contributes to an increase in decibels during forceful accelerations. Further proof, if you needed it, that the Forester's mission is not the same as that of the company’s WRX.

The SUV must offer reasonable comfort with increased traction without penalizing the owner when it's time to refuel. In that regard, the Forester 2020 still does well with an average of just over 9.0L/100 km. That's great for winter conditions and an average speed on highway of over 100 km/h.

The last word
Like most of us (I hope), the Subaru Forester is definitely more mature in 2020. The quality of finishing is on the rise and the interior space is on a par with the better performers of the category. What's more, side vision is excellent, which isn't always the case with SUVs of this size. Pickier Subaru die-hards surely lament the disappearance of the XT, but to be honest I’d be surprised if the company doesn’t bring it back - especially with the Outback XT wagon in the lineup.

While it's true that the two runaway leaders in the segment – the CR-V and the RAV4 -  are hard to dislodge or even to equal in a head-to-head comparison, the 2020 Subaru Forester really should make it onto the shortlist of anyone in Canada looking to purchase a compact SUV in the near-future, as we inch our way out of confinement.

The efficiency of its AWD
Quality of assembly
Reasonable fuel consumption 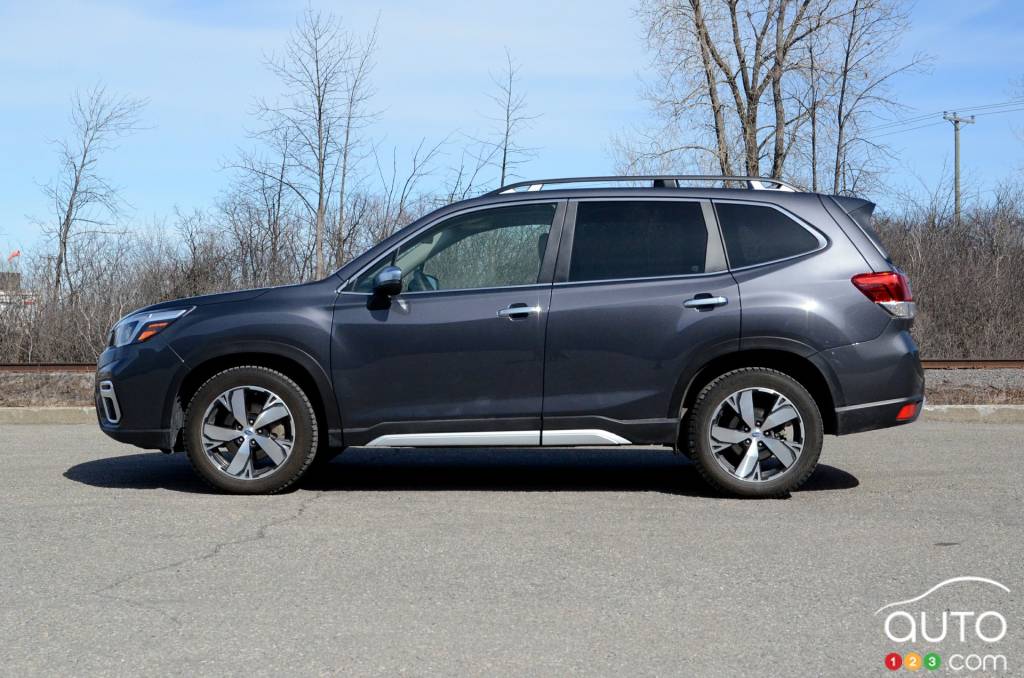 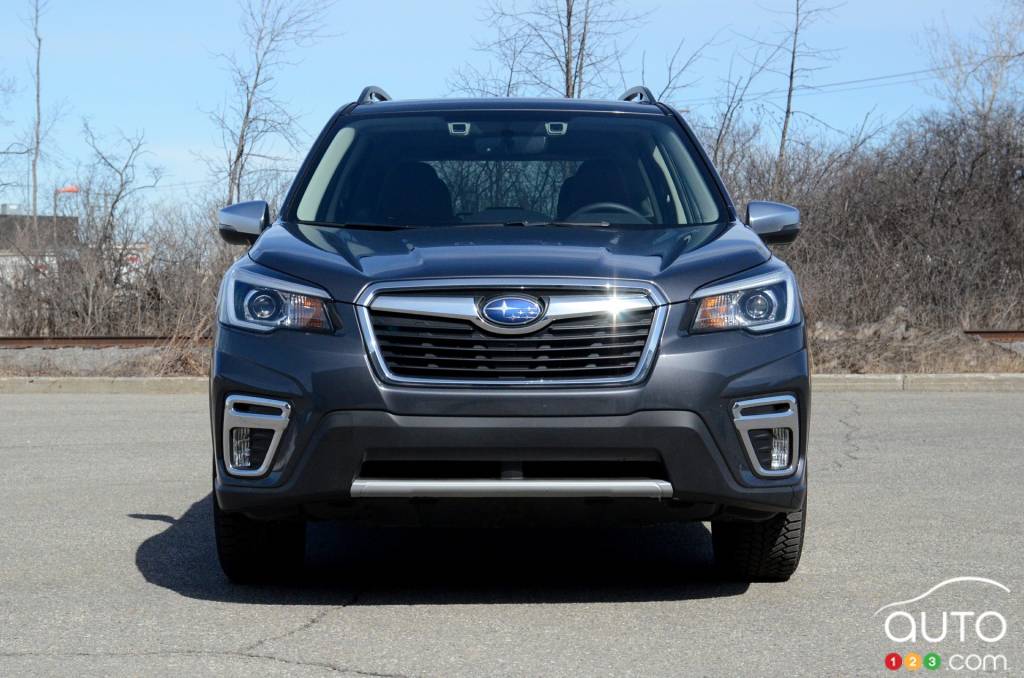 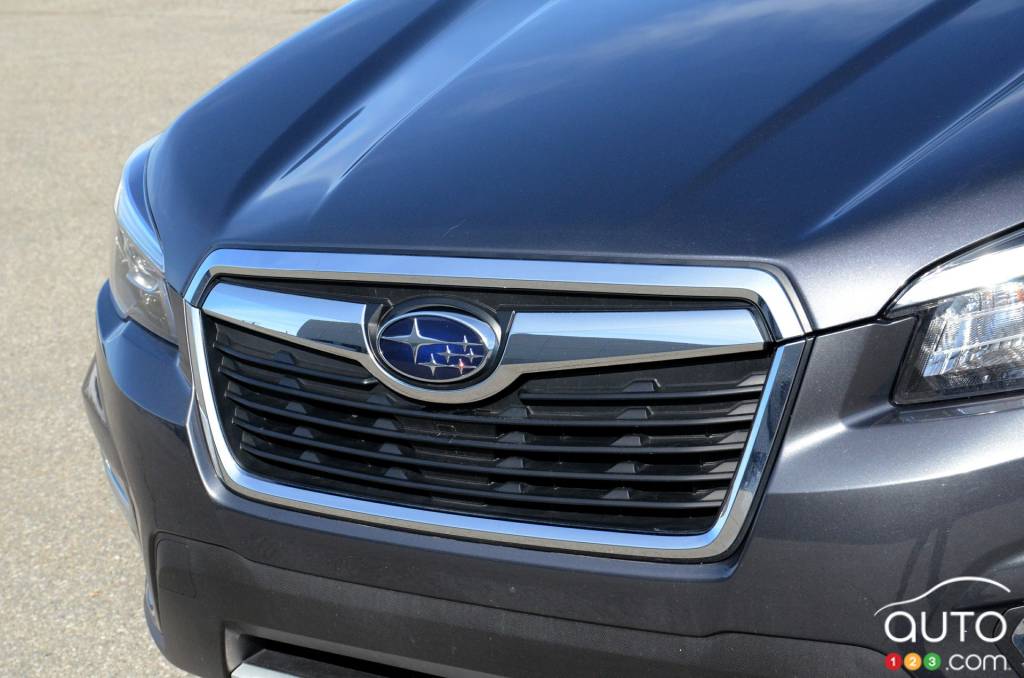 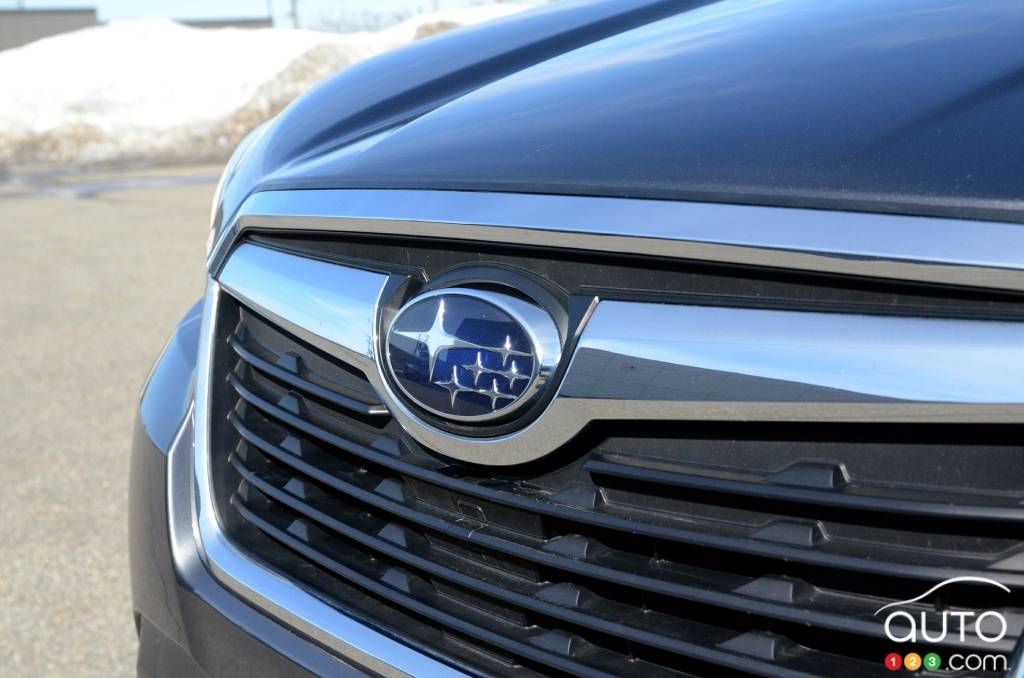