Just a few months ago Honda presented the next-generation Civic was presented, but in concept form. We know that generally, Honda’s prototypes when they are introduced tend to be very close to the eventual production versions. But still, with the new Civic, no one had actually seen the production version yet.

That is, until some images appeared online last week.

The photos were posted on the  CivicXI.com online forum, dedicated of course to the next, 11th generation of the model. The images show a version of the sedan intended for the Chinese market, and we can see that it features the same design as the concept. However, some styling elements have been softened, including the wheels and decorations.

The sight of this model confirms that the new model will offer a much more refined style than the current model. The Civic will first appear in sedan configuration, while hatchback variants, as well as the Si and Type R sports cars, will follow. We already know that the coupe won't be back.

There's still a lot we don’t know about the 2022 Civic, including its powertrains and trim levels. In addition to the leaked images, Honda did recently tease the interior layout with one image, showing an attractive, minimalist dashboard topped by a tablet-style multimedia screen. This new image goes a step further than the sketch previously posted by the automaker. 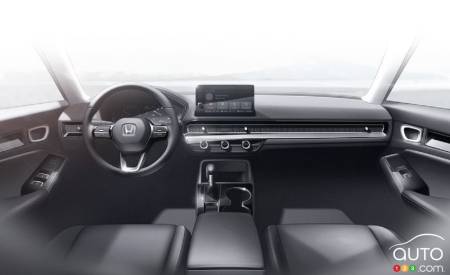 The 2022 Civic is expected to debut in the next few months and go on sale in late spring or early summer. Pricing and details on Canadian models are pending.

Auto123 gets behind the wheel of the 2022 Honda Civic for the first time to a solid, mature car that shows some evolutive growth. That said, it’s not all per...