As the Stanley Cup playoffs head for their climatic conclusion  - and as the Montreal Canadiens vie for their 25th Stanley Cup – the 2022 Honda Civic debuts as it begins its attempt for a 24th title as Canada's best-selling car. If we’re being honest and not total homers, we’d have to say the better odds are with the Honda compact car.

Not that we don’t have faith in the Habs, mind you. Of course we do. Rather it’s that the new Civic we just test drove has all the skills and qualities needed to keep its title. Well, almost all...

Honda didn't take too many risks with the 11th-generation Civic and who can blame them. It did, however, heed some of the criticisms leveled at the outgoing model to make some adjustments. We humbly suggest the automaker does the same with the objections to the new Civic outlined below. Overall, though, it’s clear this is a solid, mature model with a ton of qualities joining the Honda lineup for 2022. 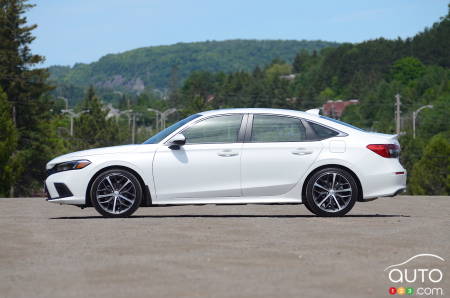 In person
Since last fall, we've actually had a few presentations of the Civic. First, Honda showed the model in concept form, then it rolled out the production version a few months later. And that's not counting the spy shots leaked here and there of a version in testing somewhere on the planet.

The Civic, no matter what anyone says or thinks, is a big deal. It is, after all, one of the top 10 best-selling vehicles in history and its career is far from over; that's no small feat.

In any event, the images making the rounds revealed a 2022 edition with cleaner, simpler lines, ansd so it is when you see the car in the flesh. You can even appreciate some discreet touches here and there, like the signature front headlights and grille. At the rear, the design is much more classic, but on the other hand it’s less polarizing.

Overall, Honda’s goal seems clear: don’t shock. Yet even that conservatism will likely please some and not others. 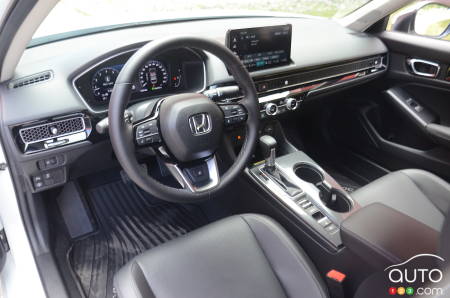 Inside
There’s likely to be more consensus about the interior. Get in and you discover an excellent and easily set driving position. Next is the dashboard, itself also much more of positive than not. I do have to say I’m not crazy about the design – I don’t think I’ll ever become a fan of floating multimedia screens, which look so awkwardly integrated into the overall design. The good news is that the multimedia system behind it has been upgraded. Our contact was too short to give you a fair assessment, but it seems like an interesting step forward.

The same goes for the digital instrument cluster in the Touring version we tested. The information is clear and customizable spaces allow users to display the stuff they want right in front of them.

I can't wait to see what happens with the entry-level models, which will benefit from a more simplified presentation.

Thumbs up for the ventilation nozzles, hidden behind a grid that extends from one end of the dashboard to the other. The effect is pleasant visually and the approach is innovative. Here’s hoping the mesh doesn’t start to fall apart after a few accidental knocks. 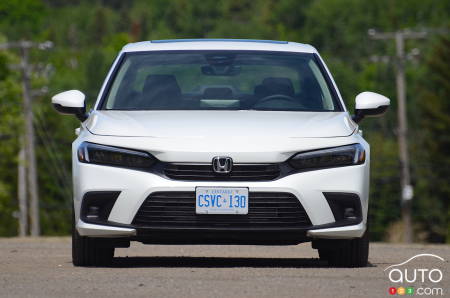 The range
The sedan version of the Civic (the hatchback will be presented on June 23) comes in four flavours: LX, EX, Sport and Touring. With the first three, a valiant warrior lumbers on under the hood, the manufacturer's 2.0L 4-cylinder. Its power is unchanged at 158 hp and 138 lb-ft of torque. Frankly, this powertrain is nothing to get excited about, or disappointed about.

With the Touring model, we find the 1.5L turbo 4-cylinder. This time, we're talking about 180 hp and 177 lb-ft of torque, a gain of 6 horses and 15 lb-ft over what the sedan got last year. And with the sedan, only a continuously variable transmission (CVT) is used in combo with the two engines, which is a heresy to us. Yes, the hatchback can still be had with the manual, but still...

Across the range, the Honda Sensing safety suite protects with its safety features and annoys at times with overactive interventions. 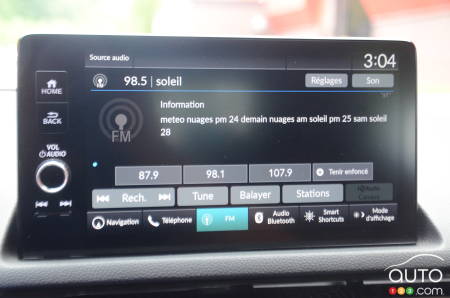 At the wheel
Once you've analyzed the styling, the interior and the equipment, what counts with a Civic is what happens when you get behind the wheel. It must be said that the bar was set very high with the previous generation. We don't get the same kind of big step forward here, but therE’s no regression either. My impression is that the new Civic delivers an improved balance. The increased stiffness so many carmakers are wont to brag about these days is perceptible... but only slightly.

The comfort is there and the soundproofing is very good. You almost forget about the CVT. What's a bit ironic is that the first reflex is not to push this Civic; you appreciate its comfort, its amenities, etc. Kind of like an Accord. This is a bit confusing, considering how this car, even in its basic configuration, has always been perceived as a small "sporty" car.

Its "new" vocation is confirmed when you push it a bit. Its chassis reacts very well, but it’s limited by tires that don't keep up with the pace. It's as if Honda was reserving the sporty vocation of its model for future variants, whether it's the 5-door or the Si and Type R variants. In the latter two cases, the mission is clear.

All in all, the Civic doesn't disappoint; it just doesn't surprise as much as it used to. 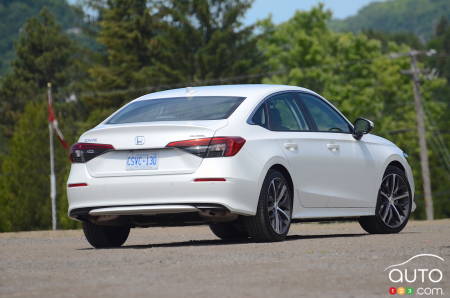 Conclusion
Is the new Civic still a good buy? Of course, but one disappointment remains. Ten years ago, you could get your hands on a base version with a manual transmission for $15,000. Today, the manual transmission is no longer available and the bill is at least $25,000.

That's a shame. The new Civic has evolved nicely and has all the qualities needed to remain the most popular car in its class, but what has always helped it sell is its accessibility. But the car is more expensive than ever.

Note that carmakers are selling mostly monthly payment plans now, and the Civic’s resale value remains excellent. We'll see what the consumer response to the new edition is.

Base price at $25,000
No manual transmission with the sedan
Tires that don't follow the chassis 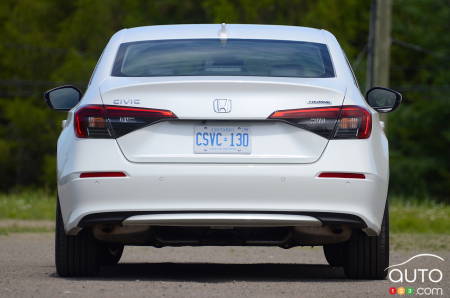 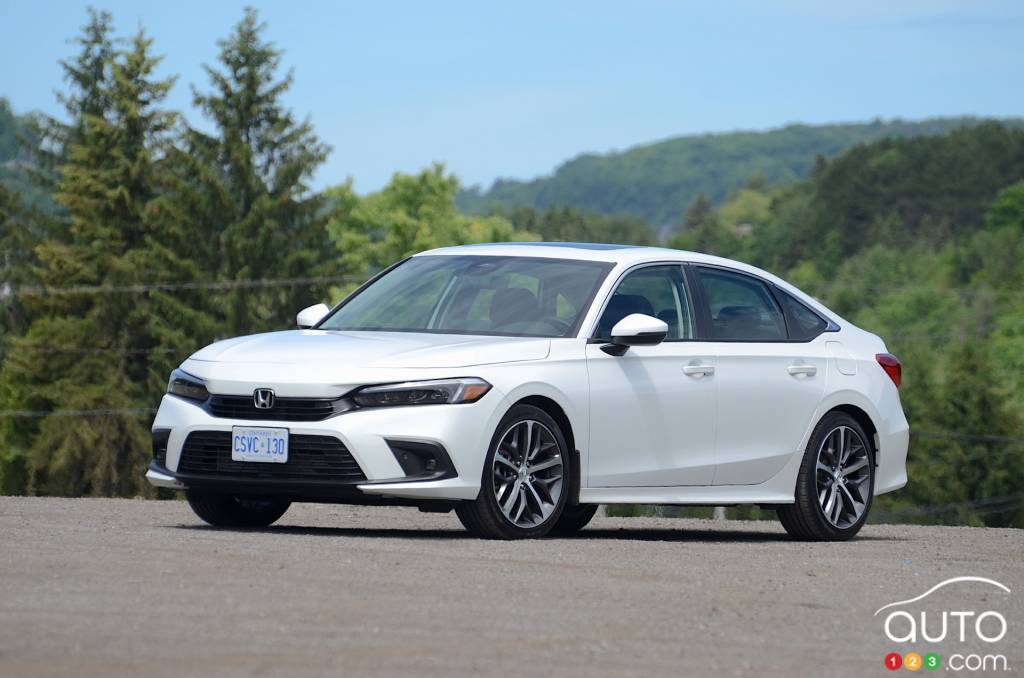 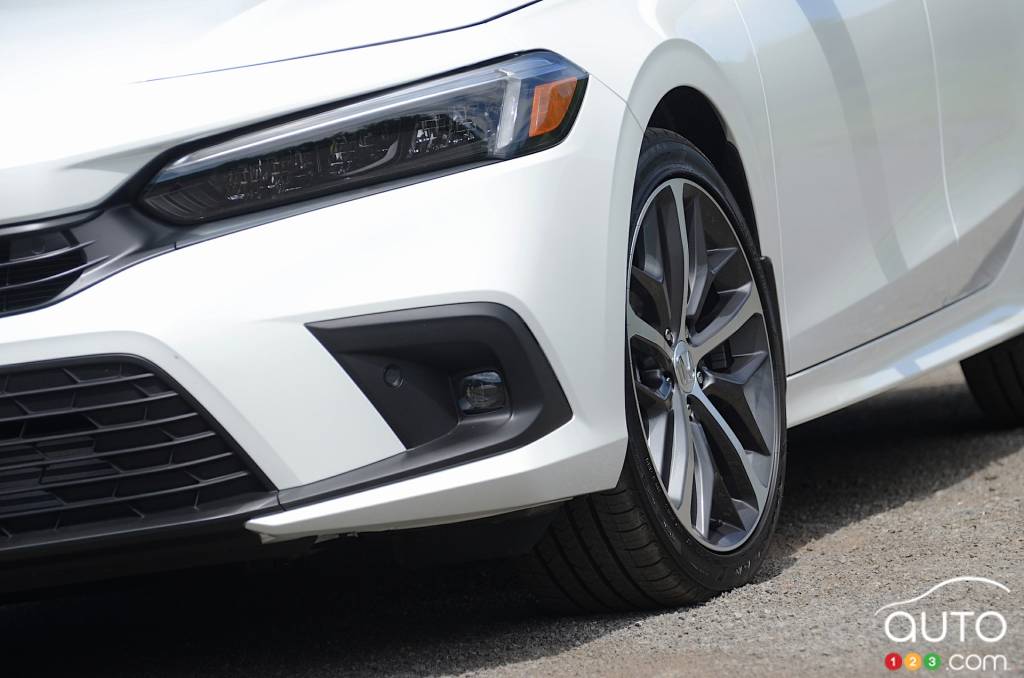 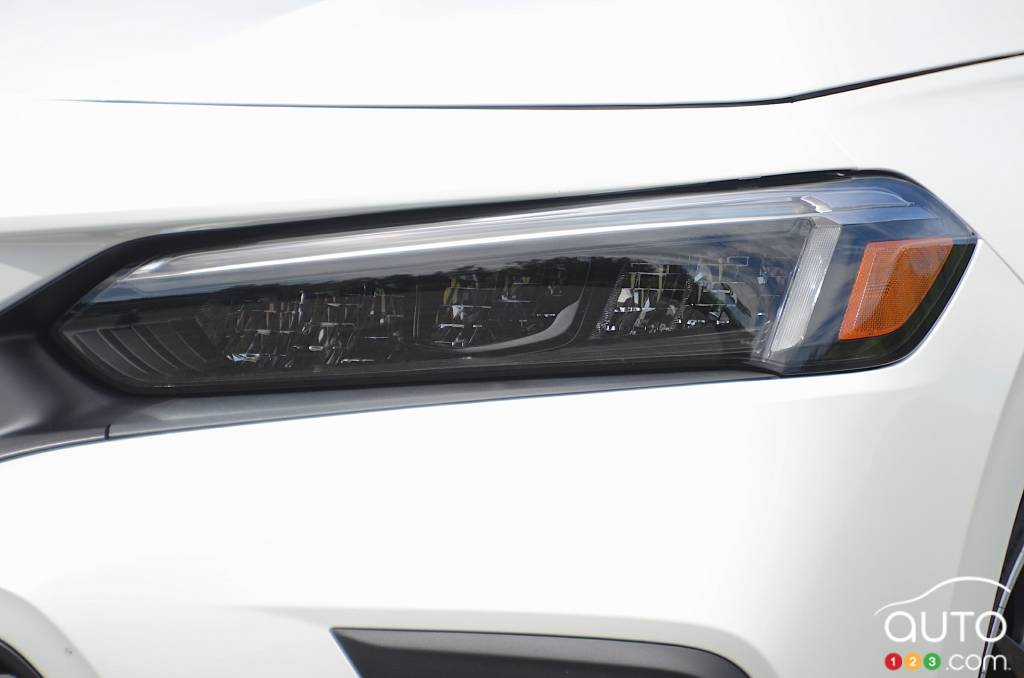 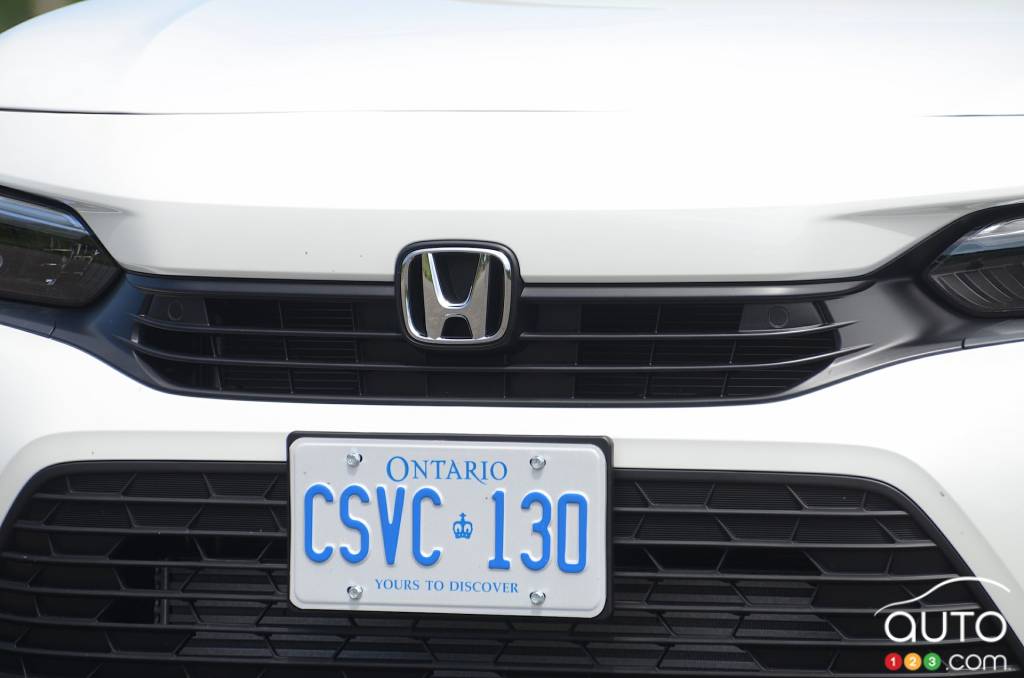 The 2022 Honda Civic gets a facelift with a redesigned body, improved mechanics and more-sophisticated features and systems. It's sure to be a hit with Canad...

The 2022 Honda Civic Hatchback Gets its Turn In the Spotl...

Honda has unveiled the hatchback version of its 2022 Civic. While the presentation included no big surprises, we did learn that the model will receive two en...