So far, 2022 has been a year of renewal for Honda’s SUVs. Indeed, this spring the Japanese automaker unveiled the 2023 edition of its HR-V pocket-sized crossover, already available in dealerships across the country. More recently, Honda also unveiled a new version of its very popular - and top-selling - compact crossover, the 2023 Honda CR-V. Which will be offered in hybrid configuration in Canads for the first time, by the way.

The Passport, Ridgeline and Odyssey being fresher, we won’t expect anything in terms of renewals of those models in the immediate future. That leaves the Pilot three-row SUV, now in its seventh year in its current form. That qualifies as an eternity in this segment, or in most segments for that matter. Sure enough, prototypes of the future model have already been spotted in North American on-road testing. It’s a sign that doesn't lie: Honda is indeed preparing the next Pilot.

While waiting for this well-deserved redesign, I test-drove the outgoing model one last time to determine if the biggest SUV in the Honda lineup is still up to facing down its rivals, several of which have been revamped at least somewhat in the last year or two. 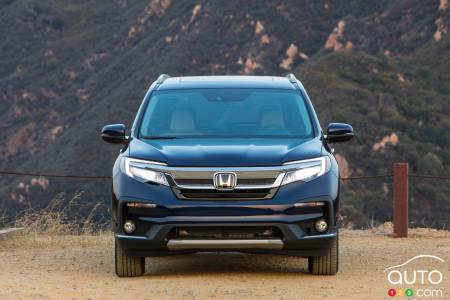 There’s discreet, and there’s anonymous
The looks of a big SUV like the Honda Pilot probably don’t matter as much to owners as do those of vehicles in some other segments. But still, across the category, designers are putting effort into distinguishing their product from others in the shelf. In that sense, let's just say the Pilot is closer to a no-brand box of whatever than a flashy, look-at-me package.

There’s another edge to that sword, of course. The Pilot may be more discreet than its rivals, but its less showy design is likely to age better over time. Let's give credit where credit is due: the Pilot was partially redesigned for 2019, and we have to admit the changes, made mainly to the front end of the vehicle, are tasteful, with a more assertive chrome grille and a bumper with openings designed to cool the front brakes.

Standing on 20-inch wheels, the Pilot almost looks like a bloated CR-V - the old one, not the new one (!) - from some angles. As for the rear end, it needs a makeover. We'll see what's in store for the next generation of the vehicle, but if we go by the CR-V's changes, Honda plans something a little more assertive.

Room to spare
Where the Pilot shines is in terms of roominess. Particularly in the first two rows, the occupants of which enjoy a comfortable ride, with plenty of room down low thanks to the flat floor and generous shoulder and headroom. Our Touring tester was equipped with the middle second-row seat, giving it an extra seat for a total of eight.

Let's also congratulate Honda's designers for coming up with a very simple system to move the sections of this bench forward or backward for access to the third bench - which, not surprisingly, is more limited in terms of space.

The trunk isn't very large with the third-row seat in place. However, when the third-row seat is folded into the floor, the amount of space available turns quite impressive. The plastic panel that covers the floor is a solution increasingly used in the industry to keep the cargo area floor cleaner.

A very sober environment
Up front, the Pilot's designers didn't try to impress with the dashboard, which is very unlikely to win any design awards.  It’s downright plain... maybe too plain for some! On the other hand, it's very easy to find your way around with good-sized and relatively well-organized buttons and controls.

While the quality of the materials and assembly is hard to fault, the same can’t be said for the infotainment system; the Pilot’s aging system doesn't offer graphics near as impressive as those in the new Civic, for example. The touchscreen was sometimes unresponsive, while some of the menus can be difficult to understand.

In short, there’s work to be done to improve this aspect. The next generation of the vehicle will surely be more modern.

There are bouquets to go with the brickbats, of course. There's the availability of Apple CarPlay and Android Auto, which makes it easier to access apps installed on your smart device, and this Touring trim comes standard with wireless charging. As for that disc player housed between the controls for the heated and ventilated seats, it's primarily for the entertainment of rear passengers who can also listen in on their movie via the wireless headphones that come with the Pilot.