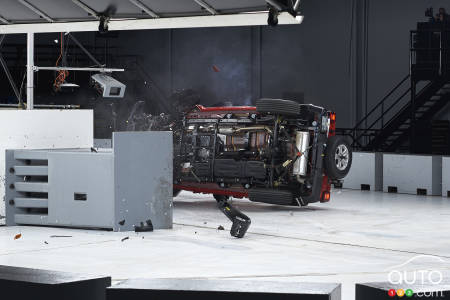 Photo: IIHS
The Jeep Wrangler Unlimited after the collision

U.S. agency Insurance Institute for Highway Safety (IIHS) puts a significant number of vehicles through its crash tests each year, which helps determine which models are the safest on the market.

Over the years, the tests have been refined to reflect different situations that motorists may encounter. The IIHS’s well-earned reputation for rigour in the way it evaluates vehicles has forced manufacturers to offer products that are safer and safer during impacts.

This is all excellent. And it’s shining a not-so-flattering light on the Jeep Wrangler, which is having a devil of a time with the agency’s small overlap crash test in particular. Basically, in that test, only 25 percent of the front of the vehicle comes into contact with an obstacle, causing it to rotate on itself. 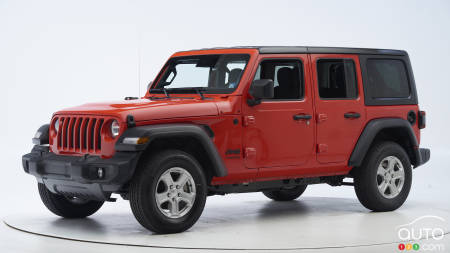 The Jeep Wrangler’s reaction to this type of collision is cause for concern, evidently. In 2019, when the new generation model was subjected to the impact, it ended up on its side. Recently, the IIHS put a 2022 model through the same test and the result was very similar. Which tells us no substantial improvements have been made by the manufacturer.

Tested vehicles can receive four ratings from the IIHS: Good, Acceptable, Marginal and Poor. The Wrangler earned a Marginal rating prevails in this test.

There was actually some communication between the IIHS and Jeep after the tests two years ago. When the Wrangler rolled over the first time, FCA (Fiat-Chrysler Automobiles at the time) wondered if the result was related to the method IIHS engineers were using to attach the vehicle to the system that creates the crash. A second test was then carried out, in approval with FCA, with the same result. The company defended itself by citing the vehicle's production figures, the number of kilometers traveled by its users and the fact that it had no information indicating that this type of problem was common in the event of a collision.

The IIHS website does show that the 2022 Wrangler Unlimited scores well on the moderate frontal overlap test, which puts about half of the front of the vehicle into an impact situation at about 65 mph. The Wrangler also scores well on the roof, head restraints and seat strength test. In the side impact test, it rates a Marginal score, another misstep. 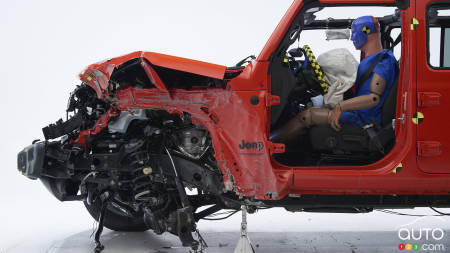 Around the world, the Wrangler's crash test results are mixed, which tells us that there’s still work to be done with this vehicle on the safety front.

And on the road, not to say we could have guessed the results of the IIHS test ahead of time, but let's just say there's less stability due to the vehicle's size and configuration. As much as it's fun to drive, it can be a potential rollover hazard due to its styling, high ground clearance, tires, etc.

The IIHS tests confirm this. It remains to be seen what Jeep intends to do about it now.

The Insurance Institute for Highway Safety (IIHS) has named its 2022 Top Safety Pick and Top Safety Pick+ award winners. Auto123 takes a peek at what the U.S...

Front-seat passengers in the 2022 Jeep Grand Cherokee can watch movies (via Netflix) and play games (on Xbox) on their screen. To many who hear this, this im...