Last month, Kia introduced the fourth-generation model of its Sedona minivan, known as the Carnival in South Korea, where it will make its debut later this year.

Now, Kia has given us a glimpse of the futuristic interior we can expect when the model we’ll know as the 2022 Sedona arrives in North America.

The highlight is without a doubt the dashboard, Kia having adopted the formula perfected by Mercedes-Benz. Thus we see a massive rectangular screen actually consisting of two 12.3-inch screens, one for the digital instrument cluster, the other for the multimedia system. A horizontal strip across the width of the dashboard separates the upper and lower areas, and the air vents are discreetly concealed in this dividing element. In the lower section, we see the controls for the audio system and climate control, as well as a small screen with information about the latter system.

The console features a thumbwheel for gear selection, which helps streamline the layout. More upscale materials are arranged throughout the cabin, Kia promises. Second-row passengers benefit from new USB ports on the front-row seatbacks, storage nets for electronic devices and a storage drawer at the base of the rear console.

Further details about the equipment and features of the model will be divulged when it gets its official premiere.

The Carnival model is scheduled to make its debut in South Korea in the third quarter of this year, and then launch on the world market. 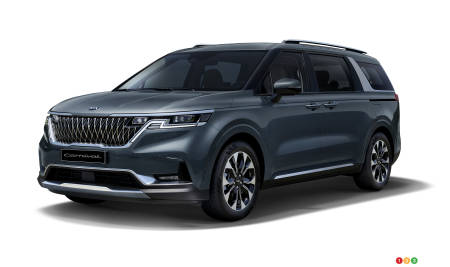 The Kia Sedona 2022 has been officially introduced in Korea and will make its debut shortly. Known as the Carnival there, it's being introduced as a 2021 mod...

Kia has presented the first images of its next-generation Sedona minivan. The 2022 Sedona is scheduled to make its debut in South Korea in the coming weeks (...