Auto123 reviews the 2022 Toyota Tundra, in the first of several test drives we’re carrying out of the revised pickup. In the coming weeks, we’ll have for you our long-distance drive review of the new Tundra, which we took all the way to the Arctic Circle in northern Canada, as well as a first drive review of the 2022 Tundra Hybrid.

After what seems like a span of years running longer than that of the Maple Leafs’ last Stanley Cup win (or playoff series win), the Toyota Tundra pickup has been fully redesigned for 2022.

There’s new styling, all sorts of new interior tech, and most important of all, the iForce V8 engine that’s powered these babies since the beginning is gone, replaced by a 3.5L twin-turbo V6 with a hybrid option.

On the styling front, it’s not hard to see the changes. Everything that they could change, they have. The headlight lenses are more aggressive than ever (and more aggressive than most of the competition), the blacked-out grille is a behemoth and the overall lines have been chiseled at, providing visible fender flares, super blocky bumpers and muscular hood. It looks every inch the modern truck, even if some of the curves are hidden by the dark Army Green paint job seen here. Inside, my TRD Off Road-spec vehicle – that’s a $6,000 option package that adds a heated steering wheel, heavy-duty hitch receiver, blind spot monitor and a few other bits and bobs – is a surprisingly sporting affair. The switch to TRD can be readily seen inside, with the logo appearing on the chunky steering wheel (which also gets a very race car-esque centering red centering band) and shift lever, the stubbiness of which makes it seem like it would be at home in a smaller vehicle. I was pleasantly surprised, actually, by how prominent all this TRD-ness is.

It's contrasted, of course, by the blocky and flared surfaces you’d expect from a truck like this. The drive mode select knob, transfer case switch, HVAC vent shapes, gauge cluster surround hood – all ultra chunky, built to last. When you think about it, it all makes sense. While it may be the bigger truck, the Tundra actually sits in the shadow of its smaller, very popular Tacoma sibling. It’s clear that much attention has been paid to transferring some of the Tacoma’s stylistic vibe to the larger truck, both in terms of interior and exterior styling.

On the other hand, the Tundra takes the Tacoma – and most other Toyotas – to the cleaners when it comes to interior tech. That’s because it gets the latest version of Toyota’s infotainment tech that provides a sharper display, is more responsive to touch inputs and just looks better in general. My truck had the standard 8-inch display (a 14-incher can be optioned as well), while all models get a 4.2-inch TFT display between the gauges. You will have to upgrade to Limited spec if you want wireless charging. There is a slightly angled but flat surface that makes for a pretty good smartphone spot, though smaller devices may slide around a little. For those who spend time with work gloves on and don’t like the idea of an all-touch display, not to worry: there’s a traditional volume knob and a host of traditional “hard” buttons and toggles below the central display for all your seat heating and climate needs. Below that, we find big buttons for your locking differential, hazards and traction control system. It’s all so big and accessible that even someone in a Hurt Locker-style suit and gloves could operate the controls.

When it comes to cabin space, the front seat feels like you’re sitting in a massive space. The seats are well-padded (and finished in cloth here) and while they won’t support your ribs like sports sedan seats, there’s enough support and adjustability here to keep you comfortable, even on longer drives.

The rear seat on my particular truck is the smaller of the two available options, my truck being of the Double Cab variety as opposed to the full-sized CrewMax that serves as your only other choice. So, rear seat legroom is at a premium. This is not the kind of cab you want to transport your crew around in.

Better you flip the bottom cushion up and use the area for storage – but that’s not a perfect solution, either, in that we don’t have a flat load floor here. There is transmission tunnel intrusion and coupled with the fixed underseat storage bins, there’s precious little floor space for your gear. The SR trim that my tester starts life as can be had with two bed lengths: a 6.5-foot number as seen here, and an 8-foot option as well. I like how the shorter bed length adds some agility to the Tundra, but coupled with the smaller cabin and its less-useful floor, this is not the spec to opt for if you’re looking to make your Tundra work.

Having said that, all beds are built using a mix of aluminum and composite materials for a lightweight and strong affair, and can be had with a power tailgate you can flip down via a button mounted into the left rear taillight for ease of access. A power tailgate step also comes included.

My tester? Well, its tailgate and box are pretty basic. No trick release, no bed access aid of any kind. The bed itself is also pretty basic with no power outlets, supplemental lights or storage bins of any kind, just a couple of tie-downs and some adjustable cleats. Could have used a little more content in this regard, but of course no lights or trick power tailgate release does mean there’s less that will brake. In this spec, however, it will tow over 5,000 kg and haul 800 kg, making it the most capable 4x4 in the lineup. TRD Off Road spec also adds specially-tuned Bilstein monotube shocks that have been tuned to keep things as copasetic as possible off-road, and as comfortable as possible on-road.

While we didn’t have the opportunity to do any heavy off-roading, the light trail work we did do turned in an impressive response from the chassis, helped along by the multi-terrain system that provides deep snow, mud, sand and dirt modes. Dirt mode was all I needed for this work, but even in this scenario, you really get the sense that the Tundra is at ease, willing to conquer most anything you throw its way.

Back on the road, meanwhile, the Tundra also shines. Even with all that extra off-road suspension, body control over undulations and bumps and berms is very impressive. The Ram 1500 probably returns the best ride in this segment, but this latest Tundra is the closest I’ve come to the way that truck feels, and I’ve sampled them all. I think most impressive is how even when unladen, the rear end is kept well in check with some very good rebound tuning to ensure you don’t get the telltale bob you get from an empty pickup bed. Couple that with the comfortable (and heated!) front seats and dual-zone climate control – not to mention the generous space up front – and you find yourself in a very calm and relaxing environment.

Power from the twin-turbo V6 is rated at 389 hp (except for SR grades, which come with a detuned 348 hp engine) and 405 lb-ft of torque, figures that are up on what’s made by an F-150 with the popular 2.7L EcoBoost engine option. If you opt for the hybrid powertrain, meanwhile, you’re up to 437 hp and a frankly startling 583 lb-ft.

Even with the less powerful engine I had, however, forward progress is deep-chested and brisk – more so if you happen to have the powertrain in Sport mode, which is joined by Eco and Normal modes. The 10-speed automatic works well in concert with the motor and if you want to get a little more “involved”, simply bump that big t-shaped gear lever to the left and start rowing those gears yourself. It’s been a long time coming, this third-gen Tundra and it’s a clear case of good things come to those who wait. The great ride, awesome capability, modern looks and powerful yet frugal V6 engine – not to mention the hybrid – have all combined to make an almost fully complete package. The spartan bed and bumpy cabin floor are definite demerits here, but this latest Tundra has emerged a tidy, taut and very functional affair.

Styling, both inside and out
Great ride
Very capable 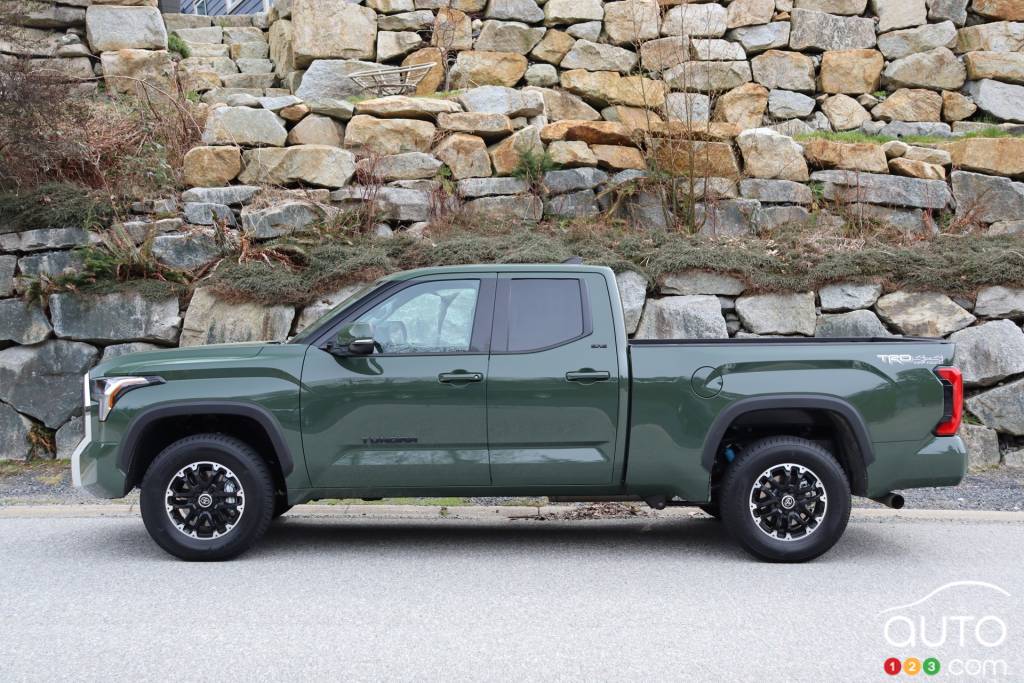 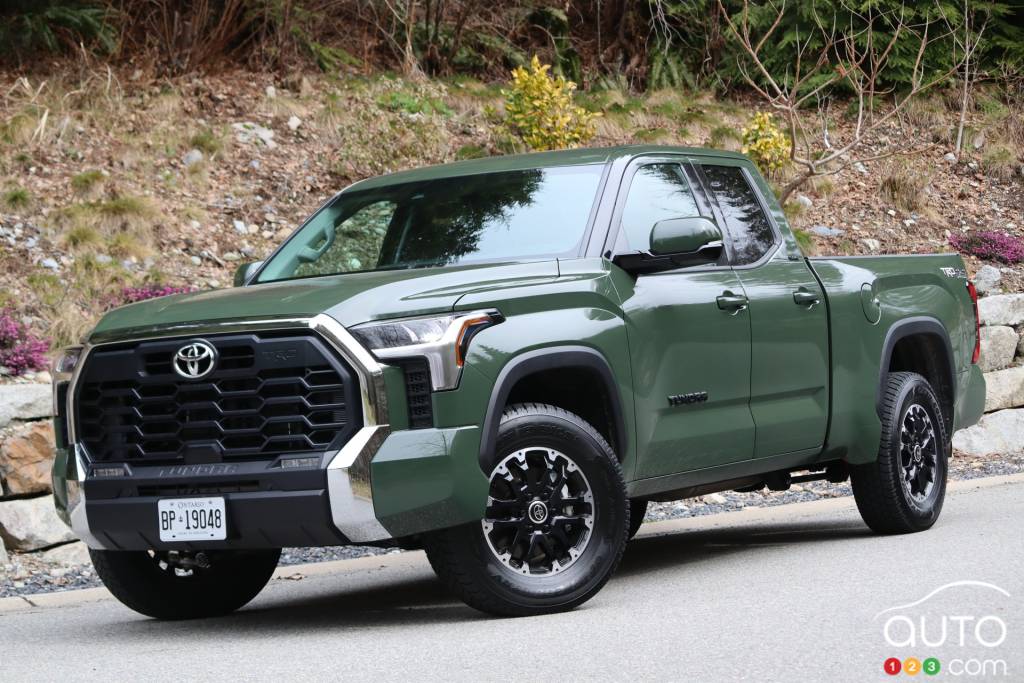 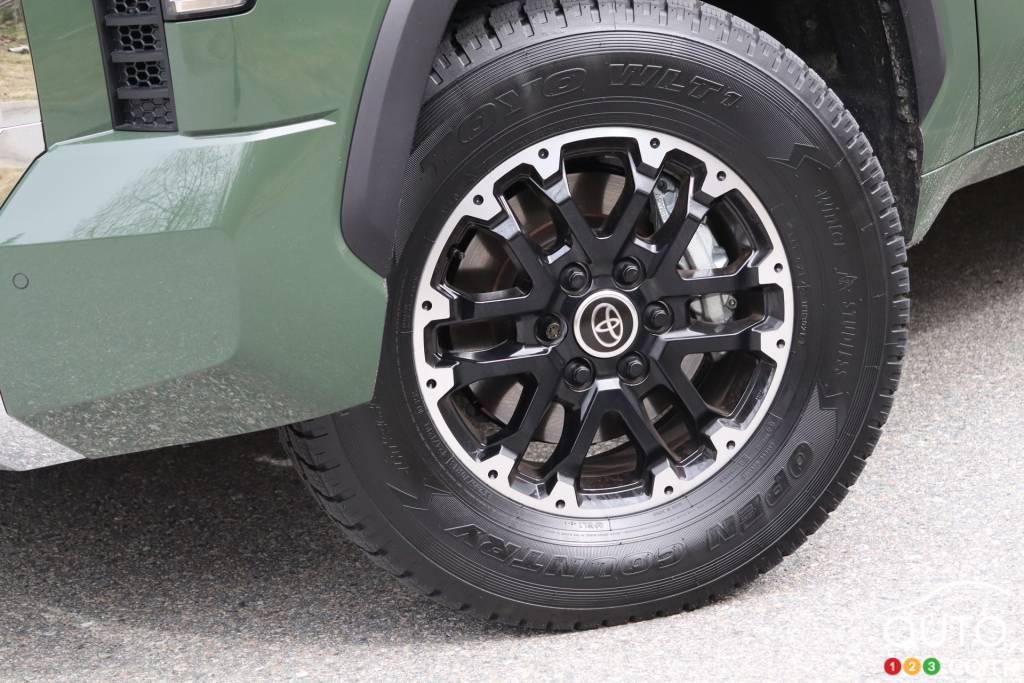 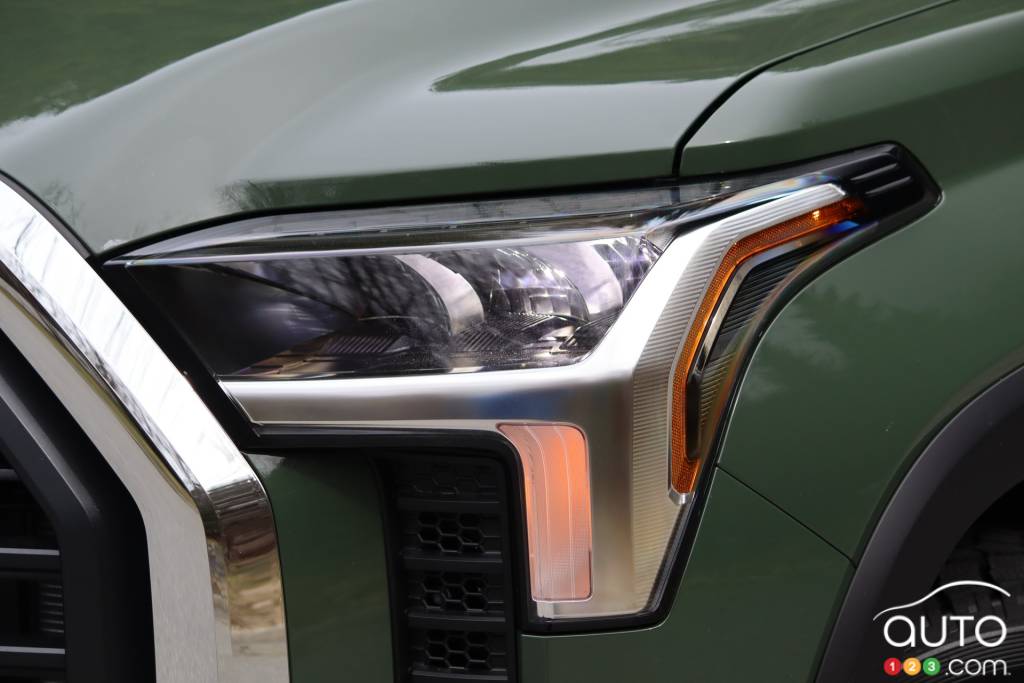 Toyota is recalling just over 18,000 new 2022 Tundra trucks due to a problem with the backup camera. The camera may stop transmitting certain images in cold ...