The truck's redesign was overdue and is welcome, but incomplete Automotive columnist: Vincent Aubé , Updated: 2022-10-19 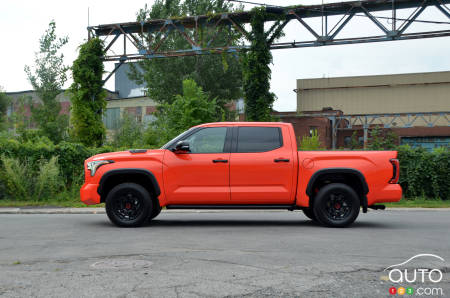 •    The Japanese pickup finally received a proper redesign for 2022.

•    The TRD Pro combines off-road capabilities with a hybrid powertrain.

•    American pickup trucks are still the kings of the castle, though. The challenge for the Tundra is immense.

After eight years on the market without much change, the Toyota Tundra finally got a proper redesign for the 2022 model year. It’s more than welcome, that, but the fact remains that the Tundra is still the black sheep of the full-size pickup truck segment. The Japanese truck has to deal with the impenetrable hegemony of the Big Three.

Indeed Ford, GM and Ram continue to rule the roast and continue to work very to keep or poach buyers that make up this very large customer base. In fact, it’s all too easy to understand Nissan’s withdrawal of its Titan truck from the Canadian market. It too was struggling to keep up with the big guys.

Be that as it may, the Tundra is all shiny and new for ‘22. The vehicle is even available with a hybrid powertrain, and that is what came in the orange monster with the TRD Pro badge that I test drove. Here's what I learned from my first contact with the most dynamic Tundra in the range 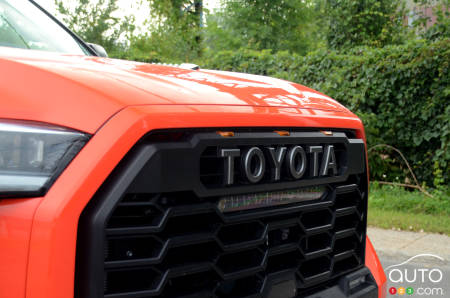 Toyota at its best
I gotta say, the Tundra TRD Pro attracted a lot of attention during my week-long test drive, first because of its very visible colouring, but also because TRD Pro models are often the envy of off-road enthusiasts.

It's also true that the grille with the letters T-O-Y-O-T-A is smartly nostalgic, while the beautiful matte black BBS wheels are a perfect match. The embossed tailgate with the "TRD Pro" inscription is also an interesting detail on the pickup's exterior.

But beyond the look-at-me appearance, it's the interior that pickup lovers will appreciate - or not – in this Tundra. This holds whether those folks will be carrying out demanding jobs or simply or hauling the kids around on a daily basis – or alternating between the two.

Because yes, full-size crew-cab trucks like my tester can easily play the role of family vehicle, given all the room in the cab and the huge bed in the back. Especially if that bed is covered with a tarp or fiberglass box. 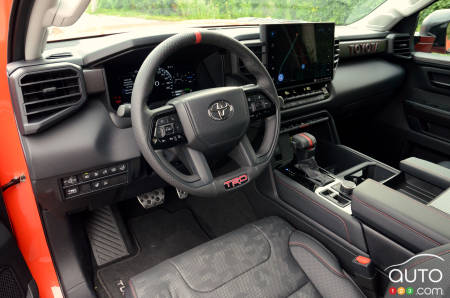 The interior
Unsurprisingly, the quality of the interior is similar to that of most Toyota vehicles, meaning it’s good. The plastics that line the cabin are beautifully crafted, as is the leather that covers the steering wheel and the gearshift knob.

The seats are made of SofTex leatherette that mimics the geometric graphics on the outside of the fenders. The seats are very comfortable in the first row and a little less so in the back, at least if I go by what the kids were telling me.

There's no shortage of storage space in the Tundra, in the door panels, the centre console and under the rear seat. Except that under that back seat, the space that's normally used to store slightly bigger items - like a telescopic snowbrush, for example - is eaten into by the battery pack for the hybrid system. What's more, the Tundra's second-row floor has that hump in the middle because of the driveshaft. 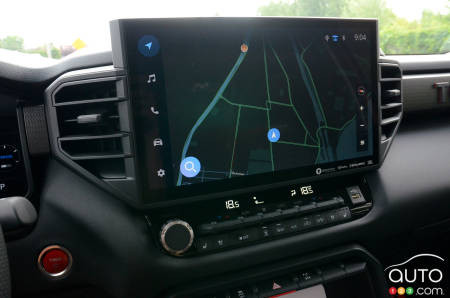 The dashboard is new in every respect. However, the ergonomics are typically Toyota. The more technical buttons are on the left side - they're a bit low, by the way - and the controls for off-road driving and air conditioning are located under the new touch screen.

This screen is much nicer than in the past, with graphics worthy of a Lexus. It's also easy to find your way around the multifunction steering wheel... after a few days of use of course. Thanks also to the designers for having installed this large knob for the volume of the audio system.

The upshot with this cabin is that it's pretty well designed and built, with the one caveat that it lacks storage space under the back seat. That's the price to pay for hybrid technology. 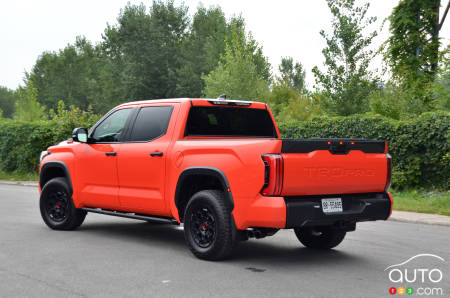 Behind the wheel of a brute
With 437 hp and an even more impressive 583 lb-ft of torque on offer, the Tundra TRD Pro delivers a big punch. You can feel the contribution of the motor-generator placed between the new 3.5L twin-turbo V6 and the 10-speed automatic transmission during stop-and-go city driving. For a split-second, the truck will launch itself in electric mode before the engine kicks in.

Don’t ask me to compare the driving experience of the new Tundra with that of the GR Supra, say. The two vehicles have absolutely nothing in common except for the badge on the front. But the new version is more fun than its predecessor, especially with the raging sound of the exhaust system. Some may find the rumble a bit too expressive, but a lot of us like it, and aggressive work on the accelerator brought delighted giggles from the younger back-row occupants during my week.

The softer suspension is also a blessing on Canada’s demanding roads, while the fairly heavy steering allows for a bit of dynamic driving. Even at (slightly)-extra-legal speeds, the TRD Pro was very reassuring. 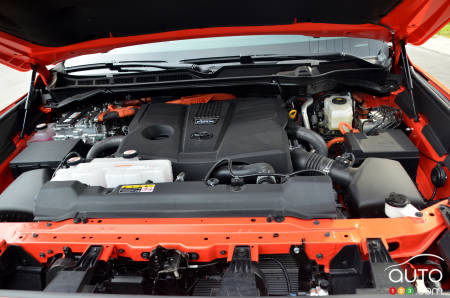 The purpose of hybridity
Sure, Toyota’s engineers had in mind to reduce the truck's fuel consumption. But the primary mission of this hybrid powertrain is to improve performance, and the accelerations and highway passing performance of the truck confirms this.

The 10-speed automatic transmission also works very well; aside from one or two "jerks" during my week with the truck, the unit never flinched.

At the time of writing, I have yet to drive a less expensive version of the 2022 Tundra, so it was impossible to know if the regular truck is as comfortable as the TRD Pro variant. On the other hand, this version did pretty well with its "off-road" adjustments up front. I wouldn't go so far as to say things are as cozy as in an F-150 Raptor, however. The American pickup is the winner in this respect.

The suspension isn't as bouncy as some pickup trucks with leaf spring suspension in the back - the Tundra loses that arrangement for a five-link suspension. And the presence of off-road tires mounted on 18-inch wheels – instead of 20-inch wheels – also limits discomfort on bumpy road surfaces.

When the engine isn't overly taxed, the cabin is relatively quiet, but when the right foot hits the floor, the sound of the exhaust system reminds you you’re sitting in a big toy that's capable of prowess away from the beaten path. 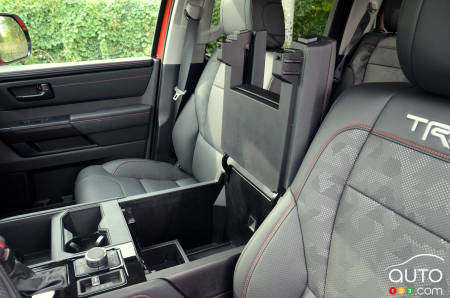 When the engine isn't overly taxed, the cabin is relatively quiet, but when the right foot hits the floor, the sound of the exhaust system reminds you you’re sitting in a big toy that's capable of prowess away from the beaten path.

What about fuel economy?
Toyota doesn't even hide the fact that the hybrid system is mainly used to boost performance. That's why during my time with the vehicle, which included 110 km/h highway cruising with peaks of 119 km/h as well as city driving, I averaged 15.4L/100 km, more than 3.0L/100 km above the EnerGuide Canada average.

Is the addictive rumble of the pickup to blame? Possibly, but it's also worth considering that I tried all three driving modes (Eco, Normal and Sport) at different times. Extensive use of Eco mode would certainly have helped, but then again, truck buyers know full-size pickups use more gas than cheap compact cars. I can't imagine, by the way, what the average fuel consumption would be with a trailer hooked up behind.

The final word
Will Toyota poach customers from other pickups on the market with it revised Tundra? Probably not many, but you never know. The 2022 Tundra is improved with its new twin-turbocharged V6 and hybrid option, and overall quality is high. In fact, if this truck was wearing an American badge in the centre of its grille, sales figures would be far higher, no doubt.

But it doesn’t, so the order of things is going to stay the same for a while. The full-size pickup category will continue to be dominated by the Big Three. But, the transition to electric could well change the game, and that's where there may come an opening for Toyota. It will have to be ready to convince consumers who aren't already familiar with American trucks. 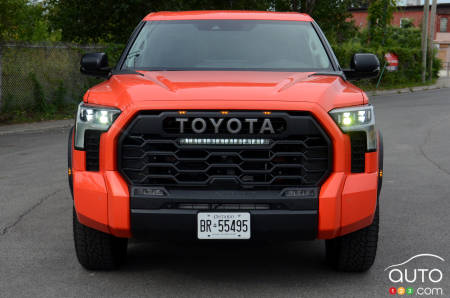 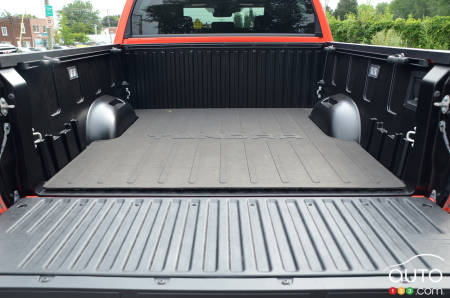 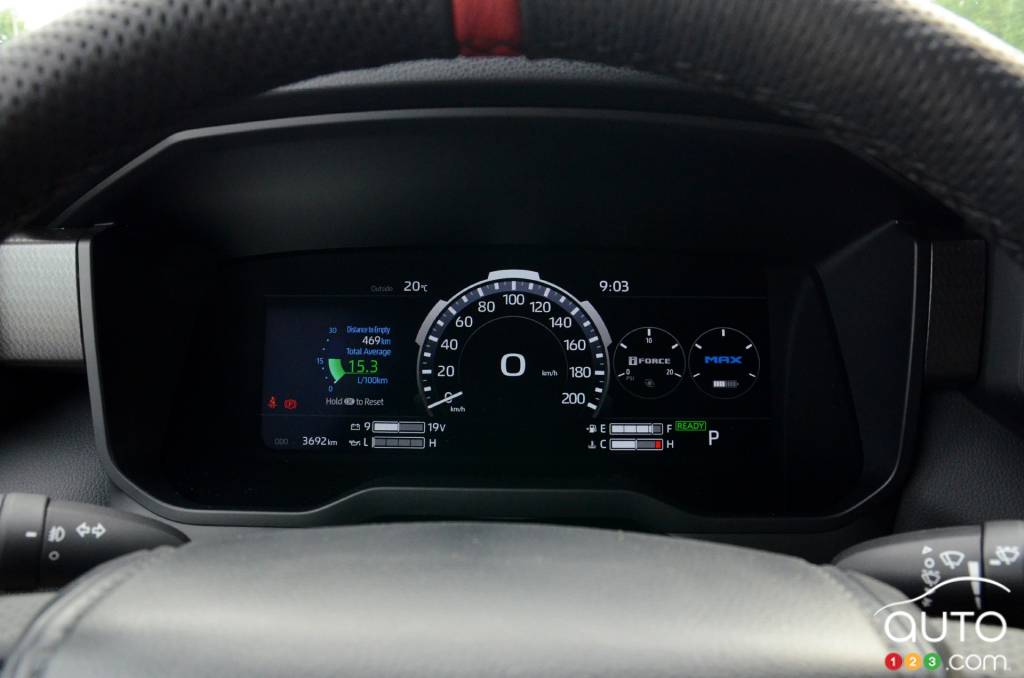 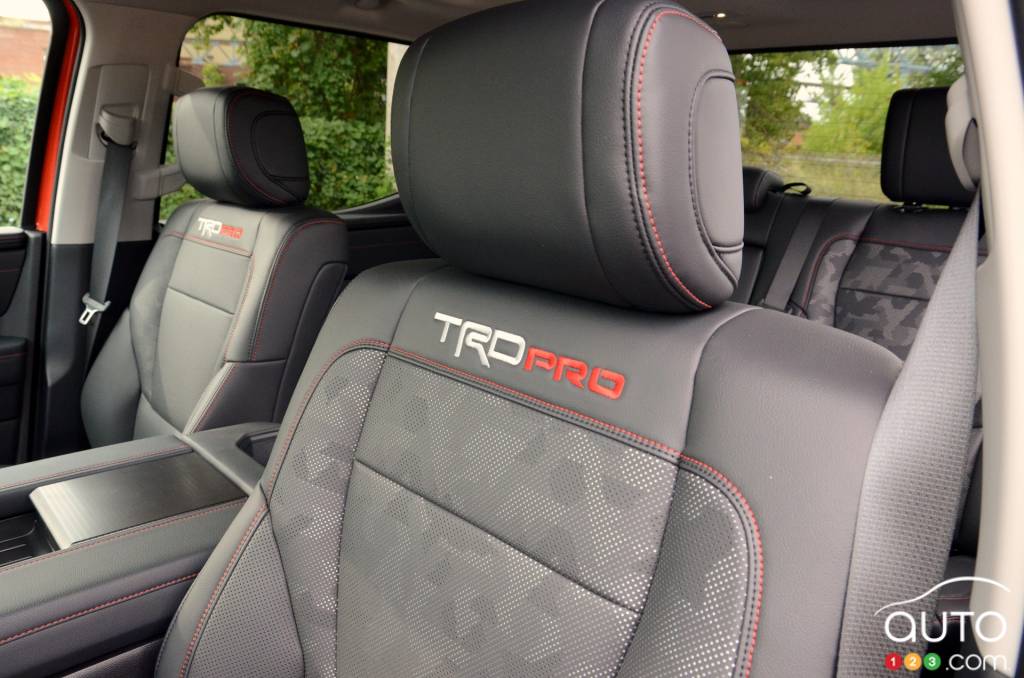 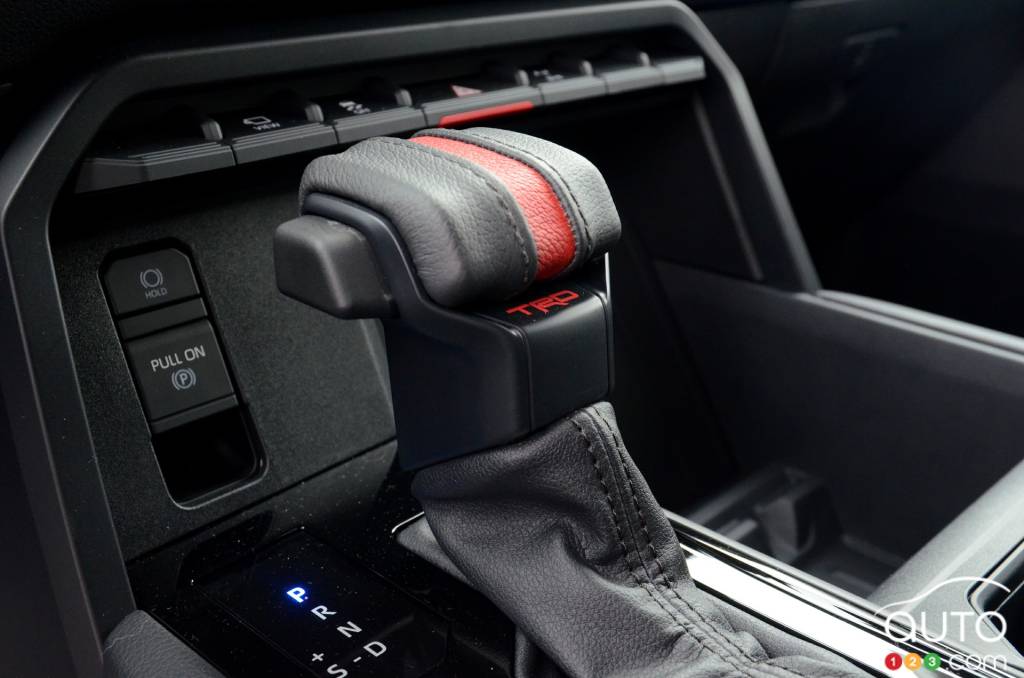 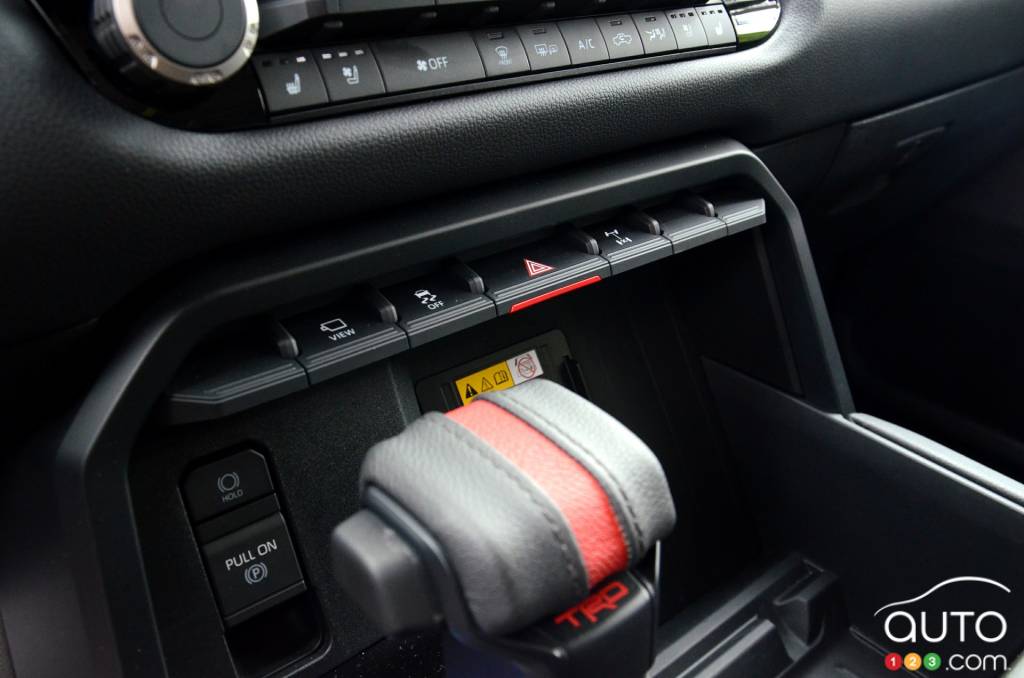 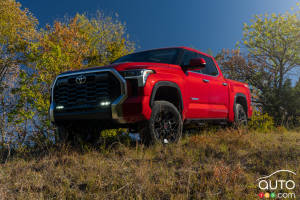 Toyota Offers Lift Kit for Tundra to Raise it by 2.6 inches

Toyota now offers a lift kit so owners of some versions of the Tundra pickup can raise the ground clearance of their truck. For truck buyers on a budget, thi...