Two of the most popular SUV models currently on the market, the Ford Explorer and the Jeep Grand Cherokee received Poor ratings from the Insurance Institute for Highway Safety (IIHS) during front –impact crash tests that subjected 25% of the vehicle’s front end, on both left and right sides, to an impact with an immovable barrier at 40 mph (66 km/h).

A few years ago, IIHS crash tests were designed so that the contact point of the impacts was 40% of the front part of the vehicle. More recently, the organization instituted a second category of small overlap tests that changed the contact point to cover one-quarter of the fascia.

This led to the realization that some vehicles protected their occupants very well during straight-in collisions, but less so when the frontal collision’s impact point was 25% or less of the vehicle’s front end.

The real problem, the IIHS discovered, was that some manufacturers, in a bid to control costs, were reinforcing the driver’s side while neglecting the front passenger side.

It was then decided to conduct tests on both front ends of the vehicle, left and right.

It was such a test that the two SUVs flunked. These results will surely make some consumers hesitate before signing on the dotted line, and will compel the manufacturers concerned to head back to the drawing board to fix the design flaws highlighted by the test.

In the case of the Ford Explorer, the reinforcements on the two sides of its front end are not symmetrical. During the test, an intrusion into the cabin equal to 15 in (38 cm) was noted. This, according to IIHS experts, is enough to cause injuries to the right hip and to the lower part of the left leg. 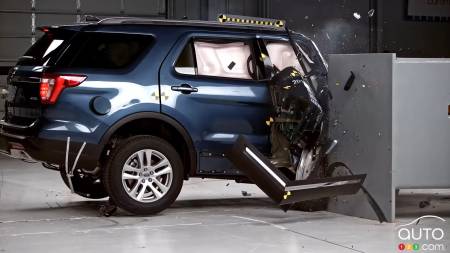 The Explorer did not perform well on the driver’s side either. Fortunately, Ford is currently working on designing the next generation of the model, and it has stated that the next edition will offer improved protection, on both sides.

As for the Jeep Grand Cherokee, a maximum intrusion of 10 in (25 cm) was recorded in the lower part of the door. The IIHS report further notes that “more alarming was what happened to the passenger dummy's head. It hit the dashboard hard through the front airbag and then, because the side curtain airbag didn't deploy and the door opened, it moved outside the vehicle during rebound."

Looking for a safer option for your SUV purchase? The IIHS gave the GMC Acadia, Kia Sorento and Volkswagen Atlas models a Good rating, while the Toyota Highlander, Nissan Pathfinder and Honda Pilot earned the rating of Acceptable. 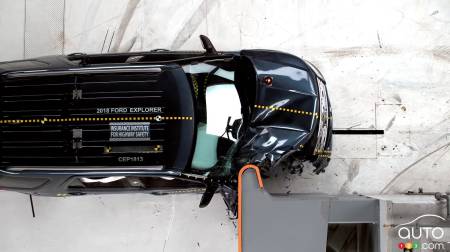 The forecast this fall is for hot, at least in terms of the quality vehicles the auto manufacturers are preparing to present to consumers. Auto123.com gives ...

The 2020 Ford Explorer obtained a weak score in the small-overlap crash test performed by the IIHS and misses out on the agency’s Top Safety Pick rating. Whi...