Last week, on May 22nd, an explosion caused a major fire at the Meridian Magnesium Products plant in Eaton Rapids, Michigan, severely damaging the factory. This plan supplies moulded parts to a number of automotive manufacturers for a range of models, including the Ford F-150 truck.

Ford has halted production of that model at its assembly plant in Kansas City, which employs 3,600 people, and will likely follow suit at its Dearborn, Michigan facility this week, where 4,000 workers are employed.

Taken together, Ford will be forced to delay regular weekly delivery of 15,000 vehicles. More ominously, analysts are saying that delays could continue for several weeks.

The supply problem has also affected the other two big American manufacturers, FCA and General Motors, as well as BMW and Mercedes-Benz. But the problem for Ford in particular is that the F-150 is its most profitable product. Financial firm Morgan Stanley recently evaluated that the value of the franchise was higher than that of the rest of the company. The two assembly plants that manufacture the F-150 generate a combined $40 billion in revenue annually. 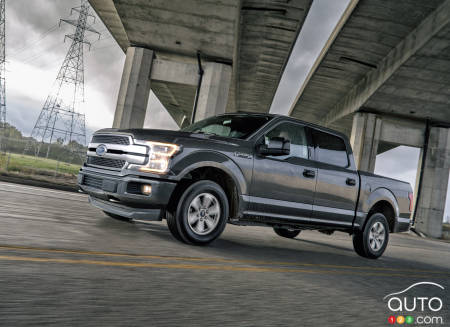 Ford is obviously looking for solutions that can be implemented rapidly. The company will likely be forced to call on another supplier for a time to get the parts it needs. The absence of even one component is sufficient to halt the production chain.

Meridian Lightweight Technologies also has a factory in Ontario, and could represent a temporary solution for supplying parts.

The good news for Ford is that dealer inventories are currently 84 days on average, which will ensure supply for consumers at the retail level over the short term.

If the situation drags on for more than 30 days, however, consumers will likely begin to be deprived of the models they’re nterested in. enerally this starts to happen when stocks drop below the 50-day mark.

Ford sold 287,000 units of the F-Series trucks during the first four months of 2018, an increase of 4% in comparison with last year.

It’s expected that once the supply problems are resolved, Ford will increase the rate of production of its popular pickup.