The SL from Mercedes-Benz is like a bridge connecting the brand's past and present. The origins of the model stretch back to 1954, and over the decades, iconic versions have followed in succession. Perhaps none was more notable than the variant offered for two decades, between 1971 and 1989.

Times change, however, and in recent years the model, while still extraordinary, has seen its segment become less popular in the marketplace. Something had to be done to bring it back to life and that's what we got to see at the presentation of the seventh-generation product.

First of all, good news for V8 engine lovers: the German roadster still offers it. To achieve this meant handing it over to the Mercedes-AMG group. We're already tying up our hats; the grand tourer becomes a pure sports car.

The model also gets a cloth top (a 46-lb weight reduction), two rear seats and all-wheel drive (standard) for the first time in its history.

In terms of design, the coupe's proportions have changed quite a bit. The SL still has a long hood, small trunk lid and short overhangs at the ends. Its bumper is in keeping with the current Mercedes-Benz styling language. At the rear, the lights are integrated into a more rounded presentation and a massive air diffuser is also present.

The model does not share a single component with the last-generation SL or the roofless version of the GT, though the styling of that model did serve as inspiration. 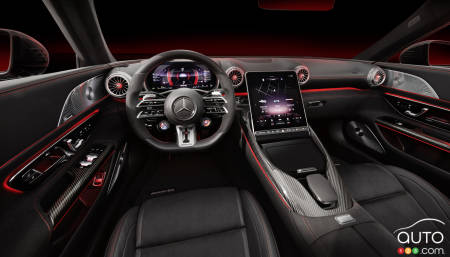 When it comes to technology, drivers will discover a digital display on the dashboard with a 12.3-inch screen. The centre console is dominated by an 11.9-inch touchscreen unit that integrates the MBUX (Mercedes-Benz User Experience) multimedia system. Interestingly, the screen can be electronically tilted from 12 to 32 degrees to reduce glare.

The rear seats make a comeback on the SL, but it's for show. It will be more useful for dropping golf bags into than anything else.

A 9-speed automatic transmission and performance-tuned 4Matic+ all-wheel drive will be included. This system is fully variable, meaning there is no fixed torque split between the front and rear axles; power is relayed as needed. Steerable rear wheels are standard on both models, and the SL 63 gets a limited-slip rear differential.

AMG has announced that a hybrid system – presumably the one debuted with the four-door GT – will be available at a later date.

The 2023 SL is expected in the early months of next year. Pricing has yet to be announced, and we'll have to see if there are any differences in the Canadian lineup. 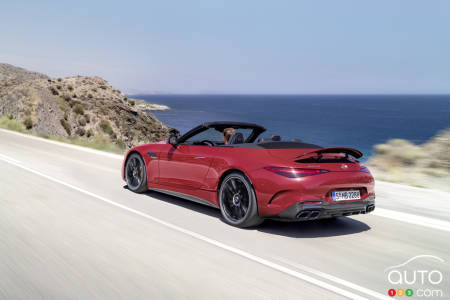 Mini has shared photos of the next-generation Cooper, dressed in camouflage. The model is instantly recognizable, of course, and it’s possible to spot some n...