As much as we talk about model safety these days, there are sometimes accidents where even the strongest car in the world couldn't save the lives of its occupants. And then, there are those miracles that happen, like this terrible, violent accident earlier this week in Washington State. The 46-year-old woman behind the wheel of the crushed Nissan Altima you see here not only survived, she reportedly suffered only minor injuries.

The photo, shared by Washington State Police Officer Rocky Oliphan, makes it hard to imagine anyone could have survived in the middle of such carnage.

The accident, which occurred on the bridge over the Skagit River in Mount Vernon, north of Seattle, Washington, involved a semi-truck and what was a 2015 Nissan Altima. The truck struck the car from behind and then climbed on top of it.

And the accident was unimaginably brutal. Washington State Patrolmen told the Seattle Times that the woman's car was following a semi-truck that slowed down in front of her. She did the same, but it was the truck following her that crashed into her car. It pushed her into the back of the first truck, folding the back of the car in on itself. And then the guilty semi-truck landed on top of the smashed Altima.

We can only guess that a type of bubble formed as the car got crunched up, allowing the woman to have a space to avoid being crushed. Simply amazing. 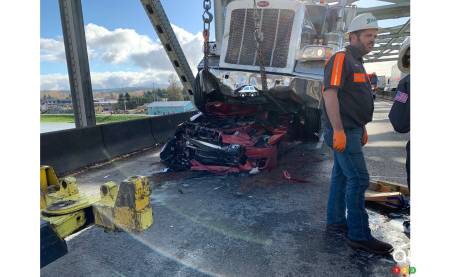 The photos provided by Rocky Oliphant make it hard to even identify the model. Witnesses at the scene were unanimous in saying they had never seen anything like this, let alone such an accident leaving a survivor.

Police officers stopped traffic in both directions, because activity on the bridge was causing the truck to shake while the driver of the Altima was still trapped inside. When a tow truck lifted the semi, the woman was able to extricate herself. She reported feeling only mild chest and head pain, Rocky Oliphant said. She was taken to the hospital out of precaution.

Rocky Oliphant said the truck driver was found at fault for following too closely. A $189 fine.

Something to think about.

A suspension problem affecting some 374,000 2013 Nissan Altima cars is being looked into by the NHTSA. There have been reports of components of the rear susp...