Rumours are common currency in the automotive industry, to say the least. Some merit sitting up and taking notice of, while others are to be taken with varying degrees of salt. Some deserve to be dismissed out of hand.

This week’s featured rumour involves the presentation of a new small SUV from Alfa Romeo, said to be scheduled for the Geneva Motor Show, and it almost fits into all three of the above categories all at once – except for one element that gives it some credibility.

Let’s be clear: Alfa Romeo has neither announced or confirmed anything about what it intends to present in Geneva. The current report comes courtesy of the Autoblog website’s Greek division.

That outlet reports that the new SUV would position below the Stelvio in the Italian-American firm’s hierarchy of models. Anonymous sources told the website’s sleuths that the model would sit on a modified version of the platform that underpins the Giorgio sedan. This architecture also serves as the basis for the Stelvio and Giulia models. 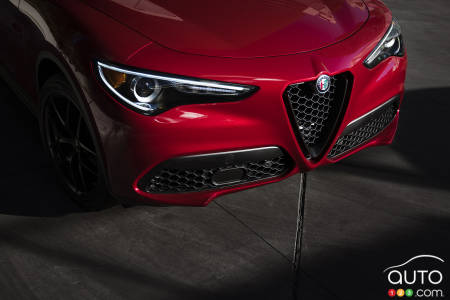 If that’s so, it means that we can expect a rear-wheel-drive vehicle, although all-wheel drive will undoubtedly be part of the product offering as an option.

Mechanically, it’s likely a 4-cylinder engine would be at the heart of the model’s powertrain, but whether a V6 would also be made available is impossible to predict. One certainty is that the addition of a small model to its SUV lineup would allow Alfa Romeo to boost overall sales. And if it wants to reach its stated 400,000-unit annual sales target, the automaker needs some big-time help, and soon.

So how big a grain of salt should this rumour by taken with? A little trip back in time will give us an idea. Recall that in June 2018, during the presentation of the FCA Group’s five-year plan, the plan to develop a small SUV slotting in below the Stelvio was in fact mentioned.

Sometimes the smoke that accompanies a fire takes time to make itself shown. In any case we’ll know more soon enough, as Media Days at the Geneva show take place in March. We should also learn then if the new model will make its way across the Atlantic to our market. If we had to bet on it, we would say yes, but it’s no certainty.

Since we initially reported on this story, Alfa Romeo has contacted us with an official statement regarding its presence at the Geneva show:

"Alfa Romeo will be at the Geneva Motor Show in full force with our award-winning lineup and something new up our sleeves as well. We're excited to show everyone a taste of what’s next in the world of Italian performance and luxury. Stay tuned on March 5 to see a glimpse into the next chapter of Alfa Romeo's legendary story."

The Next Dodge Journey To Be Built on an Alfa Romeo Base?

The Dodge Journey is overdue for a big revision, so it’s not surprising to see rumours begin to crop up regarding what the future holds for the model. Right ...

Alfa Romeo is adding another utility model to its roster. Today it unveiled the Tonale SUV concept at the 2019 Geneva Motor Show. The model signals the compa...

The 2019 Alfa Romeo Stelvio SUV (including the Stelvio Quadrifoglio) remains unchanged on the outside for the new model-year but gets updated with newly-stan...