In the not-too-distant past, Apple was at the forefront of efforts to develop fully autonomous vehicles. Rumours floated persistently for years to the effect that the company was working on its own self-driving car.

If there was a company with the means to carry through on such ambitions, it was surely Apple. Company co-founder Steve Wozniak was one of the fiercest proponents of the new technology.

But times have changed. Wozniak is now saying that, in his view, there are simply too many unpredictable variables that vehicles come up against on public roads, and that automated systems cannot be made to handle these variables as effectively as humans. He now believes that the systems being developed are best suited to providing extra safety nets to human drivers in various situations.

"I stepped way back [on] this idea of Level 5. I've really given up. I don't even know if that will happen in my lifetime."

In his view, fully self-driving vehicles could be usable "if we were to modify roads and have certain sections that are well mapped and kept clean of refuse, and nothing unusual happens and there's no road work."

He added that he thinks the industry has erred in leading people to believe that autonomous vehicles can function like humans’ brains, when this is simply not the case.

This is certainly an interesting viewpoint from someone who spent years in the field, that will certainly ignite some real debate on the question of self-driving systems. These systems are increasingly present in modern vehicles, and they’re gaining in effectiveness. But the leap from that to ceding total control of a motorized vehicle to a machine is a big one, and no one has managed to make that leap up until now.

We’ll see if Steve Wozniak’s thoughts prove prescient or misguided in another 5, 10 or, more likely, 15 years. 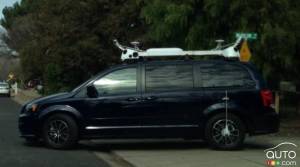 Apple may be working on autonomous vehicles (video)

Strange-looking minivans equipped with cameras and tested by Apple have recently been spotted in the streets of San Francisco and New York. Is the company de...

With the help of a few hundred XC90 SUVs, Volvo Cars and Chinese firm DiDi Autonomous Driving are embarking on a new pilot project surrounding the developmen...

Attention, Canadian drivers: Hyundai and Kia are now recalling 254,784 and 106,098 vehicles, respectively, because the stop lamp switch may fail and cause in...