One does find, across the Audi product line, a range of model variants, but these involve mostly performance-oriented differences, not distinct styling approaches. The result is that the German automaker is a few players short of being present in every niche its rivals compete in.

According to Autozeitung.de website, Audi is preparing to take the first step towards correcting that situation. The company is said to be working on development of a Sportback version of the Q5 SUV.

Current speculation is that the Q5 Sportback will get a premiere presentation this fall and then debut at German dealerships in the spring of 2021. The new variant will be developed alongside a refreshed version of the regular Q5.

Spy photos have showed the regular Q5 with a camouflaged face and rear, which hints at mid-cycle upgrade for the model. The German website reports says the SQ5 Sportback version is also on the way and will place more emphasis on performance.

The Q5 Sportback would allow Audi to offer a response to BMW with its X4 and Mercedes-Benz with its GLC Coupe. When the Q5 Sportback does arrive, it will of course benefit from the same elements that will be introduced for the first time in the updated version of the regular Q5.

Mechanically, we can expect to see the model’s current powertrains to be reworked. The Q5 is available in Canada with a 2.0L 4-cylinder turbocharged engine or a plug-in hybrid powertrain offering more power. Audi's quattro all-wheel drive system is part of the equipment.

With the current global situation as affected by the coronavirus outbreak, it's difficult to predict the exact timing of the vehicle's introduction. If things do pick up before the fall, it will most likely be at the Paris Motor Show. If not, patience will be in order. 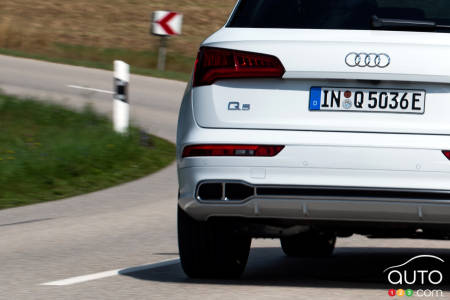 Seven New SUV Variants From Audi by the End of 2019

Audi says it plans to introduce seven new variants of existing SUVs before the end of 2019. The news comes hard on the heels of the company’s announcement th...

Audi is the last member of the "Other Big Three" to jump on the premium compact SUV bandwagon. As one of the segment pioneers, BMW is already firmly establis...

If we believed everything the carmakers told us, it'd be hard to determine whether BMW, Audi or Mercedes-Benz in fact had the 'best' central command interfac...