BMW’s new 8 Series is barely on the market, but already the German automaker behind it is preparing a four-door Gran Coupe version. The official reveal will take place in Munich this coming June, but the company decided to send out a little teaser beforehand.

The coming of the Gran Coupe has been common knowledge for months. Images of prototype versions have been bouncing around the internet for months, and BMW even presented a concept version called the M8 Gran Coupe at the last Geneva auto show. 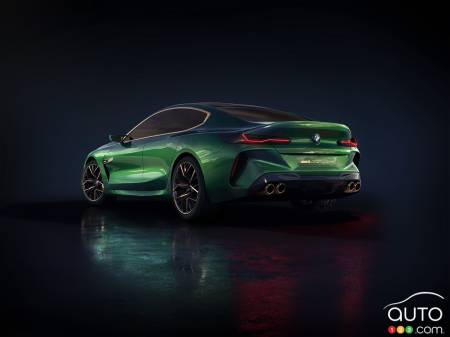 Clearly, a production version was inevitable, and due in short order.

As with other of BMW’s Gran Coupe versions, the 8 Series four-door is derived from the coupe, but basically gets a modified back end. Frankly this version looks to have more harmonious proportions thanks in good part to the extended, sloping roofline. The wheelbase of the Gran Coupe has als o been extended.

What makes the modification possible is the CLAR (Cluster Architecture) platform the model is built on. That structure uses a lot of steel, aluminum and carbon fibre, and most importantly it’s flexible so that it can accommodate different hybrid or electric powertrains.

The carbon fibre elements will certainly make for a more lightweight car, but that’s relative; we’re still not talking about a petite creation here. The coupe version of the new 8 series weighs 4,478 lb, and the stretched four-door variant will certainly surpass that.

The mechanics of the model will likely be based around the 4.4L V8 turbo in service in the M850i, and which delivers 523 hp in that model. Another option will probably be BMW’s 3.0L 6-cylinder turbo engine. As for that highly anticipated M8 Gran Coupe that will eventually appear, it would get the same V8, but with an output of more than 600 hp. Lastly, plans include a plug-in hybrid version.

Once the 8 Series Gran Coupe is among us, it will be contending with rivals like the Audi A7 Sportback, Maserati Ghibli, Mercedes-Benz CLS and AMG GT 4-door and of course the Porshe Panamera.

BMW has finally unveiled the new 8 Series Gran Coupe version. Although this version is largely without surprises, it will be a fearsome opponent for its riva...