Since 2015, we’ve seen the majority of automakers integrate compatibility with the Apple CarPlay and Android Auto applications in their vehicles’ multimedia systems. The overwhelming popularity of these apps, which allows for syncing many phone apps with the vehicle, has made compatibility with them a big selling point for many consumers.

Two of the laggards in adopting the systems were Mazda and Toyota. You can also count BMW among those, which until now has integrated Apple CarPlay compatibility but not Android Auto.

That is now set to change, starting in mid-2020. The German automaker has announced that compatibility with Android’s app will be included in its new vehicles as of July of next year. It’s also touting the fact that the integration will be done wirelessly. The only catch is that the vehicle must be equipped with BMW’s most recent 7.0 version of its multimedia system.

Additionally, the integration can be used together with vehicle’s digital instrumentation systems, including the head-up display – which means the ability for users to view the information they want, where they want. 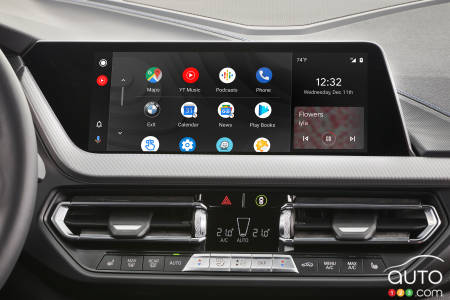 “Many of our customers have pointed out the importance to them of having Android Auto inside a BMW for using a number of familiar Android smartphone features safely without being distracted from the road.”

For those who are impatient to see the system in action in a Beemer, the first demonstration of the BMW/Android Auto marriage will take place at the next Consumer Electronics Show (CES) in Las Vegas next January. Starting in July, consumers in 20 countries will be able to use their Android Auto app in their BMW, with other markets sure to follow shortly thereafter.

Apple CarPlay, Android Auto Compatibility to be Offered i...

You can now retrofit your older Mazda with Apple CarPlay and Android Auto compatibility! During a presentation organized by Mazda Canada to present the new t...

No matter which 2017 Ford vehicle you buy, you’ll have access to SYNC 3 featuring Apple CarPlay and Android Auto compatibility.