•    The letters GS stand for Gran Sport and have always been used to identify performance variants.

•    Buick's first EV (for North America) should be introduced before the end of the year; the Electra is set for 2024.

It's common to see automakers registering patents on nameplates that could be used for future models. Sometimes it doesn't lead to anything, but quite often, it does.

In the case of the name Electra already reserved by Buick, the company has confirmed it will launch a model returning that name to active service.

Now we also know that the letters GS will make a comeback, almost surely to identify the sportier versions of the electric models to come from the GM brand.

The GS letters
They stand for Gran Sport, and they have a history going back to 1965 at Buick. Notably, it was used to designate the brand’s muscle cars until the early 1970s. It has popped up again periodically since then, most recently with the Regal sedan in 2018. Now we know it will accompany the Electra name on the division's future EVs.

Back in June, General Motors (GM) confirmed that Buick's electric models would carry the Electra name. Each model will then be named with an alphanumeric suffix to designate its size and body style. With some, the letters GS may be added for the most powerful variant. 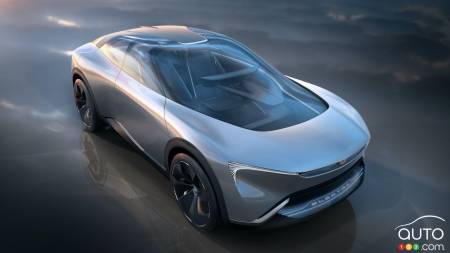 Electra-fication
Of course, we'll have to be patient before we see anything on the road; Buick's first electric model isn’t expected until 2024. However, Buick is expected introduce a first version of it before then, possibly at the Los Angeles Auto Show in November. Remains to be confirmed…

When you think about it, we are about to witness quite a transformation of the over-100-year-old brand. Along with its transition to electric powertrains, Buick has adopted a new logo, and it has made clear it now wants to address a much younger clientele.

The dealer network may also change, GM having indicated it is ready to buy out dealers who do not want to make the transition to electric (and all the investment that entails).

Buick's first electric vehicle is expected to be an SUV - no surprise there - and it will built on the Ultium platform that will serve many models within the GM group, including the new Chevrolet Blazer EV and Chevrolet Equinox EV.

Buick is recalling close to 24,000 Regal sedans – 2,130 of them in Canada - due to an issue with the software governing the brake system. Basically, brake as...

2018 Buick Regal Sportback Review: At the Intersection of...

Hatchback? Sportback? Fastback? Four-door coupe? Five-door sedan? We put the 2018 Buick Regal Sportback to the test to see how this sedan-with-a-hatch stacks...