It’s no secret, Buick is a popular brand in China. That the GM division chooses that country to premiere one of its core models is therefore no surprise. So it is that the Shanghai auto show was the setting for the world debut of the second-generation Encore SUV.

The new edition’s visual signature is taken from the Enspire concept introduced by Buick last year. The overall look is bolder but also more harmonious in comparison with the current Encore, whose proportions always struck many as odd.

The Shanghai presentation also included a second version of the Encore, with the GX lettering on the back. Its stretched body is a highly popular format in China, where many owners like to be chauffeured.

"With the two new additions, the Encore family will offer an unprecedented choice in its segment." As big in China as the Encore is, its place on the North American market should not be underestimated. The debut of the little SUV in 2012 marked the beginning of Buick’s renaissance on our continent. Last year, the Encore accounted for half of the brand’s sales in the U.S. – proof that American buyers are willing to fork over for a vehicle made in China as long as it meets their needs.

It remains to be seen what plans Buick has for the new Encore in North America, but given the resent sales success of the model, it’s almost certain that we’ll see it at local dealerships before too long. Whether it will undergo any visual changes before it does is not known.

We’ll have more details about the model for you when its North American debut approaches. 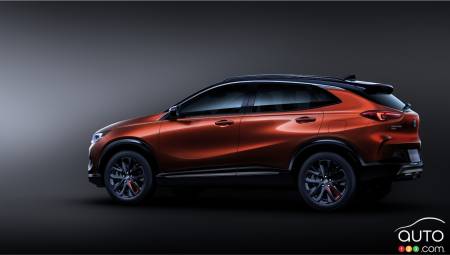 Chevrolet officially rolled out the replacement for its departing Trax SUV at the Shanghai auto show. The new SUV carries a familiar name: the Trailblazer.