We’re on our way at this very moment to the 2019 edition of the New York Auto Show for the slew of big media presentations being put on by the auto manufacturers over the next two days. But there’s no sleep for the wicked, as they say, because on the other side of the world the Shanghai auto show is in full swing right now.

GM has bene particularly busy this week, and one of its big premieres reveals a new model bearing an old name. The just-revealed Trailblazer is, this time around, a compact SUV, come to replace the departing Trax, a model that never really won over a sizable audience.

Visually, the new Trailblazer borrows several elements from its larger sibling the Chevrolet Blazer, itself also brand-new. Particularly closely matched are the front grille and the space between the front headlights. The rim shown in Shanghai is the Redline version, decked in 17-inch wheels.

The Chevrolet Trailblazer rests on the automaker’s new VSS-S modular platform. That architecture, one of four the company intends to use for its products by 2025, is highly adaptable and will serve any number of SUVs from General Motors divisions. 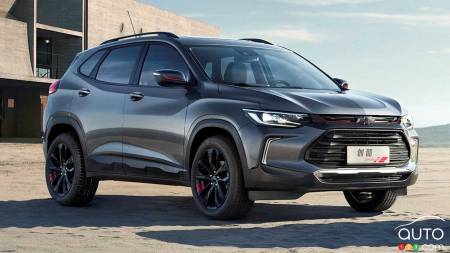 The same presentation in Shanghai saw Chevrolet reveal a second new vehicle, the Tracker. An attractive-looking small utility model, it is not expected to make the leap to the North American market, however. According to GM, it was conceived mainly for emerging markets.

We can only lament that decision.

As for the Trailblazer, it’s expected at dealerships later this year as a 2020 model. More details to come…