Buick, as we know, is very successful in China. So much so that unique models designed for the market are offered over there.

Normally, we would introduce it without making too much of it, but there is something interesting about this new SUV, thought and developed for the young generation of Chinese consumers. Buick says it introduces a new styling language that will be carried over to the brand worldwide. The latter is inspired by the Electra-X concept that we've already had the opportunity to see.

As far as the design is concerned, nothing jumps out at us, except for the headlights, perhaps, and the fact that the model looks nothing like a... Buick. Mind you, if the brand wants to move on in North America, that's what it takes; a complete rebranding to appeal to new and younger buyers, especially in the context of an electric shift.

On board, Buick describes the environment as very airy. The dashboard is dominated by a dual 10.25-inch screen with an all-digital instrument cluster. There are traditional buttons for the climate control system and basic audio controls.

Mechanically, the Envista benefits from a 1.5-liter turbocharged 4-cylinder engine that delivers 181 horsepower. A continuously variable transmission (CVT) is mated to it. Buick claims an average fuel economy rating of 6.5 L/100 km.

We won't dwell too much on the model that is not marketed here, but we can always refer to it to find similarities with the styles that the brand's future products will borrow. 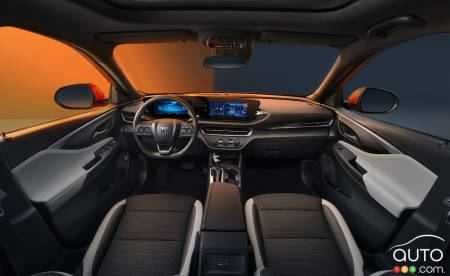 A First Encounter with the 2023 Imperium SEV

Auto123 had a first opportunity to get up close and into the 2023 Imperium SEV, the all-electric Chinese midsize crossover coming to Canada later this year. ...