CAA-Québec has just implemented a new roadside assistance service that will provide on-the-spot recharging for motorists whose electric vehicle is out of battery power.

Under the program, CAA members whose vehicle’s battery system runs out of charge can have the roadside assistance provider dispatch a special vehicle to their location, and obtain a charge giving them a 40-km range in around 15 minutes. There is no extra cost to benefit from this pilot project for CAA members.

“We’re seeing a growing number of electric vehicles, and they’re here for keeps…. While vehicle range may still be a major concern for those who hesitate to go electric, we’re sending a very clear message: in the event you run out of power, CAA-Québec will be there to help you.” 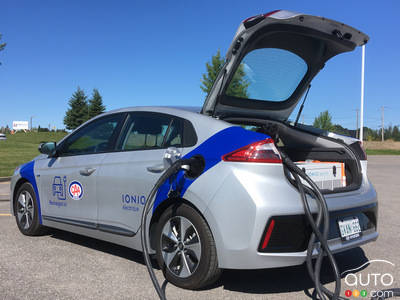 The vehicles used by CAA-Québec for the pilot project are Hyundai IONIQ electric cars specially adapted for mobile recharging. Two are based in Montreal (and will serve Laval as well), and the other is in Quebec City.

Only certain models for now
Technological restrictions mean that for now, the only compatible vehicles that can make use of the program are those equipped with a Combo connector, namely the BMW i3 and i3 REX, Chevrolet Bolt EV, Ford Focus electric, Hyundai IONIQ and Volkswagen e-Golf.

CAA-Québec says that in the case a vehicle incompatible with mobile recharging runs out of power, it will simply be towed to a public charging station or to a location chosen by the member.

Sun Country Highway is expanding its network of public charging stations with 20 new 240V stations along the 401 Highway in Ontario, allowing EV users to con...