The renewal of the Escalade by Cadillac led strong demand for the big SUV. That in itself was not surprising – it’s a common occurrence whenever a model’s new generation launches. Cadillac racked up 6,000 orders for the 2021 edition before it was even at dealerships.

A year later, it's still going strong. And the beauty of it for Cadillac is that buyers are most interested in the Platinum version, the most expensive (and most profitable) of the lineup. Interest is so strong that the company can't keep up with orders for this version, according to Muscle Cars and Trucks.

The publication was told by Escalade global marketing manager Dave Schiavone that buyers are “disproportionately” choosing the range-topping Platinum trims, which sell for just over $120,000 in Canada (some $20,000 more than the base version).

Note that the sales data shared by the site refers is for the American market, but it would be surprising if it were much different here. Buyers looking for this type of vehicle tend to want to go for the full package. 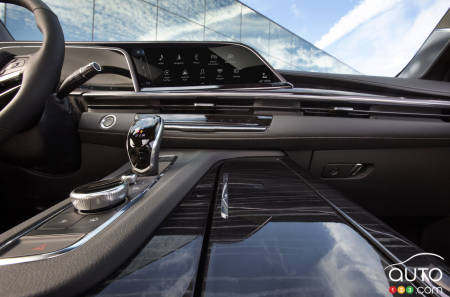 And the model has a lot to offer, needless to say. The Escalade's redesign for 2021 saw the iconic Cadillac get an exterior update, but more importantly, its interior was completely redesigned and greatly modernized. The big emphasis has been on luxury and technology, to the point that there are three OLED screens on board, units that together span a total of 38 inches across the dash in front of the driver. The navigation system uses augmented reality, the cruise control system has a Super Cruise function and the audio system has 36 speakers (optional).

And there’s more. Because there has to be more. There’s also a V version reported to be in the works; it would use the 6.2L supercharged V8 (668 hp) from the CT5-V Blackwing.

Cadillac really has a great problem on its hands with its Escalade.

The fifth-generation 2021 Cadillac Escalade is now an ideal vehicle to enjoy long highway rides, As spacious as it is expensive, it is in its new incarnation...

The Cadillac Escalade could have 3 engine choices for 2020

Sold in its current form since 2015, the Cadillac Escalade will be getting some revisions for the 2020 model-year, including three different new engine opti...