The current iteration of the Escalade luxury SUV dates back to 2015. Though the model is far from outdated, its age may start to show in the very near future, especially since over at eternal rival Lincoln, a totally renewed Navigator has just made its debut. Cadillac won’t be able to rest on its laurels for long.

It’s no surprise then to hear talk of changes under the hood for the 2020 edition. There will be some esthetic changes as well, of course, but the most significations updates will have to do with the SUV’s mechanics, which include only one engine choice at present.

The current engine is a 6.2L V8 generating 420 hp and 460 lb-ft of torque. According to Cadillac Society, a site devoted to all things Cadillac, this engine could be retooled for increased output for the 2020 model year. Most notably, it could be accompanied by two other powertrain choices.

The fisti s the one that will debut in the V performance version of the Cadillac CT6, a sedan first displayed at the last New York auto show earlier this year. We've since spotted it being road tested in camouflage somewhere in Arizona.

This 4.2L twin-turbo V8, which will be wedded to a 10-speed automatic transmission, will have an output of 550 hp and 627 lb-ft of torque in the performance sedan. We don’t know at this point if the Escalade with this engine will get a V designation.

As for the other engine, word is that it may be a plug-in hybrid option, likely the unit currently in use in the CT6’s plug-in hybrid version. This consists of a 4-cylinder turbo combined with two electric motors, with a total output of 335 hp.

It’s very likely that the Escalade will be a vastly transformed vehicle in 2020, inside and out. Esthetically, it’s expected that it will incorporate some elements of the Escala concept. 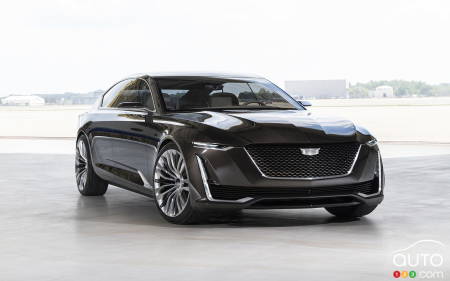 10 Things to Know about the New 2021 Cadillac Escalade

Auto123 headed to the City of Angels to meet the redesigned 2021 Cadillac Escalade, in the company of actor-director Spike Lee. We finally got to see up clos...