The Canadian Truck King Challenge is an annual competition pitting the latest new pickup truck models offered on our market against one another in a series of tests. Organized by our Ontario-based colleague, Howard Elmer, the private event has taken place every autumn since 2006 in a region north of Oshawa, Ontario. Without a doubt, it is one of the most elaborate automotive testing events ever put on by journalists in the industry.

This year’s edition was particularly noteworthy because of the high number of new models, generations and editions available to consumers. In fact, of the six pickup models chosen to battle head-to-head during the 2018 Challenge, three are all-new, while the others benefit from substantial updates.

Take note that all entrants in the Challenge are four-wheel-drive pickups with crew cabs and short beds – which happens to be the most popular configuration among consumers in this segment. 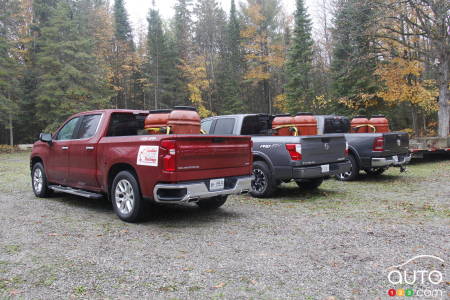 The vehicles
The six pickup trucks, each of which was supplied by their manufacturer, included Ford’s popular F-150 Supercrew Lariat FX4 and its new 3.0L PowerStroke turbodiesel engine. Ford is the only manufacturer to offer a diesel engine in its light pickup this year (though RAM will be bringing its diesel engine back next year). This engine is wedded to a 10-speed automatic transmission. 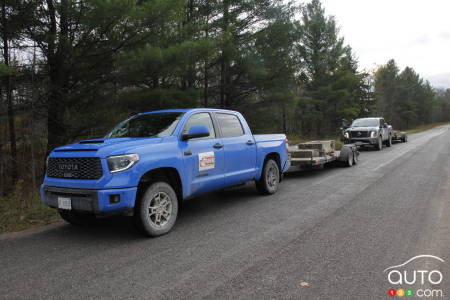 The judges
The “star chamber” of truck experts on hand to test out each of the models this year was led of course by Howard Elmer, a contributor to the Motoring 2018 TV program as its resident pickup specialist. He was joined by his son Stephen, a journalist specialized in the domain who writes for an American publication and Clare Dear, a veteran journalist for the London Times who is also expert in the truck domain.

Mario Cywinski, pickup specialist and journalist of MRO Publications, was also on hand, as was yours truly, Éric Descarries, truck specialist for Auto123.com, L’Écho du Transport, Adrenaline and other publications based in Quebec.

For the most part, each of our group of journalists has a dozen or so previous editions of the Canadian Truck King Challenge under our belt. 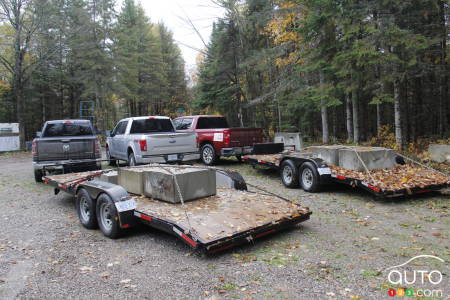 Methodology
The judges were called on to drive each pickup, first without any cargo, then with a load of around 1,000 lbs in the bed, and finally while towing a load of 7,000 lbs. Last to come was a short drive on an off-road trail.

With the exception of the final off-road drive on a specially-set-up private circuit, the judges were to drive the trucks on a 19-km circuit, the first third of which was a gravel surface, the second a small winding road, and the third a faster-speed portion of a provincial road (speed limit: 80 km/h).

As it happens, and as seems to happen every year during the Challenge, it rained on the first day of testing. That said, the participants were mindful to drive the trucks as if they were their own, which is to say with care. As there were more vehicles than judges, each of us took a few turns riding as passengers, giving us the opportunity to evaluate the rear seating and such. 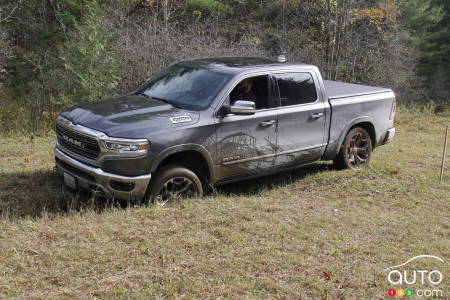 The second day gave us more clement weather (though the morning was bitingly cold!), providing a great opportunity to test out the trucks’ towing and off-road capabilities. By the way, the off-road testing was not intended for performing driving acrobatics, rather we sought to rate the abilities of each pickup on worksites and in difficult conditions.

The pickups labeled as conceived for off-roading (the Ford FX4, Tundra TRD and Nissan Pro 4X) were fitted with more-aggressive factory tires, which could have provided them with an edge in muddy conditions, but this proved not necessarily to be the case. 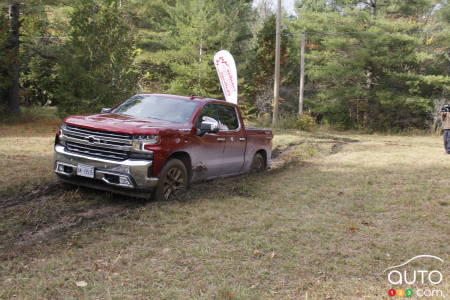 Our observations
As mentioned, the Ford F-150 was the only entrant with a diesel engine; this constitutes the big news in 2019 for this immensely popular pickup. While logically this truck would have bene expected to stand above the other for the power and torque delivered by its small engine, what most stood out for the judges was the quiet sound produced by the V6 engine (also, by the way, the only one of that size among all the other V8s).

The F-150 is equipped with a small retractable stepladder in the body, and with the Pro Trailer function that allows the driver to manoeuvre in reverse while the truck has a trailer attached, without touching the steering wheel. Also worth noting is the fully aluminum body of the Ford F-150.

The RAM 1500 scored points for its outstanding interior, starting with the enormous 12-inch screen on the dashboard. It has features an air suspension system that automatically adjusts the vehicle’s height when a 1,000-lb load is placed on the bed. The pickup has no footboard or small ladder for getting to that bed, however. The truck benefits from exceptional power courtesy its HEMI V8. 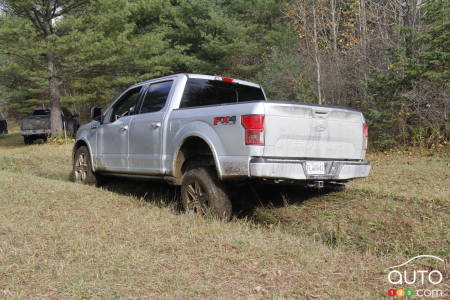 If any of the 2018 Ford F-150’s rivals interests you, the Blue Oval would like you to watch these five videos before you make a choice.